Today I am pleased to welcome you to my first ever author interview!
…And it’s not with just any author, oh no, it’s with one of my favourites…the fantastic Jon Rance.

Jon is the author of the BRILLIANT This ThirtySomething Life (take a look at my review) and the follow-up, This Family Life is released today (30th June) Both of these books are some of my all time favourites, they’re funny, unique, and completely heart-warming. If you haven’t read them yet then I can’t recommend enough that you do!

Hi Jon, welcome to Bookaholic Confessions! Thank you so much for participating in this interview. Would like you to start by introducing yourself…

Hello, yes, it’s a real pleasure to be here. For those who don’t know me, I’m Jon Rance, author of three books. This Thirtysomething Life, which came out in 2012, Happy Endings, which came out in late 2013, and now This Family Life, which comes out today  (June 30th), and is the sequel to This Thirtysomething Life. I write contemporary romantic comedies, although I don’t tend to write your usual straight forward romantic comedies. I like to write about relationships, family, and all the things that go along with these, and I think what makes me stand out from my peers is that I really try and balance out the comedy with drama.

Your third novel, This Family Life, the follow up to This Thirtysomething Life, is released this week – can you tell us a bit about the book?

I’d love to! As you said, This Family Life is the sequel to my debut novel This Thirtysomething Life. I always knew I wanted to write a sequel because I fell in love with the characters from the first book and I wanted to continue their story. Both books are in some ways autobiographical and I use lots of experiences from my own life as a parent. There’s just so much comedy in being a father.

The difference to the first book is that this is a much bigger story. The first book really focused on Harry going through pregnancy with his wife Emily, and the book covered the nine months until they had their baby. This Family Life takes us through their whole first year of parenthood, and includes more characters, some old ones return and a few new ones are introduced. This reason it’s called This Family life is because it focuses on Harry and Emily’s family a lot more. With the introduction of baby William, his grandparents are much more involved than the first book, and so we really see the whole family in all its complicated, hilarious, uncomfortable, and brilliant best. It’s a very real, honest, hilarious and heartwarming story about family life and being a new parent, and one that I hope my readers will be able to relate to and laugh along with.

I loved re-visiting Harry & Emily but how did you find writing a sequel? Did you find it difficult or easier than writing the first book?

Much more difficult! For a start it had been nearly three years since I’d written the first book so I had to go back and read the first book and then try and get back into the characters. It took a while to really get inside their heads again. I also felt this huge pressure to make it really good. I hate bad sequels, we all do, and unfortunately there’s a lot of them around. So for me it was so important to make this not only a brilliant book in its own right, but also a worthy follow-up to the first book. I just hope I’ve succeeded.

How did you find writing books that will appeal to both men and women?

It’s tricky. Men and women are very different in so many ways, and it’s no different when it comes to reading. My second book, Happy Endings, I wrote from both female and male perspectives and I really enjoyed that. I’ve just finished the first draft of book four and again I wrote from both perspectives. I actually love the challenge, and I think if there’s one thing the sexes do have in common is that we both like to see into the world of the other. I think women enjoy books from the male perspective, and I know that men like to get inside the minds of women. We’re all fascinating and it’s my job to bring that to the page.

Now let’s talk about Harry! OMG (as Steve would say) He is an absolutely brilliant character, is he based on anyone you know? Writing from the male perspective do you see elements of yourself in Harry?

Harry is a combination of a few people. There’s definitely autobiographical bits to him, but I think in general I like to think that he’s the best and worst of all men. He tries really hard to be a great husband, and in this book a brilliant dad, but again and again his own stupidity makes his life infinitely more difficult. 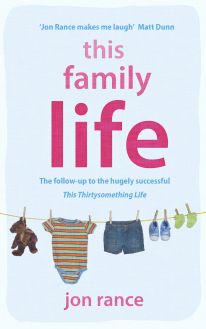 to manage all of the changes going on in his life. What gave you the idea for this story?

The idea for this really came out of my own experiences of being a father. The first year of parenthood is all about survival and I thought it would make an interesting and potentially hilarious book. Also the way the first book went with Harry and his ‘almost affair’ I thought this would give Harry the chance to redeem himself. I mean, he was a bit of an idiot in the first book and made some awful choices, so it’s a new year and a new Harry. Of course, it doesn’t exactly go to plan.

Do you have any plans to write any more books in the lives of Harry, Emily and William Spencer

Definitely. I’ve always thought of it as a three book series, and so I have the idea of writing This Fortysomething Life as Harry turns forty. It’s a few years away because I haven’t turned forty yet myself and I want to write from experience!

There are quite a few tear-inducing moments in This Family Life, especially involving Harry’s Mum. What was it like to write about such serious topics whilst still keeping to the generally light hearted theme of the book?

I think it’s a huge part of my writing. I want to write comedy, but comedy that takes us on a journey and also explores the darker, sadder parts of life. Essentially what I’m always trying to do is write about real life and real life is always made up of happiness and sadness, you can’t have one without the other. What I’ve hopefully done in this book is tackle some serious subjects, but kept the humour. I think the best sit-coms for example always have difficult moments that are serious and remind us that although we’re watching a comedy, life isn’t always sunshine, but that within the drama there’s always moments to smile and laugh.

I’d written a few novels and I tried to get an agent (like the rest of the world) without any luck. So when I wrote This Thirtysomething Life I was tired of spending a year writing a book that no-one was going to read. So I self-published it myself on Amazon. I dreamed of huge success, but in reality a year went by and I’d sold a few hundred copies. It wasn’t going well. I ended up doing the KDP free promotion for five days and for some reason it got to number one on the free chart and sales took off after that.

This all happened around August/September of 2012 and by November I was in the top ten paid Kindle chart on Amazon. Sales continued to grow and soon after I was contacted by a publisher and I ended up signing a two book deal with Hodder and Stoughton. I got an agent soon after and I haven’t looked back.

One of the things I liked most about This Family Life was the fantastic array of characters (especially Steve and Fiona!) Did you have a favourite character as you were writing the book?

I’m really proud of the characters in This Family Life. I knew I had to grow on This Thirtysomething Life. I wanted to introduce new characters and make older characters (like the parents) more involved. I spent a lot of time working on the characters and there are some great ones, but I think my favourite character to write is probably Steve. I love him. He’s just so sweet, innocent, and over the top, and he’s a great friend to Harry, even when Harry’s being a bit of an idiot. I think everyone needs a Steve in their life. He also has the funniest line in the book, and I loved writing the little song he sings about his future career. I should probably write a book about Steve and make him the main character!

And finally – can you tell us about what you’re working on at the moment. Are there any plans for book number four?

Book four is already at the first draft stage. It’s currently with my agent and she’s reading it and hopefully loving it. I can’t say much about it except that it’s another comedy about family. Nothing like This Family Life though. Hopefully I’ll have some news about it towards the end of the year. All I will say is that I really love the story and it’s probably the book I’m happiest with in terms of writing comedy and drama. It’s as funny as This Family Life, but it has much darker and sadder moments that will definitely have you in tears.

Thank you so much for allowing me to interview you for my blog, Jon!

You can buy This Family Life here and if you haven’t yet read Jon’s hilarious debut, This ThirtySomething Life you can get hold of a copy here.