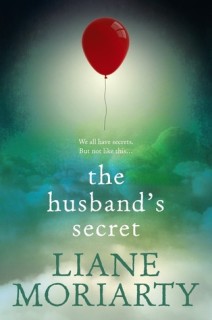 At the heart of the top ten bestselling The Husband’s Secret by Liane Moriarty is a letter that’s not meant to be read . . .

Mother of three and wife of John-Paul, Cecilia discovers an old envelope in the attic. Written in her husband’s hand, it says: to be opened only in the event of my death.

Curious, she opens it – and time stops.

John-Paul’s letter confesses to a terrible mistake which, if revealed, would wreck their family as well as the lives of others.

The Husbands Secret starts off by introducing us to Cecilia, a happily married mother of three and Tupperware party organiser. She has what appears to be the perfect life; however a chain of events lead her to discovering a letter in her attic addressed to her written by her husband, John-Paul, which is only to be opened on the event of his death. What’s written inside is set to change the whole course of her life…
We also follow the lives of Tess, whose Husband has fallen in love with her best friend and Rachel whose daughter died many years ago under suspicious circumstances. The goings on in the story causes all three of the women’s lives to come together and what’s written in John-Paul’s letter will have a lasting effect upon them all.

This is the first book of Liane Moriarty’s I have ever read. When I read the blurb I thought it sounded like a really intriguing plot line. What could that letter possibly say!? There are also glowing recommendations from other authors and I’ve seen a lot written about this book since its release. The phrase ‘couldn’t put it down’ is often banded around but in the case of The Husbands Secret I feel it’s completely justified, because I actually couldn’t put it down.
You don’t find out the contents of the mysterious letter for a while and you’re introduced to some of the other characters and their lives before it’s revealed what John-Paul’s secret is. I didn’t guess what the secret was but needless to say it was very shocking and suddenly everything began to click into place.
I found myself really connecting with all of the characters, despite there being quite a few in this novel. On the whole they were all likeable for different reasons so it was hard not to get emotionally attached to them. Cecilia is definitely worthy of being the central character. It’s fascinating and upsetting to read how her life was turned upside down and seeing how she battles with her conscience once she discovers John-Paul’s secret.
I thought that the way the story came together was fantastic and this is definitely one of those books which you’ll find yourself thinking about long after you’ve read it. I thought that the ending was great and I found the Epilogue fantastic and it really got me thinking… Without sounding like a cheesy reality TV contestant this novel will take you on an emotional journey and you’ll find yourself questioning yourself and your own decisions, I know I did.
I will definitely be reading more of Liane Moriarty’s books. I love how her writing takes you on so many unexpected twists and turns of the story, you can never predict what’s going to happen next and that is a guaranteed formula to keep me gripped!
With her next book, Little Lies, out later this month (pre-order here) I am literally counting down the days until I can read this. I need it. NOW.

I found The Husband’s Secret to be of quite a similar style to some of Jodi Picoult’s novels (which is definitely a good thing!) as when I read her novels I usually find myself asking what I would do in the characters situation and that’s definitely something which Moriarty achieves with The Husbands Secret. Definitely worth a read, but be prepared to put all other plans on hold until you find out the outcome…

Liane Moriarty is the Australian author of five internationally best-selling novels, Three Wishes, The Last Anniversary, What Alice Forgot, The Hypnotist’s Love Story and most recently the global bestseller, The Husband’s Secret which to date has sold over 1 million copies in the US alone and is set to be translated into over 35 languages. CBS Films has acquired the film rights.

Liane’s much anticipated new novel LITTLE LIES will be released in 2014.

Writing as L.M.Moriarty, she is also the author of the Space Brigade books for children, (published in the US as the Nicola Berry, Earthling Ambassador series).

3 thoughts on “Book Review: The Husband’s Secret by Liane Moriarty”