Hello and a big thank you to Holly for having me on her blog. This is stop number eleven for my new book ‘This Family Life’. If you missed the last one you can find it here http://www.renham.co.uk/

In today’s blog I’m going to write about one of my favourite subplots in the book. If you haven’t read the books, the main character Harry Spencer is a secondary school history teacher. In ‘This Family Life’ I decided to send Harry on a management training course. I did this for a few reasons. Firstly, I’ve been on these courses myself and they’re hilarious and so I thought it would be a great chance to add some comedy, and secondly, it was a big part of the plot where Harry becomes more serious about his career.

The management course is run by a man called Colin Thistle and he was such a fun, funny, and slightly sad character to write. Like I said, I’ve been on quite a few training courses for work and the cliché about them being super cheesy and trite is definitely true. I created Colin as sort of a mixture of my own experiences and also I wanted to push him to the limits to extract the most comedy out of the scenes. For me writing comedy is always about creating scenes, characters, and situations where comedy is rife and then just letting my imagination run riot with it.

The flip side of the management training scenes is that Harry is the complete opposite of Colin Thistle. Colin is exuberant, and positives and you’ll see in the excerpt below, completely over the top, while Harry is by nature slightly cynical. The clash of these two immediately created some of the funniest scenes in the book. Below is an excerpt where Harry goes to his first training session, and I really got to go crazy with management sound bites!

No school today because I have management training. I should be excited that I don’t have to spend the day in the classroom and instead get to drink coffee, and eat a ‘continental style’ buffet, while being force-fed government sound bites, but I’m not.

It was worse than I’d imagined. The leadership trainer, Colin Thistle, spent the first thirty minutes telling us that this was going to be different from any training we’d ever had, before he went on to be like every trainer I’ve ever had. I was in a shabby, cold portacabin with ten other HODs, the lame ‘continental style’ buffet, and some watery coffee, and it was five hours of PowerPoint, role playing, group exercises and Colin listing off his favourite management sound bites.

It’s all about moving goalposts (metaphorical goalposts because the one PE teacher got a bit confused).

And pushing the envelope.

And bringing it to the table.

And taking it to the next level.

And lots of blue-sky thinking.

There are no problems, just challenges (he obviously hasn’t met Alan Gillespie in year nine).

If you aren’t on board, you’re overboard, so you’d better learn to swim (he seemed very pleased with this one).

A school is like a pie and you’re just a piece of the pie and the pupils are the filling and the building is the crust and the Headmaster is – he trailed off at this point – I don’t think he’d really thought the pie analogy through properly.

I have three more training sessions left. I’m dreading them already. As we were heading out of the door, Colin gave us all homework, although in line with current education trends, he explained that we didn’t have to do it if we didn’t want to, but he’d appreciate it if we did – and therein lies the most accurate management lesson of the day – when you have no power, the only power you have is to beg. 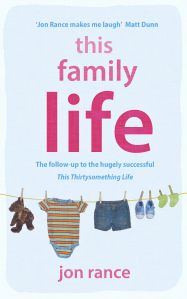 Things that might happen during your first year of parenthood:

2. You’ll be convinced your son is talking with a Japanese accent.

3. You’ll worry that when your son waves, it looks like a Nazi salute.

Taking up where This Thirtysomething Life left off, Harry Spencer and is wife Emily are back and trying to survive their first year of parenthood. It has its ups and downs (and a few bits in the middle), but along the way they begin to understand the true meaning of family and what it takes to be a parent.

Featuring a hilarious cast of extras including Harry’s father-in-law Derek, who has a unique problem with Scotch, Steve and Fiona, the parents from children’s entertainment hell, and a yoga instructor with a prominent camel-toe, This Family Life is the ultimate comedy for anyone who is a parent, has a parent, or is thinking about becoming one.

A HUGE thank you to Jon for appearing on Bookaholic Confessions. If you hurry you can get your Kindle copy for a mere 99p over on Amazon. What are you waiting for? Do it now!