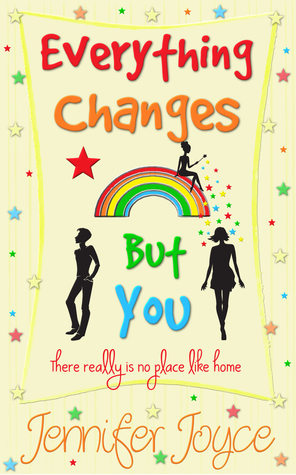 Ally Richmond is dreading turning thirty and bidding farewell to her youth. And when her husband says he wants to start a family, she begins to panic.
Is this all that life has to offer from now on? Popping out babies and growing old gracefully? She wants a life crammed with glamour and spontaneous adventure, not one full of dirty nappies and night feeds.
When Ally makes a silly birthday wish for a new, exciting life, her wish is granted.
But when Ally is presented with the freedom and opportunities she craves, she soon realises this new life isn’t all it’s cracked up to be and that there really is no place like home.

About to turn thirty, Ally is feeling fed-up. She feels her life is missing excitement and adventure and is struggling to put off her husband, Gavin’s, desire to have children. Unsure of whether she’ll ever be ready to start a family with a man who leaves his laundry piled up on the chair, Ally can’t even escape her woes at work, as Kelly, her young and glamorous work colleague is always boasting about her drunken nights out and the raucous parties she frequents. To rub salt into the wound Kelly is also having a not-so-secret affair with their hunky boss, Jason, who Ally quite likes herself. Not that she’d ever do anything about that, she’s married to Gavin after all.

But Ally gets way more than she bargains for when she makes a seemingly innocent wish when blowing out her candles on the thirtieth Birthday. She wishes that she had a life like Kelly’s… After waking up the next day to find herself in a strange house with a huge naked portrait of herself on the wall Ally fears she has been kidnapped. There are photos of her with a strange woman and documents addressed to Ally but in her maiden name. Things get weirder as Ally discovers that an old woman is living in her real house and nobody seems to have heard of her husband, Gavin Richmond. Then deciding that maybe she is really in a coma, and this is all just some weird out of body experience Ally attempts to get on with things as best as she can. At least she does until Clementine shows up. Clementine reveals herself to be a sort of ‘guardian angel’ and explains how Ally wished for her life to be more like Kelly’s…and ta-dahh her wish has been granted. Well, that’s good, right? Ally wanted more fun, excitement and freedom in her life, didn’t she?

Except that it doesn’t exactly work like that. Ally is no longer Ally…she is Alana. Selfish, money-grabbing, shallow, bitchy, image obsessed Alana. Her family are fed up with her, no one trusts her, her best friend Francine doesn’t want anything to do with her, she’s really IS having an affair with her boss, she had debts up to her eyeballs and worst of all…Gavin Richmond doesn’t figure in her life at all. No longer her husband, Alana has no idea where Gavin even lives anymore and soon discovers that she can’t actually live without him…

Rather than having the time of her life as a carefree party girl, Ally finds herself stuck in this weird world where everything had changed and goes about doing her best to put things right and immediately discovers that the grass isn’t always greener…

I was so excited by the sound of Everything Changes But You. I love stories that have an element of magic to them, where something happens to one of the characters and they have to live their lives in some kind of parallel universe until they learn the error of their ways. I always wonder (read, panic) how, or even if, they are going to get back to their original lives and that keeps me hooked on the story until I find out.

Everything Changes But You followed that format perfectly, so needless to say, I loved it! Ally was a fantastic lead character and I completely sympathised with her. Who hasn’t wished that they were someone else at some point in their lives and I think we are all guilty of sometimes taking things for granted. It’s just that none of us actually expect these off-the-cuff wishes to come true in the way that they did for Ally.

I was genuinely scared for Ally when she became Alana…I mean can you imagine? Losing all of the people who you love and not even being aware of what you’ve done. I loved how not only do we get to see Ally as a different person, but also how those around her would have turned out if she’d been Alana. Her parents, her sisters, her husband, even her friends…they would have all been different people if Ally had been someone else and that really sets off a spiral of thoughts.

Everything Changes But You is hugely fun, action packed, brimming with brilliant characters, witty dialogue and has a genuinely heart warming story at the centre of it all.

If you’ve ever enjoyed films such as Big or Freaky Friday then you will LOVE Everything Changes But You, because it’s based on a similar kind of situation. It will make you appreciate what you have and also shows you that not everyone is the person you think they are.

I whizzed through this novel, I couldn’t get enough of Ally’s scary, life-changing adventure and I also fell in love with Jennifer Joyce’s writing. I’m yet to read A Beginners Guide to Salad but I am now even more excited about doing so as I found this novel to be right up my street. Although it may not sound it from the synopsis, I actually found this to be an ultra-romantic story. You want to cry at Ally’s desperation to find Gavin when she’s Alana, and the fact that they can’t be together really does pull at the heart strings. All I wanted was for them to be re-united as plain old Ally and Gavin again and to be back together where they belonged.

There are laughs, tears, romance, adventure and of course, a little magic in this eye-opening, hugely enjoyable novel from Jennifer Joyce.

I would like to say a huge thank you to Jennifer for very kindly sending me a copy of Everything Changes But You to read and review.

I am also delighted to be a part of Jennifer’s blog tour, so look out for a guest post from Jennifer herself on 4th October…

I’m a writer of romantic comedies who lives in Manchester with my husband and our two daughters. When I’m not disappearing into my own fictional worlds, I can be found reviewing books here on the blog or over on Novelicious as part of the Alternative Thursday team. You can read my Novelicious reviews here.

One thought on “Book Review: Everything Changes But You by Jennifer Joyce”