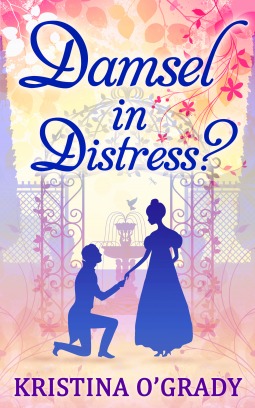 A chance meeting that could scandalise the ton! 19th century England. Harriet is running for her life, chased by three men on horseback through Hyde Park. Knocked unconscious, everything goes black… Philip, Baron Eaglestone, has never seen such a beautiful damsel in distress. And he’s even more intrigued when she opens her eyes, and begins to speak. Because this irresistible woman can only remember her first name, and has no knowledge as to who was trying to kill her… or where she is! As Philip cares for Harriet, their attraction burns… and neither can shake the feeling that their chance meeting was truly a moment out of time. But if her memory returns, Harriet will be faced with a question. Will she return home or could it be that family is where her heart is – with a Regency rake!

Set during the 1800s, Damsel in Distress begins with Harriet being chased on horseback through Hyde Park by three men who seem intent on harming her. It just so happens that Philip (aka Baron Eaglestone) stumbles across poor Harriet being hunted down and steps in, scaring the men off. s come from, who the men on horseback were, or why they seemingly wanted her dead.
Philip rescues this damsel in distress; taking her back to the home he shares with his sister to help her recover from the vicious attack and hopefully to also recover her memory. However, Philip gets a lot more than he bargained for when he finds himself falling for Harriet and she finds herself rather liking him too. Only her presence starts to cause a scandal, with the local gossips having a field day about the mysterious girl living with Philip. This can only be a bad thing for Harriet who is desperately trying to remain hidden from those three mysterious men who are still after her…if only she could just remember why.
I don’t tend to read a lot of time-travel novels because I sometimes struggle to believe in the plot (however that’s probably just me being cynical!) but I was really looking forward to Damsel in Distress, as despite the time travel element it seemed to have an intriguing plot line and sounded like a gripping historical romance, which it definitely was. The mystery was maintained well throughout the story of just who Harriet was and why she was being chased. She was also carrying a mysterious packet at the time which the men seemed to be after and I was desperate to know what was hidden in it!
As much as I was dying to find out where Harriet had come from I did wonder if she wouldn’t be a teeny bit more concerned about waking up from being chased and having no idea about who she was – I know I would be! She just seemed to bit too relaxed about having found herself in this strange position, I would be scared to death but then again I am a bit of a wimp.
One thing I enjoyed about this story is that it was so fast paced and moved quickly, which keeps your attention and is something I always find very satisfying as a reader. However, I did think that the relationship between Harriet and Philip seemed a bit rushed. They fell for each other a bit too quickly and easily in my opinion (I understand that Philip was a very handsome man, but still…!)
Despite these tiny, tiny niggles I did really enjoy this story and found it a unique read, different to anything that I can recall reading before. It’s a book you will find yourself skimming through and I liked how the chapters were short and snappy, keeping my attention exactly where it should be. I’ve also added Kristina’s first novel, Debutantes Don’t Date to my To-Be-Read list as I’m loving the sound of the synopsis and I’m really looking forward to giving that a read.
Although Damsel in Distress is actually the second book in Kristina’s time travel series, this can easily be read and enjoyed as a standalone novel. I also have to mention that gorgeous cover. I love everything about it; the colours, the background, it’s just beautiful and I know it’s bad but I would definitely be willing to give this a read on the cover alone (I know, I know! But just LOOK AT IT!) Carina always produce a good cover in my opinion.
If you’re a fan of historical romance or like books with an element of time travel then this book is made for you. It’s light, warm, mysterious and really enjoyable.

A huge thank you to Leah from Girls Love To Read for organising the Damsel in Distress? Blog Tour and for having me onboard. My thanks also to NetGalley for the review copy. ♥

Kristina O’Grady has always loved telling a good story. She took up writing at a young age and spent many hours (when she should have been doing her math homework) writing romance stories in a book she hid in her sock drawer. She still remembers the first romance book she ever read. She was without anything to read (oh no) while on vacation with her family and bought a book in the small shop in the hotel lobby. It involved an Earl, a horse and very bad fever and of course, a Lady. Since then she has been hooked on the Regency era. Kristina grew up on a cattle ranch in Western Canada and although has been told many times she should be writing about cowboys, she can’t seem to leave the fantasy of Dukes and Earls alone. She worked in the Oil and Gas Industry for several years first as a laborer, machine operator, crew foreman, technician and eventually as an environmental consultant. She loves getting out in the fresh air and enjoying the peace of nature. In mid 2000 Kristina met her own knight in shining armor/cowboy who swept her off her feet and across the world to New Zealand, where she now lives on a sheep and beef farm with her amazingly supportive husband, three gorgeous young kids, seven working dogs and one very needy cat. ♥ Kristina O’Grady ♥  | Website | Facebook  | Twitter  | Goodreads |