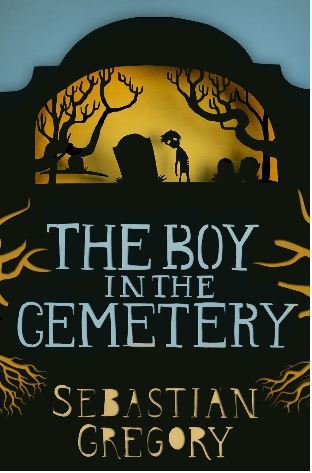 Carrie Anne is desperately unhappy. Tangled in a web of abuse, she seeks solace in the cemetery that backs onto her garden. But something creeps between the gravestones. Carrie Anne is not alone…

…and a boy who was dead, but could not die.

The cemetery is home to a boy. He has guarded these forgotten bones since meeting a gruesome end two hundred years ago. Neither dead nor alive, he has been watching for a long time. And now, he finally has the visitor he’s been waiting for…

The Boy in The Cemetery begins in Victorian England where we first meet ‘The Boy’, a poor child who is living in squalor and poverty with a mother who he loves very dearly and a father who he very much doesn’t.
Life is already pretty bleak for The Boy and when his mother contracts The Consumption and dies; he is left living with just his drunk, violent father. It was the norm back then for young boys to be sent to sweep chimneys, but so many of them never made it back out of the chimney’s alive and The Boy fears that this is the fate that awaits him. But then a chain of events involving the local cemetery bring about drastic changes for The Boy and ‘life’ as he knows it.
Meanwhile, in the present day, we meet twelve year old Carrie Anne. Although, unlike The Boy, she may not be living in poverty, she is living with a monster of a father, a father who has snatched her innocence away and caused her to not want to be in this world anymore. Circumstances lead to Carrie Anne and her parents moving away to start a new life where their secrets can remain secrets. It just so happens that the house where they plan to start afresh backs on an old abandoned cemetery….The very same old abandoned cemetery where The Boy’s life changed all those years ago. It’s surely only a matter of time until the worlds of the dead and the living collide, leading to shocking, spooky and very dark consequences…

The Boy in The Cemetery is a novel I have been hugely looking forward to reading. It’s a million and one miles away from my usual genre, it doesn’t have a sparkly cover and you couldn’t exactly class it as a romance. However, I do like the idea of a spooky read and I was mega intrigued by this novel. Plus, the cover is amazing and it kind of hypnotised me, I could just stare at it all day. There is something magically creepy and intriguing about it that I can’t quite put my finger on.
I was expecting The Boy in The Cemetery to be a funny, light hearted take on a spooky novel…but I was seriously mistaken. This is one very creepy, sad, dark and eye opening tale. Needless to say, I thoroughly enjoyed it.
Sebastian Gregory’s writing is so out of this world it could be classed as paranormal in itself. It’s perfectly descriptive and even the most cynical of imaginations will have no difficulty envisaging the cemetery, The Boy, Carrie Anne’s distress, the darkness, the rats, the spiders…everything comes to life in a scarily realistic way. Sebastian’s writing is also brilliant at evoking emotions in you; your heart will go out to Carrie Anne and The Boy and you’ll feel such a strong hatred for Carrie Anne’s parents.
This book is like nothing  I’ve read in a very long time and it brought back so many memories of reading as a child, as although in no way is this a children’s book, most adult books just don’t have this level of imagination. As far as I was concerned everything in this book was real.
I am a massive fan of Tim Burton’s animated films, especially The Nightmare before Christmas and The Corpse Bride and The Boy in The Cemetery reminded me so, so much of these films. It was literally like reading a novel version of these films, only with a darker, grown-up twist.
I found the storyline to be immensely gripping, I was so desperate to find out what was going to happen that I found myself racing through this book at an unusually fast pace, as the story of these two damaged, poorly treated young people unfolds. I found the ending to be extremely good too. It just felt ‘right’ and made for a brilliantly fitting end to the story and even leaves the door open for a possible sequel.

If you’re looking to read something a bit different or something a bit creepy for Halloween this Friday, then you’ve found your book with The Boy in the Cemetery. Open up your imagination and be prepared to squirm just a little….

Many thanks to Sebastian Gregory, Carina and NetGalley.