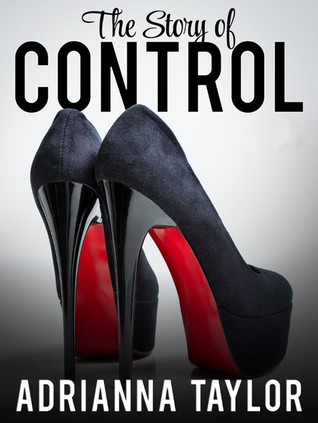 The Story of Control is not fiction. It is fact, and recounts the true story of a modern woman in an unorthodox world.

But even in such contemporary love stories there is strife. Romance and sex do not enter into Adrianna’s Mistress Hallie persona, but the adult age play and the sexual domination she provides can have a more lasting impact than she would like. With her gender fluid boyfriend on one hand and her self-made business on the other, will she cope?

The Story of Control is described as being ‘the real life 50 Shades of Grey’. I’ve not actually read 50 Shades of Grey so I couldn’t possibly comment on how the two compare, but I assume that if you enjoyed 50 Shades of Grey then you’re bound to enjoy this.
Adrianna’s real life experiences are VERY real indeed and they certainly don’t hold back, so be warned (it gets very detailed at some points) but after all, this is a real life memoir so I guess that’s to be expected. There were points in this book where I was cringing and literally reading the story through my fingers; it will shock you, make you laugh, make you think that people are downright strange and also make you wonder what really goes on behind closed doors. How well do we know anyone? It’s quite scary when you think about it!
Despite all of Adrianna’s (or should that be Hallie’s…) experiences working as a Dominatrix, The Story of Control is ultimately about one girl trying to navigate life and overcoming the hurdles that she faces. Living a double life is no easy task but I loved how we get to see both sides of Adrianna through her work and her normal day-to-day life.  She comes across as really likeable and makes for a great narrator. Boy, has she had some experiences…
I found The Story of Control to be a really fascinating insight into Adrianna’s world. Whilst it’s not necessarily the kind of book I would usually go for, sometimes it’s good to give something different a read and I’m glad I did in this case.  Despite there being one or two parts that made me sit up and think how weird people are and the graphic detail of some scenes (although that’s to be expected) The Story Of Control was like snooping at someone’s personal (and hugely fascinating) diary and being such a nosey person I loved that aspect of it. If you’ve ever read The Secret Diary of a Call Girl then I think you’ll enjoy this as it’s very similar. Shocking, fascinating, scandalous, and extremely honest, The Story of Control shoes what life is like for an ordinary girl with an extraordinary job…

A huge thank you to Kate from Authoright for supplying me with a copy of The Story of Control to read and review. ♥

2 thoughts on “Book Review: The Story of Control by Adrianna Taylor”