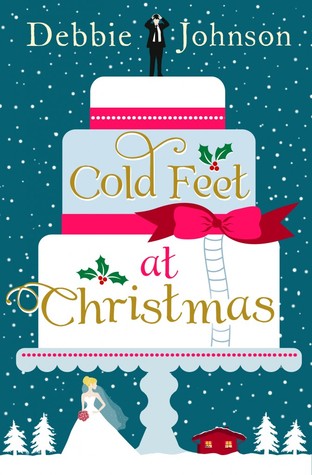 Running out on your wedding shouldn’t be this much fun!
A remote Scottish castle on a snowy Christmas Eve. A handsome husband-to-be. A dress to die for. It should have been the happiest day of Leah Harvey’s life – but the fairytale wedding turns sour when she finds her fiancé halfway up the bridesmaid’s skirt just hours before the ceremony!
Fleeing the scene in a blizzard, Leah ends up stranded at the nearest cottage, where she collapses into the arms of its inhabitant – a man so handsome she thinks she must have died and gone to heaven!
And when Rob Cavelli suddenly finds himself with an armful of soaking wet, freezing cold, and absolutely gorgeous bride on the run, he’s more than happy to welcome her into his snowbound cottage this Christmas…

Lead characters Rob and Leah are thrown together under pretty exceptional circumstances. Leah has just discovered her fiancé playing ‘hide the sausage’ with one of her bridesmaids right before she says ‘I do’. She flees, still in her wedding dress in an attempt to get as far away from her (now ex) fiancé, Doug, as she can. However, disaster strikes when her car breaks down in the remote Scottish highlands. She is faced with either dying of hypothermia or asking for help from the inhabitants of the nearest cottage, who could well be mass murderers, but it’s a chance Leah (still in her wedding dress) is willing to take.
Currently staying in this mysterious looking cottage is American business man, Rob, who spends every Christmas locked away in the remote cottage in a attempt to forget about the death of his wife, Meredith and their unborn baby, for which he blames himself.
He takes in the bedraggled, on-the-verge of freezing, bride to be and as soon as Leah starts to recover from her ordeal it’s clear that there is a huge attraction between the two. The inevitable happens and Rob and Leah soon end up in each other’s arms; two lost souls struggling to overcome the tragedies of their past.
However, things aren’t that simple. Rob makes it perfectly clear that he doesn’t want a relationship. He believes that he doesn’t deserve happiness after everything that’s happened, and whilst he is all for having a bit of festive fun with Leah he in no way wants things to continue after Christmas. Leah feels pretty much the same, or at least she thinks she does. After all, she’s just left her fiancé and has no idea what she is going to do with her life now her relationship is in tatters.
Rob unexpectedly asks Leah to move out to Chicago and start a new life there. There’s nothing for her in England anymore and he believes with his connections he could give her a head start with starting up her own catering company. Leah agrees and it’s decided that the pair would be just friends out in America and put their Christmas love-fest firmly behind them. Sounds reasonable, right? Think again…

I was instantly drawn to Cold Feet at Christmas, I mean just LOOK at that cover. It’s beautiful and easily one of my favourite Christmas novel covers this year. I would probably have read this based on that gorgeous cover alone (don’t tell anyone…shhh).
However, the synopsis sounded pretty great too so I had really high expectations for this novel, despite never having read of any of Debbie Johnson’s novels before.
First and foremost I loved Debbie’s style of writing. It was sharp, realistic and really, really funny. I immediately warmed to Leah and despite wanting to give Rob a flipping good shake at times, I liked (read: fancied) him too. You can’t blame me; Debbie paints a pretty gorgeous picture of Rob and his twin brother, Marco…
I will admit that Leah seemed to take finding her fiancé cheating on her in her stride a bit too well. I get that she and Doug didn’t have a fantastic relationship, which she comes to realise, but I can’t help but feel that she would have been more upset about what had happened. Although saying that, anyone would probably forget about such an occurrence if they stumbled across a secluded cottage and the gorgeous Rob.
I love the way that the chemistry is portrayed between Rob and Leah. It is smokin’ hot, and makes for an un-put-down-able read. You just know that these two should be together, but that pesky Rob just won’t admit it. GRRR. I really enjoyed reading about these two characters though, and the games that they play. Their relationship is both funny and frustrating but makes for an addictive read.
I really liked the ending and found it to be extremely satisfying, if a little sudden. Still, it left me grinning like a loon and feeling all warm and fluffy.
The only other things I should mention are that this book is ALOT steamier than I anticipated. I mean…wow. Also if you’re looking for a Christmassy read then be warned that the story only starts off at Christmas, as it quite quickly moves on, so it’s not as much of a Christmas-fest of a story that the cover might suggest but that in no way detracts from it being a very pleasing, exciting read. I’m really looking forward to reading some more of Debbie Johnson’s books as this was extremely well written and made for one lovely, unpredictable romance.

As part of my Christmas Corner, I will be rating each Christmas book I read on just how Christmassy they are. This of course, does in no way impact on how brilliant the story is, it’s literally just how must of a Christmas-fest the story is…

My Chirstmas Rating for Cold Feet at Christmas is:

The start of Cold Feet at Christmas is VERY Christmassy indeed, but normal life soon continues (sadly! If only it could have just stayed Christmas forever with Rob and Leah stranded toegther in that cottage…) Just because there is a lack of tinsel and turkey throughout the rest of the story doesn’t make it any less fabulous, however, it’s still great. Plus the cover has to be one of my favourites, it’s gorgeous and even though the story is not mega Christmassy the cover definitely is!

A very big thank you to HarperImpulse for approving me to read this title on Netgalley. ♥

Debbie Johnson lives and works in Liverpool, where she divides her time between writing, caring for a small tribe of children and animals, and not doing the housework.She writes romance, fantasy and crime – which is as confusing as it sounds!