MUCH EXCITEMENT! Today I am joined by the incredibly lovely Vanessa Stevenson, whose debut novel, A Hopeaholic’s Halleujah, is absolutely brilliant (check back later today for my review & click here to get your copy) I’ve been quizzing Vanessa about multi-tasking, 5 star reviews and Harry Potter…

Hello Vanessa, a huge, warm welcome to Bookaholic Confessions! Thank you so much for participating in this interview. Would you like to start by introducing yourself…?

Thank you so much for having me. What a privilege! I love your blog, so it’s an honour to be invited onto it. Well, I guess I’m a bit of a bohemian. I’m an actress (mostly indie films) and singer, and, only because I can’t help myself, a writer of screenplays, songs and to-do lists. I’m also a wife and a real-life hopeaholic. And I occasionally do voice-overs. (Mostly for ridiculously fun characters like a singing pot or a crazy tomato.) You know, just your average Jill.

With pleasure! A Hopeaholic’s Hallelujah is a suspenseful Rom-Com based on a sensational True Story… The truth of it is, desperate circumstances (an ailing relationship, a mountain of debt and a flailing career) compelled me to answer a dodgy ad for hotel singers in Cyprus. It was an audacious gamble on my part, not only due to the dangers of accepting work with unregulated companies abroad but also because I suffered with show-stopping stage fright. Nevertheless, I boldly (crazily) accepted the short-term contract and set off for Paphos. Only once I arrived on the island did I realise the terrible mistake I’d made. But with no money to get back to England, I had to stick it out… Out of this came the story for the novel.  Having only written film/TV scripts and plays before this, I was daunted by the idea of writing a book. It’s quite a bit longer. But it would not leave me alone; the story had to be told. So I wrote it. And then I edited it about 153 times before I allowed anyone to see it. Perfectionist – moi?

Is your lead character, Jessica Hollingberry, in any way based on yourself or anyone you know in real life?

Oh my goodness, no. Of course not…

Alright, alright, you’ve got me! She’s me, OK? A rose-tinted, slightly hyperbolised version of me. 😉

You’ve got some fantastic 5-star reviews for your novel and have even been compared to Sophie Kinsella; what does it feel like as a new author to read those comments?

Overwhelmed. With gratitude, and disbelief. And more gratitude. I LOVE Sophie Kinsella, so to have my name in the same sentence as hers – in a positive way – is a dream come true. I just hope, if she ever reads this, she doesn’t mind. I mean, she’s written a million books (well, close to, anyway), and I’ve only completed one so far. The challenge for me now is to complete the next book. It’s daunting, I can tell you.

Gosh. In a nutshell – trying. But as someone once said: ‘The difference between Try & Triumph is just a little Umph!’  Well, it took a lot of ‘umph’. And tears, and laughs, and long, hard nights of graft (and a ton of coffee and vino). I actually sent the first three chapters of an early version of A Hopeaholic’s Hallelujah to a few agents – under the original title: Thank You for not Dancing. But nobody bit. (And I’m glad, actually, because it’s so different now to that version. Although, I do wonder: If I’d told them it was based on a true story, might things have turned out differently?) I did, however, receive some fabulous comments and encouragement from a couple of the agents, particularly Sophie Kinsella’s agent, Araminta Whitley. She took the time to write me a letter of praise – can you believe that? I was so grateful. I stuck it on my fridge and that kept me going through every hour, day, week, month of rewriting, editing, formatting, etc… I owe her a great deal and I’ve mentioned her in my Acknowledgements. Next time I’m in London, I’ll be taking her a copy of my book – just to say Thank You. Anyway, after much encouragement from my husband and family and friends, not to mention a lot of research and many meetings with another writer friend, I decided self-publishing was the best route. So here I am.

As well as being a fabulous author you are also an actress, singer, producer, song writer and screenplay writer. WOW! How do you juggle everything!?

Thank you! Haha – not terribly well! I’m not a multitasker. I take my hat off to people who have jobs and run a household and have children and still find the time to successfully pursue their dreams. How do they do it? I’m in awe… The secret is a well-organised diary (I love to plan!), and discipline (which I lack, but I’m working on it, especially with regard to how I spend my time). I’m constantly feeling like I won’t be able to accomplish everything I want to do before I die. But it’s important to me that I do; I want to be ‘empty’ when it’s my time to leave this earth. I want to feel like I’ve changed the world in some significant way, or at least people’s perceptions, or whatever. Trouble is, I’m a ridiculous perfectionist – it’s a terrible weakness – and I battle with OCD. Not in a challenging, life-altering way – just in my work. So everything takes longer, because I’m constantly checking and re-checking. It can be exhausting. But I just don’t like giving anything less than my best. But the main reason I can get away with so many ‘hats’ is: I’m still completely unknown. My time is my own, and I can go where inspiration leads. (As you can see, I look for the positive in everything!)

This question is nothing to do with writing, so please forgive me, BUT… what was it like being Suzie Toase’s double in Harry Potter and the Deathly Harrows? I just have to ask…

Haha! Serves me right for mentioning it in my ‘Quirky Facts’ paragraph on Amazon! It was fun. Suzie is a lovely person and a fab actress. I didn’t really get to spend a lot of time with her; mostly I just went through the scene with the director, so they could check lighting and camera angles, and then I was dismissed and Suzie came in and did her thing. I did have a little ‘moment’ with Daniel Radcliffe, though, who stepped over me when I was lying ‘dead’ on the stage and asked me if I was having a good sleep. And in my next book I’ll reveal a couple of embarrassing (for me) encounters with Helena Bonham Carter and Sir Alan Rickman on set… 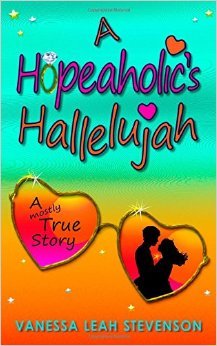 This is the difficult part. I always like to plan at least a month ahead. But the moment I put it all down in my diary, something happens and there goes that plan! At the moment I have the following on my plate: acting roles in 2 independent feature films (one in the UK – my first lead role in a feature! – and one overseas); 3 novels in the pipeline (one of these is the second Hopeaholic book, which I’m aiming to publish by Christmas 2015); and 4 film scripts on the boil. And somewhere in the middle of all this I need to find time to market A Hopeaholic’s Hallelujah. (I’m really, really bad at the marketing side of things.)

Thank you so much for participating in the interview, Vanessa, it’s greatly appreciated and I’m delighted to have you on my blog!

Holly, the pleasure is mine! Thank you! J