Welcome to a very special Festive Feature on my blog, where every day up until Christmas some of my favourite authors will be sharing what they love most about the festive season, including their favourite films, food, music, presents, memories, books…Plus much more…

With just over a week to go until Christmas, I’m delighted to welcome the super-fantastic Kerry Fisher to my blog…

My favourite thing about Christmas…no presents at all!

I’m a little strange in the fact that I don’t like presents, which doesn’t make me your go-to gal for Christmas morning jollity. And that’s not in a ‘I don’t like presents, don’t get me anything’ way, while secretly hoping for a fancy handbag made out of camel eyelashes or a body lotion with rare nectar collected from Egyptian bees. I actually have a horrible backing away feeling when people give me a gift, some weird present-induced anxiety.

I’ve tried to pin this down. I think it’s because I find it very hard to lie but hate to appear ungrateful when people have expended effort, time and money. So, for example, when I was handed a bright red Austrian goat herdy jacket that practically burst out of the paper yodelling and ringing cowbells, I was desperate not to offend my lovely relative who ‘saw it and thought of me’. Cue face-rearranging of Olympic proportions. The pressure to like something makes me want to hide in the pantry while the daughter unwraps it and tells me if it’s OK.

Also, I have hippyish/studenty tastes that most people appear to think I should have grown out of by now. I still love bright colours and clothes my mother would describe as ‘way out’. The gap between who people think I am (leather gloves, clutch bags and delicate gold chains) and how I see myself (all tie-dye and wooden beads) appears to grow ever wider. Maybe I’ve missed my moment for backpacking in Nepal, but I’d like to think that the girl who took off to the Thai jungle on her own could still manage a bit more than afternoon tea in a hotel with a doorman to help me up the stairs.

Another element in the mix is that you could never describe our house as clutter-free. The daughter loves all manner of rat-a-tat-tat. Witty signs to hang in the kitchen, pottery dogs for the mantelpiece, pictures to brighten up this, that and the other neglected corner. The husband clings onto hacking jackets that pre-date me, old trainers ‘just in case’, single cufflinks that might be reunited with the elusive partner. To avoid starring in The Hoarder Next Door, I feel obliged to streamline my own requirements, adhering to a ‘one thing in, one thing out’ policy.

My poor husband gets exasperated because he hates looking like Scrooge on Christmas Day, dreading anyone asking me ‘And what did Steve buy you?’ Happily, we’ve reached a compromise. Practical things can be granted houseroom. Last year a fridge. The year before, a wonderful Le Creuset casserole. One memorable year, a clutch for the car. This year, a new airing cupboard. I can’t wait!

A very big (and practical!) thank you to Kerry for contributing this brilliant piece. ♥ 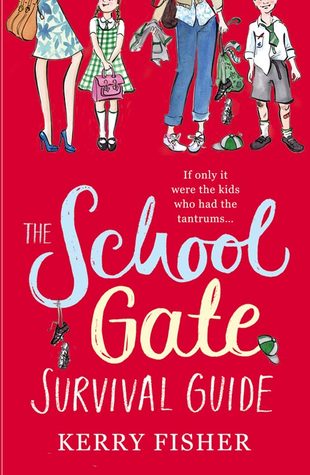 Born in Peterborough, Kerry Fisher studied French and Italian at Bath University, followed by several years working as an English teacher in Corsica and Spain before topping the dizzying heights of holiday rep and grape picker in Tuscany. She eventually succumbed to ‘getting a proper job’ and returned to England to study Periodical Journalism at City University. After two years working in the features department at Essentials magazine in London, love carried her off to the wilds of the West Pennine moors near Bolton. She now lives in Surrey with her husband (of whisking off to Bolton fame), teenage son, 12-year-old daughter and a very naughty lab/schnauzer called Poppy. Kerry can often be seen trailing across the Surrey Hills whistling and waving pieces of chicken while the dog practises her ‘talk to the tail’.

Kerry has spent half her life talking about writing a novel, then several years at Candis magazine reviewing other people’s but it wasn’t until she took some online courses with the UCLA (University of California) that the dream started to morph into reality, culminating in the publishing of The Class Ceiling. The Avon imprint of HarperCollins picked it up and retitled it The School Gate Survival Guide published summer 2014. Her next book, The Divorce Domino, will be published in summer 2015. It won first prize at the York Festival of Writing for the opening line: ‘I was wearing the wrong bra for sitting in a police cell’.