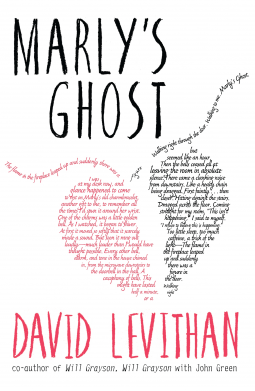 When Ben’s girlfriend, Marly, dies, he feels his life is over and the prospect of Valentine’s day without her fills him with bitterness. But then Marly arrives – or at least, her ghost does – along with three other spirits. Now Ben must take a journey through Valentines past, present and future – and what he learns will change him forever.

Marly’s Ghost by David Levithan basically does what it says on the tin; it’s a modern-day remix of the classic Charles Dickens novel, A Christmas Carol.
Teenager Ben (full name Ebenezer) has virtually given up on life after the death of his beloved girlfriend, Marly. With the prospect of Valentine’s Day on the horizon, it’s fair to say that Ben is being a complete scrooge about the up-and-coming February 14th. He mocks those who are in love and pushes his friends and those nearest to him away.
However things look set to change when Marly’s spirit visits Ben the night before Valentine’s Day with an important message.  He is to be visited by three further spirits that night – the spirits of Love Past, Present and Future, who will show him the error of his ways and how his life is destined to turn out unless he re-opens his heart.

I was really excited about reading Marly’s Ghost. I love A Christmas Carol and this is the first proper David Levithan book I’ve had the chance to read. I was also really excited to see how this would play out. On the whole I thought it was a great idea, swapping Christmas for Valentine’s Day made for a great plot and other changes such as Tiny Tim becoming two men who are actually in a relationship together brought something different to the story too.
The rest of the story is pretty much kept to the original as much as possible, which I thought was both great and at times, a little strange. For example, to start off with I was under the impression this was a modern day story set in America and the characters were modern day teenagers – but by the end of the story Ben is talking in Victorian English and I had to question which time period we were in and in fact, which country.
Aside from minor details such as that I found this to be a really enjoyable take on a well-loved classic. David Levithan is clearly a very talented writer; my heart was breaking for Ben and Marly and I felt as though he really brought their relationship, and therefore their heartbreak, to life. I also like the fact that the central topic of this whole story is love – it literally oozes out from the pages and I really enjoyed the way that Levithan writes. Ben and Marly’s earlier relationship was such a joy to read about. It’s really made me want to try out some of his other novels.
Whilst this is only a very short story, I personally would like to read a whole, standalone novel about Ben and Marly. I want to read about their friendship, their relationship, how they met, how they battled Marly’s cancer together and eventually, how Ben learns to live his life without Marly by his side. Whilst you do get snippets of their past as a couple, I did feel that the story was just too restrained by having to be so similar to A Christmas Carol, but I suppose that’s the whole point…

I’ve had a peek inside this book on Amazon as the copy I read was from NetGalley and I really like the look of the paperback with the illustrations (which are done by Brian Selznick) and the cover for both the paperback and the Kindle edition are beautiful.

If you’re a David Levithan fan then this is a must for you. If you were expecting anything to do with Christmas then don’t let the fact that it’s based on A Christmas Carol fool you, as it’s firmly all about Valentine ’s Day but still worth a read. All in all, an interesting, heart-wrenching adaption of a classic tale.

A huge thank you to publisher Electric Monkey for approving me on NetGalley to read and review Marly’s Ghost. ♥

David Levithan won the Lambda Literary Award for his debut novel Boy Meets Boy, but is probably best known for his collaborations with John Green (Will Grayson, Will Grayson) and Rachel Cohn (Nick and Norah’s Infinite Playlist, which was also made into a movie).

As well as being a New York Times best-selling author, David is also a highly respected children’s book editor, whose list includes many luminaries of children’s literature, including Garth Nix, Libba Bray and Suzanne Collins. He lives and works in New York.