I’m thrilled to have been given the opportunity to chat with debut author, Sarah Vincent. Sarah’s novel, The Testament of Vida Tremayne, is one I am really looking forward to reading this year. (You can get hold of your copy here which is currently on a Kindle Countdown deal for 99p!) In the meantime let’s get to find out a little more about Sarah, as she talks keeping journals, where she finds her writing inspiration and tells us about her journey to publication…

Hello Sarah, welcome to Bookaholic Confessions! Thank you so much for participating in this interview. Would you like to start by introducing yourself…?

I live in a small village in the South Shropshire hills with my husband and terrier bitch, Beryl and write in a converted coal-shed at the back of the house. Over the years I’ve had numerous Day Jobs, including a disastrous stint as a Tourist Information Assistant: it doesn’t help if you can’t read train timetables! My very first novel was entitled ‘Curious Connie and Fanny Fanakapan’, self-published at the tender age of seven and beautifully bound with red knitting wool. Since then I’ve upped my game a bit. Writing under my own name, I’ve published three Y/A novels and many short stories over the years. Sarah Vincent is a pseudonym as the ‘Testament of Vida Tremayne’ is a change of genre for me. For the past decade or so, I’ve also worked as an editor for two leading UK consultancies: Cornerstones and Writers’ Workshop.

Can you tell us a bit about your novel, The Testament of Vida Tremayne (released 2nd November 2014)?

Novelist Vida Tremayne was once feted for her prize-winning novel ‘The Gingerbread House’. Since then she’s been deserted both by fame and her husband, Jonathan. Vida now lies silent in hospital after an apparent breakdown. The forces which brought about her decline are shrouded in mystery.

The story opens with Vida’s estranged daughter, stressed-out estate agent Dory, arriving at her mother’s remote cottage on the Welsh borders to take care of things. Dory isn’t at all happy at having to abandon her business back in London. When she finds her mother’s friend, the mysterious Rhiannon Townsend in residence at the cottage, she thinks her luck may be in after all. Rhiannon is only too happy to take care of the bedside watch, so Dory can resume her life.

But is Rhiannon to be trusted or does she have a sinister agenda of her own? Dory’s discovery of Vida’s journals, a testament which charts her terrifying decline changes everything.

This is a story about loneliness, a mother-daughter relationship and the dark side of creativity itself.

I’m fascinated by the synopsis for The Testament of Vida Tremayne, it sounds gripping, mysterious anda real page-turner of a novel. What gave you the idea for this storyline?

I’m not one of those writers who wakes up in the morning with a neatly packaged idea to run with. I wish I was! This novel began more as an itch, a voice that demanded to be heard. My initial theme was creativity; might that be affected by a woman’s menstrual cycle? Does the urge to create dry up with age? And what happens when the writer looks away from the screen and finds that the people she loves have gone, that she is truly alone?

The novel came gradually in fragments. It began as entries from Vida’s Diary. I had no idea that either the fan, or the daughter were going to show up. They just arrived uninvited. This is the way I work. I would hate to know everything beforehand. Recently I came across the quote – I don’t know what I’m writing until I’ve written it – that’s exactly how it is for me. 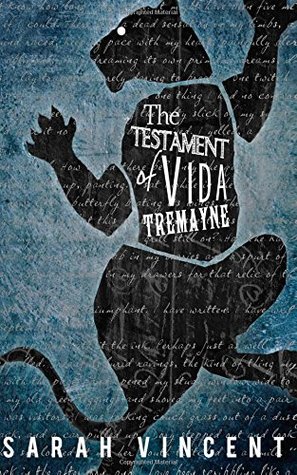 Is Vida a completely fictional character or is she based on yourself or anyone in real life?

It would be pointless to deny the autobiographical element. The novel took form some years ago, when I was going through a rocky time with my writing. There were things I wanted to say not just about the creative process, but about the crazier side of the publishing industry. The only other thing I share with Vida is her affinity with the surrounding landscape. Nature is a powerful and mysterious force, and I’m fascinated by how human beings interact with it. The rest is complete fiction!

In the novel, Vida’s daughter, Dory, discovers her mother’s secret journal, revealing some terrifying secrets. What made you decide that Vida’s story would mainly be in diary form and how did you find writing a novel in that format?

The diary extracts came first, as I’ve said. They seemed a natural way into Vida’s voice, so it wasn’t a conscious decision. After all, Vida has been living in isolation until her fan, Rhiannon turns up. Her journals take the place of a friend, they are therapeutic, and an outlet for her angst. Once Dory came on the scene, I enjoyed alternating the two narrative structures: Dory’s present day third person story, and the more intimate, revealing sections of Vida’s journal.

Do you keep a journal yourself?

I kept a diary for around fifteen years, which included the time I was writing the novel. The entries mainly focussed on my writing life, and I found it helpful to keep a track of my progress or lack of it. I dropped the habit around two years ago, when life just became too busy to scribble away in the evenings. The downside is that I now have about thirty volumes stacked under my desk, which I have no idea what to do with!

What was the best thing about writing a psychological thriller?

Again, I didn’t set out to write a thriller. That said, I’m constantly aware of the reader as an invisible presence at my shoulder. There needs to be a natural dynamic, an energy driving the narrative forwards. Without that you lose your reader. If we ask people to give up precious hours of their time to read our books, we have a duty, I feel, not to bore them. Also, if I’m not excited and driven on to write the next scene, I can hardly expect the reader to stay with me. So yes, I suppose the psychological thriller evolved in an automatic, unconscious way.

Where to begin? I’d had some success with short stories, which were widely published and broadcast on radio in the nineties. In the early noughties, I was lucky enough to have three Y/A novels published by a mainstream publisher. This was under my own name. But sales didn’t quite live up to expectation and for the next ten years I concentrated on editing. During that period I was writing bits of ‘Testament’, but when I finished I lost all confidence and stuck the manuscript in a box file. Then a couple of years ago when we converted the coal-shed into an office, I re-discovered it covered in dust and cobwebs! I decided to re-write, and was lucky to have expert editorial input from Kathryn Price at Cornerstones. Within the year I had signed with a new agent, the brilliant Nelle Andrew at PFD. It wasn’t plain sailing from that point. It turned out that the subject matter was considered a bit too quirky for the mainstream. Fortunately for me, Yasmin Standen at the newly formed independent Three Hares Publishing then read it, loved it and was kind enough to take a chance on me.

Sarah Waters rarely disappoints, and I particularly loved her ghost story ‘The Little Stranger’. I also love the sadly neglected (until recently) Barbara Comyns, for her quirky, off-the-wall, tragi-comic tales, of which ‘Our Spoons Came from Woolworths and The Vet’s Daughter’ are favourites, and Elizabeth Taylor for her exquisite prose and beautifully structured novels, such as Mrs.Palfrey at the Claremont. Taylor has been dubbed ‘the writer’s writer’ and I think that’s true.

Unreliable narrators and cuckoo-in-the-nest stories are always compelling. One novel which combines both to brilliant effect is ‘Gillespie and I’ by Jane Harris, a novel I wanted to re-read the moment I turned the last page.

Of the big reads of the year Donna Tartt’s ‘The Goldfinch’, took my breath away. It really is a work of art.

It’s another psychological thriller, but in an urban setting this time. That’s all I can reveal I’m afraid. If you talk it beforehand, you don’t write it!

A huge thank you to Sarah for participating in this interview. Don’t forget to buy your copy of The Testament of Vida Tremayne in paperback or eBook format.