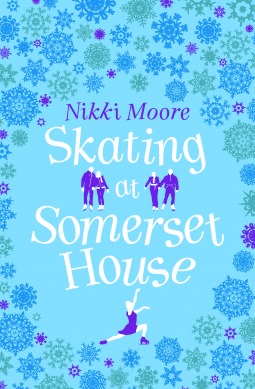 There’s nothing Holly Winterlake loves more than Christmas and skating, so working as an Ice Marshall at London’s Somerset House is a dream come true. Noel Summerford hates the festive season and is a disaster on the ice, so taking his godson to Somerset House is his idea of the nightmare before Christmas! Things are bound to get interesting when these two collide… With a forty foot Christmas tree, an assortment of well meaning friends and relatives, and a mad chocolate Labrador, will this festive season be one to remember … or forget?

In Skating at Somerset House we meet Christmas loving ice-skater, Holly Winterlake, and Anti-Christmas, hide-in-a-man cave-throughout-December, Noel Summerford. The two couldn’t be more different. Holly is a sunny, positive person who looks on the bright side, whereas Noel is a worrier, downcast and a total Scrooge-alike. When Noel takes his godson, Jasper, ice-skating to the ice rink at Somerset House, he gets way more than he bargained for when Jasper takes a shine to Ice Marshal, Holly. (He also discovers he can’t skate for toffee, but we’ll gloss over that…) Holly certainly knows what she’s doing in the skating department as she used to be a professional figure skater until an injury to her knee put an end to her plans. She’s very impressed with Jasper’s skating skills (not so much with Noels…) and it’s not long before the pair are introduced and gradually getting to know one another. They might say that opposites attract and all that; but nothing is likely to happen between Holly and Noel. Both have been burnt by events in their past and are certainly NOT on the lookout for a romance to complicate things. Also, these two are off-the-spectrum-opposites. There’s no way that Christmas-hating Noel and Christmas-loving Holly could ever have anything in common. Is there?

For some inexplicable reason this is the first novel by Nikki Moore that I’ve read. I have been hearing such good things about Skating at Somerset House and was attracted by the cover right from the off. It’s beautiful, festive and gorgeous; just like the story. Skating at Somerset House is only a short story as it’s the first in Nikki’s #LoveLondon series but Nikki achieves something which I always imagine to be very difficult with writing novellas…she manages to fully form her characters and bring them completely to life. In the space of this 40 page novel you will easily warm to Noel and Holly, find out a little about their backgrounds, grow to love them and also desperately want them to be together (which you strongly suspect they will be, but you never quite know. They are so different after all!) Nikki also really brought the beautiful setting alive for me with her writing. The Fortnum and Mason Christmas tree, the magic in the air, the stifling, restrictive attire that people opt for when they go ice-skating…It was all in there. As Christmassy-themed settings go you can’t get much more festive than this, it was perfect. I adored Holly (and not just because of her fabulous name, either!) I love Christmas too and can completely relate to how excited she was getting at the prospect of the festive season. Her family (including her Labrador) were funny, friendly and fantastic too. I also liked Noel (even is he isn’t a fan of Christmas…no one’s perfect, eh?) He had good reason to feel the way he did about the festive season and I just wanted to pick him up and give him a big old hug. I was rooting for Holly to help bring him out of his Scrooge-like shell all along. I am incredibly excited about reading the next story in the series, New Year at the Ritz (download here) If it follows in the footsteps of Skating at Somerset House then I love it already and I’m really excited to now read more of Nikki Moore’s novels. Just like a jumbo tin of Quality Street, this novel is bright, shiny and super, super sweet. It doesn’t matter that Christmas has now passed because Skating at Somerset House will warm you up and make your January that little bit more colourful…

A huge thank you to publishers, HaperImpulse for approving me to read and review this title on NetGalley. ♥

Nikki Moore lives in beautiful Dorset and writes short stories and pacy, sexy romantic fiction. She’s thrilled to be published by HarperImpulse, the digital first romance imprint of HarperCollins. Be My Valentine, a collection of poignant short stories by Nikki and other HI authors was published on 13 February 2014 and has attracted 4 and 5* ratings on Amazon. On 21 February 2014 her short story ‘A Night to Remember’ was published in digital and print editions of the Mills & Boon / Romantic Novelists Association anthology Truly, Madly, Deeply, edited by Sue Moorcroft. Best-selling authors including Carole Matthews, Katie Fforde and Adele Parks feature. The anthology has attracted 4 and 5* ratings and great reviews and Nikki’s story was picked as one reviewer’s favourite. Her debut novel Crazy, Undercover, Love was released as an ebook in April 2014 with the paperback version following in September. Nikki’s been a finalist in several writing competitions since 2010, including Novelicious Undiscovered 2012. A member of the Romantic Novelists’ Association, she has contributed to their magazine ‘Romance Matters,’ has far too much fun attending the annual conferences and has also chaired a panel and taken part in a workshop at the Festival of Romance.