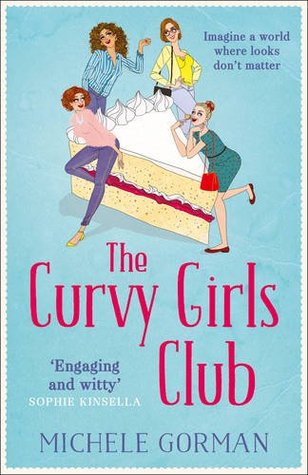 A hilarious, heart-warming read about normal women who decide to ditch the weighing scales and love themselves just the way they are.
Perfect for fans of Sophie Kinsella and Bridesmaids.

Can the curvy girls have their cake and eat it?

Meet best friends Pixie, Ellie, Katie and Jane. Fed up with always struggling to lose weight, they start a social club where size doesn’t matter. Soon it’s the most popular place to be – having fun instead of counting carbs. And the girls suddenly find their lives changing in ways they never imagined.

But outside the club, things aren’t as rosy, as they struggle with the ups and downs of everyday life.

In this funny, heart-warming read about normal women learning to love themselves, the curvy girls soon realise that no matter what life throws at them, together, anything is possible . . .

Pixie, Ellie, Katie and Jane have decided that they have had enough of subjecting themselves to the misery and weekly weigh-ins of being part of Slimming World. The four have all met through the group and want to continue their friendship – but why can’t they do something together that’s more fun than finding out how much weight they (haven’t) lost each week?
The foursome begin to organise events for themselves where they know they’ll have a good time…Think wine-tasting, going to the theatre, dining in the dark (and only at venues with no tiny seats that they’ll have to squeeze those bootylicious bottoms into…)
It’s not long before The Curvy Girls Club is born and starts attracting the attention of many more curvy women out there who are fed up with feeling ostracised by society.
Despite the club starting off with a bang it’s not long before various issues try to derail the four friend’s success as they battle relationship woes, health problems and work difficulties alongside managing The Curvy Girls Club. Can the club, and most importantly, their friendship, survive the difficulties unscathed?

I absolutely adore everything about the message that this novel sends out. I’m all for books like The Curvy Girls Club…y’know, novels that remind us of the importance of love, friendship and happiness over looks.
The Curvy Girls Club does exactly that, and in abundance. It’s feel-good and light hearted, yet scarily realistic. I’m sure every woman who reads this (despite their size and shape) will share some of the thoughts, feelings and insecurities that Pixie, Ellie, Jane and Katie all experience.
I thought that Michele handled the struggles that these women face on a daily basis sensitively and extremely realistically (with an added sprinkle of humour).
Of course this is not a completely fluffy, fun look at four friends putting the world to rights and at times I felt sad at the way these women were treated, especially Katie. Not allowed to visit clients because of her size and the way her work colleague Alex treats her is despicable. As if she is somehow less of a human being because of her size and it’s ok to use her and treat her like dirt!? NO! I was so angry at times I went red in the face (probably!)
The only thing that made me a tiny bit frustrated in the story was how the four friends seemed to change as The Curvy Girls Club became successful, especially Pixie. Ok, I’m not going to lie – Pixie was a total cow at points, especially when Katie started losing weight through a health-related problem. I liked the friendship between Katie and Ellie within the group though and Ellie is a total sweetheart. All four of them seem to lose the plot at some points though; Jane when she starts taking dangerous tablets to lose weight, Ellie convinced her boyfriend’s having an affair and Pixie putting up with her manipulative partner. However, I think these situations go towards proving that these women are ultimately real. They do have horrible bosses, spiteful relationships, bad days and face discrimination in both their private and professional lives.

The Curvy Girls Club is a novel that any chick-lit fan…heck, scrap that…any women will devour. Michele Gorman is a fantastic writer; bringing her characters to life with warmth and humour (the banter that they share is fantastic).
The storyline is exciting, fast-paced and deals with real-life issues in a way that we can all relate to.
All in all The Curvy Girls Club is a fun-filled yet sobering story of how much emphasis we put on looks. If I was Prime Minister I would have this as recommended reading for all women (and men, actually! Maybe it would help if they knew what some women went through…?)
I love the under-lying message and I love this novel. If you’re on a downer pick up this book, not only will it make you feel better but it will also help you to realise that you’re not alone…

A huge thank you to Notting Hill Press and to Avon for sending me a copy of The Curvy Girls Club to read and review. ♥

Michele Gorman is the USA TODAY bestselling author of eight romantic comedies. Born and raised in the US, Michele has lived in London for 16 years. She is very fond of naps, ice cream and Richard Curtis films but objects to spiders and the word “portion”.

You can find out more about Michele by following her on twitter, Facebook and by reading her blog or website. Do chat with her online – she’s always looking for an excuse to procrastinate!