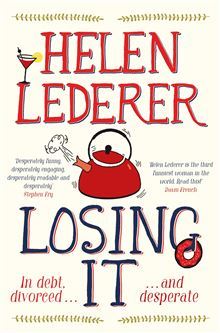 aving such a game keeping up with all of the fantastic new releases in fiction so far this year (and it’s only January! Help!) One of the books due for release in February 2015 has really caught my eye and that is Losing It by Helen Lederer. Helen is a hugely popular comedian, actress and writer who I love (check out her website, she’s brilliant!) Helen describes her book as ‘mid lit’ (following on from chick lit but before grey lit!!) and it promises to be an absolute cracker of a book. I am SO excited about reading it! Check out the synopsis below and get pre-ordering as it’s officially released on the 12th February 2015.

Click to pre-order in paperback or eBook. Published by Pan.

Millie was at one time quite well known for various TV and radio appearances. However, she now has no money, a best friend with a better sex life than her, a daughter in Papua New Guinea and too much weight in places she really doesn’t want it.
When she’s asked to be the front woman for a new diet pill, she naively believes that all her troubles will be solved. She will have money, the weight will be gone, and maybe she’ll get more sex.

If only life was really that easy. It doesn’t take her long to realize it’s going to take more than a diet pill to solve her never-ending woes…

One thought on “What’s New? Losing It by Helen Lederer”