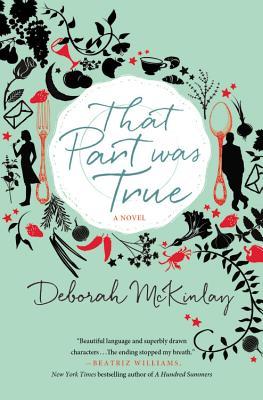 When Eve Petworth writes to Jackson Cooper to praise a scene in one of his books, they discover a mutual love of cookery and food. As their letters criss-cross the ocean that lies between them, friendship and then romance blossoms despite Jackson’s colourful love life and Eve’s tense relationship with her soon-to-be-married daughter. Little by little, Eve and Jack begin to believe that they may have a chance to change their lives and possibly get a second chance at happiness. They just need to actually meet…

A gorgeous, escapist read about food, friendship and falling in love from afar…

That Part Was True begins when Eve sends a letter to successful American author, Jackson Cooper, complimenting his novel, Dead Letters. Jackson writes back to Eve and it soon appears that they have a lot in common, particularly their love of food and cooking.
In their letters they only vaguely touch upon the goings on in their personal lives, which are far from great. Jack is struggling to write his next bestseller and isn’t even sure that writing is for him anymore, whilst Eve is suffering from deliberating panic attacks and is finding it difficult to establish a relationship with her daughter, Izzy, who has always been closer to her (now deceased) Grandmother than Eve.
Eve and Jack’s correspondence continues across the Atlantic until the possibility of them meeting is raised. Not only is Eve certain that her anxieties would stop her meeting Jack in the flesh, but the big question is would the pair actually have anything in common if they were to meet in ‘real’ life?

I was so excited about reading That Part was True. It sounded idyllic and the just the kind of novel that I would love. I have a thing about novels that are written in letter form, although That Part Was True is only partly written in correspondence between Eve and Jack, the rest is told from their viewpoints and covers some of the other happenings in their personal lives.
As much as I would have loved a whole novel of letters (I’m weird like that…) I thought that the way this novel was written was really effective. It was great watching the relationship between Eve and Jack develop through letters, but I also really liked having that extra insight into what they were going through, for example Eve’s struggles to understand the relationship with her daughter and her mother, Virginia, and then Jack’s relationship difficulties after his wife has left him for another woman.
I was drawn to these two characters right from the off and found them, the struggles they both faced, and their developing relationship, fascinating. I really felt for Eve and I wanted things to turn out right for her. I really liked Jack too and could feel his frustration with how things were in his life. I just wanted to pick these two characters up and put them together where they could fix each others loneliness and troubled lives and live happily ever after. Although things are never quite that simple…
I had an idea in my head as to how things would turn out in this book and I was completely misguided. But that’s not to say that I don’t think the novel had a fitting ending; it just wasn’t the one that I had been expecting, but I still loved it. In fact I think it’s one of my favourite endings to a novel ever. There were so many things right with how Deborah McKinlay bought this story to a close.

In fact I really loved this story as a whole. It wasn’t as I expected it to be in many ways, but that made it all the more enjoyable. It’s certainly not your typical romance but it’s extremely heartfelt and engaging.
It’s only a short novel (242 pages to be exact) but those 242 pages will evoke a lot of feeling and not only make you realise that it’s never too late in life to make a change, but also remind you that even the smallest of pleasures can bring people together.
After thoroughly enjoying this charming and tender novel I can’t wait to work my way through more of Deborah McKinlay’s books and it’s no overstatement to say I’m expecting big things.

A huge thank you to Lucy at Orion for having me as part of the blog tour for the fantastic That Part Was True. ♥

Deborah McKinlay has published half a dozen non-fiction titles in the UK, and her books have been translated into numerous languages. Her work has appeared in British Vogue, Cosmopolitan, and Esquire. She lives in South West England. The View from Here is her first novel.

2 thoughts on “Book Review: That Part Was True by Deborah McKinlay”