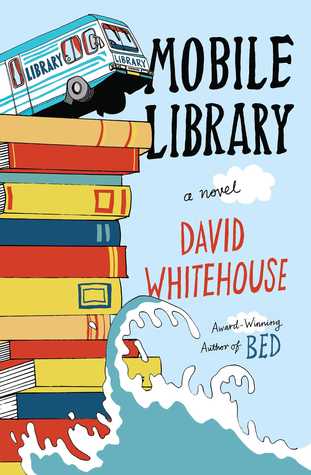 Twelve-year-old Bobby Nusku is an archivist of his mother. He catalogues traces of her life and waits for her to return home.

Bobby thinks that he’s been left to face the world alone until he meets lonely single mother Val and her daughter Rosa. They spend a magical summer together, discovering the books in the mobile library where Val works as a cleaner. But as the summer draws to a close, Bobby finds himself in trouble and Val is in danger of losing her job. There’s only one thing to do — and so they take to the road in the mobile library…

Bobby Nusku is relentlessly bullied at school and things aren’t much better at home living with his abusive bully of a father and his girlfriend. Bobby’s mother has gone, although he is certain she will return and he spends his time collecting traces of her life for his ‘files’ in preparation for her return.
Bobby’s only ally is his school friend Sunny, who takes him under his wing and comes up with a genius idea – he is going to turn himself into a cyborg and then be able to protect Bobby from all of the bullies (including his own father). However their plan comes to an abrupt end when Sunny is seriously injured and Bobby is left to fight the bullies alone.

Bobby’s life takes an unexpected turn when he meets a disabled girl in his neighbourhood called Rosa. He soon forms an unlikely bond with Rosa and is introduced to her mother, Val. Val takes a shine to Bobby and when she loses her job cleaning a mobile library and sees the extent of the suffering he’s been subjected to at the hands of his father, she concocts a plan for the three of them (plus their dog, Bert) to abscond (or ‘go on an adventure’) in the mobile library.
However this turns out to be more of an adventure than the sorts that take place in the many books that adorn the mobile libraries shelves, especially when they meet ex-soldier Joe and set off on the run across the country as a family.
They know that their story has to end at some point but will it have an ending like the hundreds of books they’ve devoured on their journey? Of is there really such a thing as an ending at all…?

I was drawn to this novel immediately, possibly because I work in a library and I especially love stories that involve libraries and books, but also because it sounded incredible. I was desperate to see how this story would play out from the synopsis – I couldn’t quite imagine it at first, it sounded delightfully crazy, but when you actually come to read it everything makes perfect sense and this group of people running away in a mobile library doesn’t seem so strange after all…

I loved how ‘The End’ was actually at the start of the book. Once you’ve read this chapter you’ll be drawn into the story and also given an impression of how the story is going to play out (although this may not necessarily be the correct impression) I wasn’t sure what to make of starting a book only to be faced with the words ‘The End’ but any doubts I had were soon extinguished and I thought it made a brilliant basis for the rest of the story (it’ll also have you itching to reach the ‘proper’ end of the story too…It’s literally a cliff-hanger…)
There were just so many things right with this book, I’m not sure how to coherently form them all into sentences. Firstly; it’s a book ABOUT BOOKS.

“There were no windows, yet there were thousands of windows, in every book on every shelf.”

There are so many bookish references, from the books that Bobby, Rosa and Val devour on their journey, to similarities with what’s happening to them and their adventures to goings on in well-loved novels. They’re all there; Of Mice and Men, Harry Potter, Tom Sawyer, The Lion the Witch and the Wardrobe…

I also loved the quirky characters and their relationships with one another. Rosa and Bobby’s friendship, Bobby and Sunny’s friendship, Bobby and Val’s friendship, Val and Joe’s friendship, Joe and Rosa’s friendship. They were all so special, each in their own individual way and there’s no doubt that these characters will touch your heart (I KNOW, how cheesy of me to say such a thing, but it’s true!) Once they were travelling as a foursome (plus Bert) I completely fell in love with this strange little ‘family’ that they’d formed and as well as wanting to be on that Mobile Library with them, sampling all the books, having Rosa write my name in her notebook and helping Joe and Bobby pilfer some paint, more than anything I just wanted them to be left alone to carry out their little adventure.
It’s not all adventure and fun though, so be warned that there is a darker side to the story too, which can make for quite upsetting and unsettling reading at points. I felt that this strengthened by bond with certain characters (and fuelled by hatred for others) though and pulls you into the story further still.
It’s surely a real achievement for the author when a reader gets as wrapped up in the story as I did with this one. I still can’t get it out of my head now and I’m sure it’ll stay with me for a long time to come. David Whitehouse is a first class storyteller; he packs this story with emotion, fantasy and love. Whilst Mobile Library may be classed as adult fiction, I found it to be a novel which will transport you back to your literary-youth and make you nostalgic for your own adventures.
If you loved David’s previous novel, Bed, then you’ll love this, if you love books you’ll love this, if you love stories packed full of adventure and excitement then you’ll love this.

Reminding us of the importance of love, friendship, families and books – Mobile Library is a must-read for 2015.

A huge thank to you Scribner for approving me to read and review Mobile Library on NetGalley. ♥

David Whitehouse’s first novel, Bed, winner of the 2012 Betty Trask Prize, has been published in eighteen countries. He has several TV and film projects in development with Film4, Warp, the BBC, and others. He writes regularly for the Guardian, and The Times, and is currently the Editor-at-Large of ShortList magazine.