Today I’m delighted to welcome CeCe Osgood to Bookaholic Confessions. CeCe released her debut novel, The Divorced Not Dead workshop in January last year and it’s also Book One in the Dorsey Bing Series. I’m really excited about reading this novel, it sounds such a fantastic idea for a storyline and I had lots of questions for CeCe about where she gets her inspiration from, what we can expect from Dorsey Bing and why she loves writing romance…

Hello CeCe and welcome to Bookaholic Confessions! Thank you so much for participating in this interview. Would you like to start by introducing yourself…?

Thank you, Holly. It’s a pleasure to be here. After college, I worked in film production for quite some time before switching to the creative side. When  I moved from Texas to Los Angeles, I became a freelance story analyst, working primarily for HBO.  I also was a story judge for the Nicholl Fellowship, which is sponsored by The Academy of Motion Picture Arts & Sciences (the Oscar folks). It’s considered the top screenplay competition in the U.S.  Some years later, I moved back to Texas and decided it was time to pursue my lifelong dream of being a novelist.

Can you tell us a bit about your debut novel, The Divorced Not Dead Workshop released 19th Jan 2014)?

I had a late night conversation with a newly divorced friend, and we groused a lot about the dating scene, especially after you’re divorced. A few days later, I woke up one morning with the title, the main character, the setting (a cruise ship for the most part) and a fragment of the plot about a dating workshop for divorced men. As the story progressed, I realized that I wanted to tackle the bloom of self-awareness and the difficulty of relationships in a comedic and light-hearted way. Laughter is, I believe, a miraculous gift from the heavens.

Here’s a quick outline of the story: Divorced five years ago and fretting about a recent break-up with Theo, her sexy Brit boyfriend, Dorsey Bing brainstorms about holding a dating workshop for divorced men. Too bad she’s an idea person with zero follow-through. That all changes when her feisty pal, Pilar, an ambitious event planner, embraces the “divorced not dead” concept by setting up the workshop, putting herself in charge and getting Dorsey to agree to be her “go-fer.”

A snag occurs when Dorsey’s widowed stepfather, Ralph, and his bride-to-be, Audrey, schedule their wedding cruise to Cabo for the very same weekend the workshop is being held. Dorsey and Pilar lick that hurdle by choosing to hold the workshop during the cruise. But do things ever really work out as planned. No. No, they don’t.

A startling mishap, rebellious workshop attendees and the arrival of Audrey’s nephew, the handsome but wily Finn Woodall, soon send things topsy-turvy for Dorsey. More trouble arises with the unexpected re-appearance of Theo. Will Dorsey and Theo rekindle their relationship? Or is she smitten with Finn who just might be a back-stabbing weasel? And has the workshop made a difference in what Dorsey desires from life … and love?

The Divorced Not Dead Workshop is the first book in the Dorsey Bing series. Can you tell us a bit more about the series and what we can expect from it?

When I got to end of the story, I realized how much I loved Dorsey. She’s smart, funny and on her way to developing a robust self-awareness. I realized too her life is way more entertaining than mine. Spending time with her made me happy, and I’m intrigued to see how she handles getting what she wants in life, or thinks she wants. Even though Dorsey seems to be on track now, wham … suddenly things can go wacky and out of control. How does she react when that happens? Plus, I have to admit I’m curious about Finn’s ex-wife.  She’s barely mentioned in Book One. She’s up to something. I’m just not quite sure what it might be at the moment.

I love the synopsis for your novel and I’m with Dorsey – I think a workshop for divorced men sounds great! What inspired you to come up with this idea?

Well, the dating scene can be awfully nerve-wracking, and the online dating scene, well, that’s just “the ninth circle of hell.”
After the chat with my newly divorced friend, I thought wouldn’t it be fantastic to be in a workshop where you could share all the weird stuff you feel about dating, and maybe, if you’re lucky, you might meet someone who feels the same way and isn’t too afraid to be honest about it.

In the first paragraph of the book, Dorsey says the workshop could be a way to “desuckify” guys, but, of course, the workshop morphs into a lot more than that Dorsey snarky wish. I won’t share more details or might spoil a plot point or two. 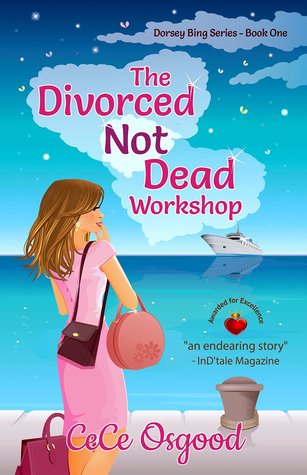 Is Dorsey a completely fictional character or is she based on anyone in real life? Are any of the things she experiences in the novel things that you’ve been through yourself?

Mostly fictional. There are a few of my own experiences in the story. One I attribute to Finn. It’s when he’s mulling over the bird that didn’t fly away. That actually happened to me, and I was strongly affected by it. Why didn’t I slow down? Why did I assume the bird would fly away?  What other assumptions do I make all the time … that are wrong?

Also, I like to think I share Dorsey’s humorous perspective about herself and the life she’s leading.

Before becoming an author you worked in the film industry in LA. How exciting! What did you get up to during your time there?

I read and evaluated screenplays, novels, non-fiction books, newspaper articles. Weekends, nights, days, all the time. Frankly, I burned out on reading after so many years of doing it to make a living.  One perk, though, when I was reading for The Academy, was being able to see first-run movies for free in The Academy’s state-of-the-art theatre with two huge Oscar statues staring down at the audience.

I also met quite a few actors and celebrities.  One year, Eva Marie Saint and Jack Lemmon hosted a celebration for the winners of the Nicholl Fellowship, and at another gala, I shook Carl Reiner’s hand and got to see Steven Spielberg and George Lucas up close during a special presentation. There were many other actors, directors and producers, but those are the most memorable. Carl Reiner is such a gentleman … and a hoot!

I’m enchanted by the warm, wonderful feelings I get when the leads are conversing or interacting. Those exchanges, even when the two of them are being irritable or are crazy mad at each other, well, that just tickles me.

Who are your favourite authors and what books do you enjoy reading?

That’s a hard question to answer. There are so many. I guess, for light-hearted women’s fiction and romantic comedy, my faves are Susan Elizabeth Phillips (Ain’t She Sweet) and Sophie Kinsella (I’ve Got Your Number, Can You Keep A Secret?). For darker stories and suspense, I’m a big fan of Liane Moriarty (The Husband’s Secret  and Big Little Lies), P.D. James and Harlan Coben.

I’m fond of cheeky female sleuths, so have a chick lit mystery series in progress, and my second Dorsey Bing romantic comedy is emerging from the soggy bog I like to call my mind.

A huge thank you to CeCe Osgood for participating in this interview. ♥