I have a very special guest to welcome to Bookaholic Confessions today, debut author Helen Giltrow. Helen’s novel, The Distance was released in May 2014 and is about to come out in paperback TODAY, click here to get your copy. It sounds like an incredible read and I’m massively looking forward to being introduced to lead character Charlotte Alton! Here Helen tells us a little more about writing The Distance and how it feels being awarded 5-star reviews…

Hi Helen, a huge, warm welcome to Bookaholic Confessions! Thank you so much for participating in this interview. Would you like to start by introducing yourself…?

It’s lovely to be here – thanks for inviting me!

I live in Oxford, in a small flat with a lot of books. I love coffee, reading, writing, running, and spending time with my partner. Dream holiday? New Zealand, or skiing. Perfect evening in? Supper and wine with friends, or on the sofa, reading.

Can you tell us a bit about your debut novel, The Distance (released in paperback on 26th February 2015 by Orion)?

Charlotte Alton used to run a clandestine business selling information to criminals. A year ago she put it all behind her. But now a client with whom she has a history has come to her with a job: he’s been ordered to kill an inmate in an experimental prison, and he needs her to get him in there. And this time she can’t walk away.

The lead character Charlotte Alton sounds like a fascinating character who I cannot wait to get acquainted with! Is she completely fictional or is she based on anyone in real life?

I love writing about Charlotte Alton. She can be very focused but she’s also conflicted. As a character she has lots of layers. The first layer is her cover story – a wealthy, idle woman living in London’s Docklands. Then there’s the cool-headed criminal businesswoman, who appears untroubled by the morality of what she does. But underneath that she has a moral code – and all sorts of emotions she can barely acknowledge.

I like the idea that we’re all a bit like that: we all have these layers to our personalities , each layer hiding another. But I didn’t consciously base her on anyone I know. A few people have said that in parts she’s a bit like me, but I’m not sure how true that is. Certainly I’d make an awful criminal: I’d feel too guilty, and I’d worry about being caught.

Do you plan to write a series of books involving Charlotte Alton?

Definitely. She’s the sort of character who comes with a lot of stories. Her whole adult life has been about data – she’s obsessed with information – so if you present her with a mystery she can’t walk away; she has to know the answer. And because of her criminal background and resources she can go places where police and intelligence officers could never go. 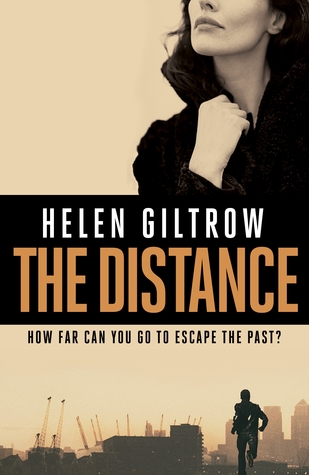 What did it feel like when The Distance was first released in May 2014?

I’ve been writing stories since primary school, but largely in secret. To have a book out was both exciting and terrifying. I’m only just getting used to it now.

The Distance has had some incredible five-star reviews. How did it feel to receive such complimentary reviews for your debut novel?

I’d worked hard on the book, but I had no idea how readers would respond to it. So to get that sort of feedback is amazing. I’m cautious about reading reviews when I’m writing – even the positive ones can be distracting – but I really appreciate it when people take the trouble to say they’ve liked a book. Especially when it’s kept them up all night! That means a huge amount to me.

I first had the idea for The Distance back in 2001 but family upheavals kept interrupting and I didn’t start work on it seriously until 2009. By late 2011 I had a draft that was good enough to bag me an agent, but still I wasn’t convinced anyone would want to publish it. I couldn’t believe it when my agent phoned to say five publishers had put in bids for it.

As part of the auction I met all five editors. Generally we’d just have a cup of coffee and a chat but one editor spent two hours going through the manuscript in detail, picking out all the things he thought didn’t work. I’m amazed he did it – he was quite tough, and I could easily have walked away. What he didn’t know was that I had my own list of criticisms of the manuscript – and our lists matched. So I signed with him. I ended up rewriting about a third of the story, but I’m so glad I did.

Do you have a favourite thriller of all time? Which authors are amongst your own favourites?

I read a lot of US crime writers, but right now I’m hooked on Tana French’s Dublin-set mysteries. She’s terrific.

And it turns out she and I are both fans of Donna Tartt’s The Secret History – the bestselling story of a group of brilliant US college students who share a murderous secret. Does that count as a thriller? It’s probably my favourite of all time.

What do you think you’d be doing if you weren’t an author?

I used to work in educational publishing, so I’d probably still be working as an editor – and still writing on the quiet.

No surprises there – I’m working on another book about Charlotte Alton.

A huge thank you to Helen for participating in this interview and to Lucy at Orion. ♥

Click here to get hold of your copy of The Distance in paperback & here to download in eBook format.