Vinny Butler has used his time in prison well: to plan the downfall of all who’ve wronged him.

As always with the Butlers, family comes first: Vinny’s brother Michael may think he’s the top dog running the family business, but it won’t last when Vinny finds out how good his brother’s got it.

In the background, Little Vinny thinks he’s one step ahead of his dad as always, and playing a dangerous game: he’s still keeping a secret he’ll take to his grave – even if that means that he sends more people to theirs first…

The Butlers are at war, and they’re taking everyone down with them – it’s all going to end in flames…

Prepare to be shocked…Ready? Ok. The Wronged is the FIRST EVER novel of Kimberley Chambers that I have read. I cannot explain why this is, but I have come to the conclusion that I have been missing out- big time.
Fans of Kimberley’s will be aware that this is the third book in the series following the exploits of the notorious Butler family. First thing I learnt: no one messes with the Butler’s. If they do they will regret it (gulp).
The Wronged kicks off in 1985 with the head of the Butler family Queenie and her sister Vivian, visiting the Church after a string of unfortunate deaths in the family. As a newbie to this series of books I could tell that this family were going to take me on one heck of a ride right from the off.
We then go back to 1980 to the funeral of one of the Butler clan (I won’t say who just in case it would be a spoiler for those reading the first two) and this death is going to bring serious repercussions for the whole family. Eeeek.
I loved how the action is happening in this novel right from the off. Forget about building up to the drama; The Wronged STARTS with the drama. You are plunged right into the story and there’s no turning back from then onwards.
Despite not knowing the family it didn’t take me long to get a rough idea of who came where in the Butler hierarchy. I found Queenie and Vivian to be such excellent characters and they made me chuckle numerous times, especially with the banter between the two of them. Naturally Vinny Butler terrified me and his son Little Vinnie made me squirm. Some of the things he does do not make for easy reading at all but he’s a gruesomely fascinating character to read about. For example how he justifies all his wrongdoings by blaming other people and the scary thing is he actually believes what he is thinking.
Kimberley Chambers is absolutely fantastic at creating tension, both within the storyline and amongst her characters. You’ve always got that feeling of being on edge as you’re never quite sure where things are going. The twists and turns of the novel are so close that you can almost smell them but at the same time you never see them coming.
I’m still fairly new to this genre and the only book similar I can re-call reading is The Faithless by Martina Cole (which I also really enjoyed). The Wronged has completely changed my outlook on these ‘gangland thrillers’ and I think I even surprised myself at how much I enjoyed this novel. It’s always good to try something outside your comfort zone and my love of this novel supports that idea completely. I just couldn’t get enough of this story. There was a new shock practically on every page; it will have you holding your breath, surprise you and most of all engross you as you immerse yourself in the lives of the Butler family.
I’m not quite sure how I am expected to wait until next year for the next instalment, but I will console myself by going and discovering the rest of Kimberley Chambers (no doubt, fantastic) novels.
The Wronged is 468 pages of action, suspense and terror. It’s one of the juiciest stories I think I’ve ever read and it had me on the edge of my seat throughout.

A huge thank you to publishers HarperCollins for very kindly sending me a copy of The Wronged to read and review. ♥ 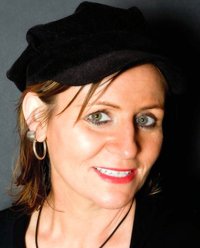 Kimberley Chambers lives in Romford and has been, at various times, a disc jockey and a street trader. She is now a full-time writer and is the author of nine previous novels.

2 thoughts on “Book Review: The Wronged by Kimberley Chambers”