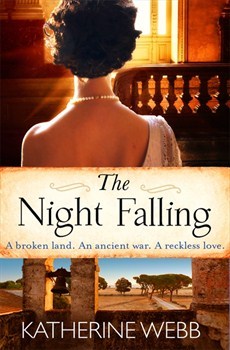 Puglia, 1921. Leandro Cardetta, born into poverty, emigrated to America to make his fortune and has returned home to southern Italy a rich man, accompanied by his glamorous wife, Marcie, an ex-showgirl fighting middle age. Now Leandro has money enough to hire renowned English architect, Boyd Kinsgley, to renovate a crumbling palazzo into an Art Deco statement of wealth, and host Boyd’s teenage son and his diffident young second wife, Clare, for one extraordinary summer.

Under the burning sky, beyond the luxury of Leandro’s home, tensions are high. Veterans of the Great War are desperate for work and food. Among these is Ettore, Leandro’s nephew. Gripped by grief at the loss of his fiancée, Ettore has sworn to identify Livia’s killer, and take his revenge. He is too proud to go to his uncle for charity, but when he injures himself one day, he has no choice but to knock on Leandro’s door. Meeting Clare there will change everything – and in the most violent way.

During the fierce summer of 1921, all these lives converge. Exactly how did Leandro grow rich in America, and what is the strange hold he has over Boyd? What happened to the first Mrs Kingsley, and what secret haunts the outwardly exuberant Marcie Cardetta? Hearts will be broken, blood will be spilt and the hardest of life’s lessons will be learnt as shadows fall.

Set in 1920s Italy, The Night Falling follows the story of married couple Clare and Boyd Kingsley. Architect Boyd is summoned over to Puglia to work on design ideas for a property belonging to one of his past acquaintances, Leandro Cardetta. Boyd sends for Clare and his son, Pip, to travel over to Italy from London and spend the summer with the Cardetta’s.
However when Clare arrives in Italy and realises that the country is in the grip of war and tensions are at breaking point between Veterans of the Great War and the farmers and land owners she is desperate to flee back home at once. Only for some reason Boyd is reluctant to let her go and it soon becomes apparent it’s not so much Boyd who is intent on keeping Clare and Pip in the country, but Leandro. He claims that it is so they can keep his American wife, Marcie, company, but surely there’s more to it than that?
We also follow the life of Leandro’s nephew, Ettore, who is struggling to live as a peasant and is still eaten up with anger over the death of his fiancée, Livia. Living in a tiny room with both his elderly father, sister and her baby son, Ettore is forced to work gruelling hours out in the fields just to make sure his family is fed. However, when he becomes injured and can no longer work he is forced to seek help from his wealthy uncle, Leandero. Ettore reluctantly agrees to stay with his uncle whilst he recovers from his injuries. However, this leads him to meet Clare – and once he does it becomes clear that everyone’s life is about to change during once explosive summer…

This is the first novel of Katherine Webb’s that I had read and I can say with utter certainty that it won’t be the last.
The Night Falling was a truly absorbing, raw and highly emotional story that touched me in ways I never imagined.
I’m ashamed to say that I knew little about how things were in this part of Italy during the 1920s. I had no idea of the suffering, deprivation, violence and hunger that so many on its inhabitants suffered. Katherine Webb does not scrimp on detail and gives a hugely realistic insight into the lives of the peasants. Her vivid descriptions bring to life the heat, the poverty, and most prominently the hunger that these people experienced. I had no trouble imagining the conditions that they were living in and my heart broke for the horrors that they were subjected to. It makes for eye-opening and quite disturbing reading at points and the imagery in Katherine’s writing is superb.
I loved the way that you could feel the story building. The further you progress; questions are answered, but immediately more arise. I was desperate to know what was going on with Clare and Boyd –what secrets was he hiding? Why had he behaved so strangely in the past? Why did Leandro have such a hold over him? I guarantee you will not be able to stop turning the pages until all is revealed.
The story is told in alternating chapters between Clare and Ettore; giving you an insight into the difference in both characters lives. From Clare’s point of view you get a glimpse of the life Leandro now leads – wealthy, privileged, but still not being fully accepted because of his poverty stricken roots. Then you learn of Ettore’s hardships and I warmed to him immediately. He is strong, determined and values his family above all else.
All of the characters in this novel are flawed and complex – making them extremely realistic and also fascinating to read about. I loved Clare and seeing the change in her from when she first arrives in Italy to the end of the novel is amazing. She starts off meek and agreeable but by the time you turn the last page she has completely transformed into a brave young woman who is unafraid to fight for what she wants.
The relationship between Clare and Ettore really got to me. Whenever they were together I almost felt scared. I was so worried that someone would stumble upon their secret and then what would happen to Ettore? I was almost holding my breath. I knew that the odds were stacked against their relationship but you can but hope. Although saying that hope is something that was running low in Puglia during that time…
Then you have Leandro and Marcie. My views of Leandro regularly changed throughout the course of the book, but I was never quite sure if I could trust him one hundred percent.
I was completely enchanted by this story. Whilst I always seem to enjoy historical novels, it’s a genre I am still fairly new to and I anticipated that it would take me perhaps a little longer to become fully immersed in the storyline but that couldn’t have been further from the truth as I took to this novel right from the off.
On the whole I am a fairly quickish reader and I like to whizz through books I’m enjoying, however The Night Falling was the exception to this. I found myself enjoying this novel at a slightly slower pace, purely because I wanted to full take in everything I was reading. I also had to stop and think about some of the things I’d just read.
All in all The Night Falling is a captivating, satisfying, and haunting read. I feel as though I learnt an awful lot from the story and I simply cannot wait to delve into more of Katherine’s books, hopefully in the immediate future!

A huge thank you to Lucy at Orion for sending me a review copy of The Night Falling. I was also delighted to be a part of the blog tour – you can check out Katherine Webb’s Guest Post about her reading & writing confessions here. ♥

I was born in Kent in 1977 and grew up in rural Hampshire before reading History at Durham University. History remains a passion, and I write character-led mystery dramas, often with historical settings. I love to explore the way past events can reverberate in the present, and I’m fascinated by the vast grey areas in human morality and behaviour.

My debut novel ‘The Legacy’ was voted viewers’ choice for Best Summer Read on the Channel 4 TV Book Club in 2010, and was nominated for Best New Writer at the National Book Awards in the same year. Subsequently, ‘The Unseen’,’A Half Forgotten Song’ and ‘The Misbegotten’ were all Sunday Times Top Ten bestsellers, and my books have been translated into 24 languages around the world.