I’m really excited to welcome debut author, Tess Woods, to Bookaholic Confessions today. Tess’ novel, Love at First Flight is released TODAY (click here to grab hold of your copy) and it sounds fantastic. I can’t wait to get stuck in to this novel, but in the meantime let’s learn a little more about the lovely Tess herself… 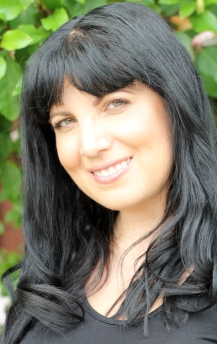 What inspired you to write Love at First Flight?

I’ve always been inspired by the tragic love story, the story of great love that just can’t be. My favourite book The Bridges of Madison County stayed with me years after reading it and played on my mind. Then I read Twilight and out of nowhere I had to write my own book. Before this I had never entertained the idea of writing. But the longing in Twilight and the knowing that the one you love is the one that is dangerous for you resonated with me and I just had to write about that. So with the themes of desire and danger, I wrote a book about a married mother, because I wanted to write of what I know. I wanted to bring the great love story into the world of the typical suburban mum who is chasing after kids, working and running a home. I wanted her to have that Romeo and Juliet moment. So I wrote ‘Love at First Flight’.

Did you use real events/people from your own life as inspiration when writing Love at First Flight?

Hell yes! I really do believe you write what you know. Of course the novel is a novel, not a biography, and I credit my imagination for it, but I have definitely taken inspiration from events and people in my life.

It is no coincidence that Mel has long black hair and is a health professional who falls for a tall, dark, handsome and broody, moody physio. That’s me and my husband! But the great thing about writing is that I get to make Mel as hot as I like and morph her into someone as sexy as Angelina Jolie – hey, it’s my prerogative isn’t it? Matt’s parents are very much inspired by own mother and father in-law who lived out in the country on a sprawling property where we used to go to wind down from the city with them. Matt’s sister is a powerful human rights lawyer, just like two of my world-beating cousins. I even used my children’s names for characters – Tom, Lara and Lachlan. (Lara has a blink and you miss it part because I am saving her. I have big things planned for Lara in book two!)

And I incorporated many real life events into this fictional story. My husband and I tragically lost our third child Lachy at birth, my darling friend Jess committed suicide, my darling friend Julie fought a fierce battle with cancer and those stories and a few more events that shaped my life made it into the book. Writing was my counselling!

Also, I am inherently lazy so the fact that the story unfolds in Perth and Melbourne, the two cities I’ve lived in most of my life, is not by accident. The more you know, the less you research. Some writers thrive on research, me – not so much!

What is the best advice you were given for writing?

The wonderful writer Nikki Davies who assessed the manuscript in the early days, told me to imagine every scene as a scene on a stage. The curtain opens- What do you see? What should the audience feel? What are the actors saying and how do they move around? What expressions are on their faces and in their voices? Start the scene with an opening and end it with closure. Do this for every single scene in the book. Once I learnt to write in scene like this, my writing changed dramatically and it became more authentic and palpable.

More recently, when we were doing the copyedit of Love at First Flight, the brilliant author Dianne Blacklock taught me the concept of Chekhov’s gun, one of her favourite writing tips, which is now one of mine too. Chekhov himself advised, “Remove everything that has no relevance to the story. If you say in the first chapter that there is a rifle hanging on the wall, in the second or third chapter it absolutely must go off. If it’s not going to be fired, it shouldn’t be hanging there.” This helped cut a lot of excess junk from my writing which was clogging it up.

How long did Love at First Flight take to write?

The story was written start to finish in six days. For real. But it was a mashed up piece of drivel! It took eighteen months and five complete re-writes with the help of two manuscript assessors who kept suggesting changes and sending it back to me before I felt confident enough to send it to literary agents.

It was a long and windy road with many speed humps and detours!

I wrote Love at First Flight in a week. Six years later it was published. In the meantime it was rejected by all twenty-two literary agents in Australia who represented commercial women’s fiction writers. Every last one of them.

After opening the front door to find my manuscript sitting on the porch in the reply paid envelope I had provided for the last remaining agent, I slid the manuscript under the spare bed, dusted myself off and forgot I had written a book. The submission process to agents had been exhausting and soul destroying. I couldn’t face beginning the submission process again with publishing houses. I figured I was in with a slim with to none chance with a publisher anyway if none of the agents wanted it. I was done.

Then along came an email. It was from literary agent Jacinta Di Mase. Jacinta had considered Love at First Flight two years earlier before deciding she didn’t want it. I was particularly devastated when Jacinta had initially rejected the book, because I was convinced she would take it. It was just this really strong gut feeling that I had a connection with her and she would be my agent. In the end, my gut was right (always trust your gut!)

Jacinta emailed me in 2013 and it went something like this, “Hey, I still have that book of yours in my mind even though it’s been a couple of years since I read it. So, did you sell it yet? And if not, are you prepared to make some pretty big changes I want done so that I believe in it enough to go in and bat for you with publishers?”

Excuse me, what? YES I would be prepared to make changes!

So I started re-writing and this re-write was huge. A year later, in April 2014, I was ready to resubmit it to Jacinta. I hit send on the email and the next day headed off to Europe for the trip of a life-time with hubby and kids in tow and tried to put it out of my mind. If Jacinta wanted it, great, if not, I would self-publish it one day and sign the inside cover for my mum.

Four weeks later, we were in Cornwall on our “book tour of the UK”. We were visiting places based on books we loved. Cornwall was my choice because of my love of The Shellseekers by Rosamunde Pilcher which was set there. We had arrived the night before from London (where we did all things Harry Potter). I checked emails from home and wow! Jacinta loved the new version and she had already started the rounds of publishers. That this happened the day I was living out a long held dream to go shell-seeking just like a favourite character from a book was pure magic.

Fast forward eight months of nail-biting, finger crossing, acquisitions meetings where it was rejected at the last minute, editors loving it and then not loving it and then loving it again before deciding no they really didn’t love it after all and then along came an editor who believed in my writing and was passionate enough to stand by the story until it had full approval from everyone in her publishing team. And that was Anna Valdinger at HarperCollins. Oh how I love her! So I finally had a contract. With an April 2015 release, this is just over six years since I sat down and put pen to paper.

What do you hope readers will take from your book?

More than anything I want my readers to be entertained. I want them to escape whatever they are doing and join Mel and Matt in their story. I want readers to be thinking about Mel and what direction her life will take when they have to leave her to get on with their real lives, and I want them to be happy to re-unite with her again when they pick up the book. I’m not out to challenge anybody and I don’t have a world-changing message for anybody. I simply want to entertain. When readers finish Love at First Flight, I would hope they are satisfied and that it captured their imagination.

I’m an Egyptian, born and bred, who lost the Arabic name when I married an Englishman. Our engagement party could easily have been a scene in My Big Fat Greek Wedding. The bragging about Egypt in the book, yeah, that’s why.

I speak French and use it to speak in code to my mum when I want to keep secrets from the kids.

I am obsessed with Princess Kate and Prince William. I wish they were my neighbours and we could have tea and talk about Posh and Becks. I tried to put them in the book. The folks at HarperCollins cut them out. Thanks guys.

I love kids art and craft. More than kids do. I bribe my twelve-year-old to do playdough with me. I especially love making spaghetti hair out of it.

I was the class clown as a kid and now, as an adult, I’m the school-mum clown. Everyone thought my book would be funny. My book is not funny. Go figure.

The first grown-up book I ever read was The Thorn Birds by Colleen McCollough. I remember sitting in church at the time staring at our Catholic priest who was NOT at all hot and feeling sad that I would never have an illicit romance with him.

A huge thank to you Tess. ♥ Don’t forget to download your copy of Love at First Flight and check out the fabulous trailer below…