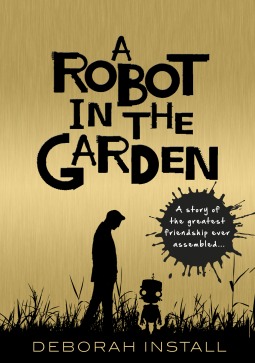 A story of the greatest friendship ever assembled.

Ben Chambers wakes up to find something rusty and lost underneath the willow tree in his garden. Refusing to throw it on the skip as his wife Amy advises, he takes it home.

Ben and his wife Amy are experiencing a rocky patch in their marriage when one day a strange-looking robot appears in their back garden. Amy is all for taking it to the tip- she’s been looking in ‘What ‘Bot’ magazine in search of a high-tech android like her sister-in-law for ages. She definitely doesn’t want the broken, bashed-up robot that’s set up home in her garden. However, Ben sees things differently and immediately takes a shine to ‘Tang’. He cleans him up and teaches him how to speak in the hope that he will reveal where he’s come from and why he’s in such a poor state of repair. Tang consumes Ben, much to Amy’s disgust and it proves to be the final straw in their marriage as she ups and leaves.
However, Ben is more concerned about finding out who made Tang, and whether he can be fixed. There’s a cylinder of liquid inside Tang which is slowly running out. It’s a race against time for Ben to discover how Tang can be mended and in no time at all the pair are on a (premium, aherm…) flight to California in an attempt to track down Tang’s manufacturers. A heart-warming and humourous adventure follows, in which both Ben and Tang learn a lot more about themselves than they could ever have imagined…

I had been looking forward to reading A Robot in The Garden for a long, long time. It sounded fun, quirky and very much unlike anything I’d ever read before. What I was not expecting was to become so involved in the story and to find myself falling a little bit in love with a robot…
The story played out differently to how I imagined in the sense that androids and robots play an important part in most peoples lives and are considered the norm. However this was one aspect of the story that I loved! I mean…can you imagine? I really felt sorry for poor Tang and the way he was treated (for example a hotel that welcomed androids, but didn’t allow robots to stay) I’d never really considered the difference between robots and androids but now I am much more clued up…
My hands-down favourite thing about this novel was Deborah Install’s creation of Tang. She has created one of the funniest, cheekiest and sweetest characters ever and she really brought him to life for me in a way that I couldn’t have imagined. Once Tang learns how to get his own way there is no stopping him – he literally has Ben in the palm of his grabber. Their relationship is one that will stay with me for a long time. At points I couldn’t believe that Ben could be as naive as he was, but the way in which his relationship with Tang forces him to mature and grow is touching. Their journey (both physically and metaphorically) was just amazing and I found myself loving every page. I could happily have read about these two forever and ever. They made me laugh, they made me think and they completely made me lose myself in the story.
I love the simplicity of Deborah’s writing, allowing you to use the words she gives you and conjure up an image in your own mind of the characters and the situations that they find themselves in. Her fantastic storytelling enabled the story to really come to life for me and to achieve that really is something special. I say that mainly because I don’t read all that much fantasy or Sci Fi, so I was concerned how I would find a story where owning your own android is an everyday occurrence, but it wasn’t a problem at all. In fact – I loved how this story captured my imagination and once I got to grips with androids manning bus stations and the important role that they play in every-day-life in this novel I didn’t find it to be a problem at all.
I am very excited to have now discovered Deborah’s writing and I’m eager to find out what delight she will be bringing us next! Whilst I found the ending to be really satisfying I’d still love a sequel, if only just to see how these two wonderful characters are getting on…

A huge thank you to publishers DoubleDay for approving me on NetGalley to read A Robot in the Garden. Thanks also to Deborah Install and Ben Willis. ♥ 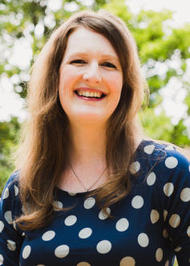 Deborah Install has been writing fiction since childhood, submitting her first book to a publisher at the age of 8. Her love of writing persisted, leading to a number of jobs, including web journalism and her most recent role as copywriter at a design and marketing agency. She lives in Birmingham, UK, with her husband, toddler and affectionate but imperious cat. Her debut novel, A ROBOT IN THE GARDEN, is inspired by her own young son, and is backed up by copious technological research.
♥Deborah Install♥ | Twitter | Goodreads |