It gives me great pleasure to welcome the fabulous Ellie Campbell (aka Lorraine and Pam) to Bookaholic Confessions today. Ellie Campbell is a new author to me but I am massively excited about reading Million Dollar Question, which sounds amazing. I had a great time chatting to the two ladies behind Ellie Campbell and learning just how they go about the writing process and where the idea of a pseudonym originated from… 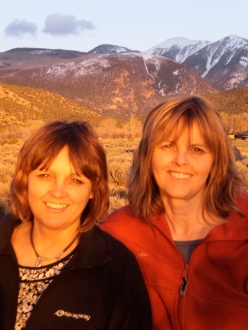 Hi Pam and Lorraine (aka Ellie Campbell!), a big warm welcome to Bookaholic Confessions! Thank you so much for participating in this interview. Would you like to start by introducing yourselves…?

Hi, I’m Lorraine, I’m the elder of the two sisters, and after years of wandering the world, footloose and free, I’ve somehow landed on a 10 acre ranch in beautiful Boulder, Colorado with my husband, horses, cats, dog, and chickens. I’m addicted to books and when not reading, writing or trail riding, I’m volunteer at my favourite horse rescue Zuma’s, working with abused horses or untouched mustangs, (two of whom I’ve ended up bringing home.)  Every day is an adventure and I feel incredibly lucky to be living my dream.

And I’m Pam, the baby of the family, although rumours of me being spoilt are greatly exaggerated. I moved from London to a small town in Surrey with my husband when my three children were small. I love the countryside and growing vegetables in our allotment (community garden). I still work part-time at a local college and at least once a year I am a reluctant participant of marathon fundraising bicycle rides across Europe on the back of my husband’s bone-shaking tandem, cycling to Paris, Gibraltar, Brussels, Barcelona, Montpelier, etc. braving mountain ranges and blazing sun, although to be honest I would just as soon be sitting on a beach or at home watching movies with a bar of chocolate and a bottle of wine.

Can you tell us a bit about your new novel, Million Dollar Question (released 25th April 2015)?

It’s a story of luck and coincidence (and of course money). Of our two heroines, one is a ruined by a scandal that takes her from wealth and privilege to broke and homeless. The other, a divorced mother pining for her ex, suddenly wins a million pounds and has to face the pitfalls that come with that. As the novel progresses, their paths entwine and it turns out they have A LOT in common. It’s possibly the most romantic of our novels and quite a bit of it takes place in London and the Isle of Skye, two of our favourite places.

You’ve written five fabulous novels together now and you must get asked this questions LOADS of times, so I apologise in advance! How does the writing process work between the two of you?

It does vary a bit with each book but usually we will thrash out the storyline and characters with phone calls and emails and then each picks chapters to work on. It’s easier with books like Million Dollar Question, which has two simultaneous stories. We send the pages to each other for editing and reworking and we end up with a master document going back and forth, getting changed along the way. (It has also happened that one of us gets a burst of creativity and has quite a bit of the novel written before the other comes in to strengthen the story and develop the characters further.) We add in humour or suggest twists, we come up with new ideas, clean up sentences, rewrite segments, and generally do anything we think might improve the book. The first draft is inevitably too long and we both cut like crazy, catching typos and mistakes along the way. There’s usually a few rewrites, then one of us does the final run-through before it goes to our proof-reader. We’re pretty well matched in all aspects, writing, ideas, characters, dialogue. And we go over the manuscript so much that our writing really gets blended. We do sound alike anyway and we share a similar sense of humour.  It’s like siblings telling stories of their childhood.  Sometimes it’s hard to remember who did what. 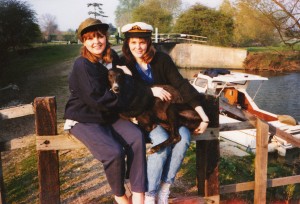 Do you always agree on storylines and character traits or do you ever have any disagreements?

Well, it’s not always easy writing together. You have to be flexible. Sometimes you have an unspoken idea of how a scene or character should progress and the way your partner writes it is completely different so you have to rearrange your thinking. That can be a good surprise or a not-so-good one. Sometimes you have a knee-jerk reaction against a new suggestion that veers dramatically from what’s been discussed or what you’ve envisaged. Neither of us will force an idea but we’ll sure as hell argue our point. Luckily, once we’ve had a chance to cool down and reflect, we almost always see the value in each other’s suggestions and realize what we’ve been arguing against is actually quite brilliant. It adds a bit of extra spice to the writing process. And we have a rule that if one of us hates something, it’s out. It’s a collaborative effort.  We both have to like everything and we both have to do what’s best for the book.

How did the idea come about for you to write novels together under a pseudonym?

We were each separately writing and selling our own short stories with a longer novel in the works. But one day when chatting, we discovered we both wanted to write a story about four sisters and use some of our own (shared) family experiences as inspiration. We were already giving each other feedback on a regular basis, helping out when one of us got stuck. So writing it together seemed logical, saved us fighting over who got to do it. And we felt it would be a fun project, which it was. Then we got a two book contract so we had to write a second one together. And here we are.

Do either of you think you’d ever write a novel alone?

It could happen. We’ve both written independently and we could do again, especially if one of us wanted to move on to a different genre or a very personal project. What the writing partnership gives us is encouragement and confidence and a helping hand when you’ve tied yourself into some corner and can’t see where to go next. It’s almost like having a creative editor looking over your shoulder. We both value each other’s opinions so even if we were writing our own novels, I think we might end up asking for feedback as we went along.

How do you go about doing the relevant research for your novels?

We write mostly from our own life experiences and knowledge, we talk to people, and then of course the internet has an amazing amount of information which we make full use of. We read a lot too although I can’t say we spend entire days in library – our books don’t usually demand it. Alas, so far we’ve never followed anyone like a cop or a fireman around for a day, absorbing their life style – I’ve a feeling even if we were writing about someone like that, we’d be too chicken to ask. We’re actually quite shy.

We’d each sold over 70 short stories before we wrote How To Survive Your Sisters. Lorraine had started selling them when working in publishing, in a literary agency then for Woman magazine. Then when she was backpacking in South America, Pam was at home with kids and for fun took a bunch of creative writing classes, then started submitting to magazines. When we wrote that first novel together, we sent it out to an agent, Caroline Hardman, who was just starting to build a client list. (We were her first clients.) We got a two book contract from Arrow Books, Random House, but when the economy started to affect publishing, we decided to go the indie route with our third novel Looking for La La. We were so green.  We had no idea of promotion, reviews, Facebook or Twitter – the Arrow publicist had handled everything. So we realized we had to learn fast if our books weren’t going to sink without a trace. We are still with our agent but we reverted the rights to our first two novels so we could self-publish globally.

Who are your favourite authors and what kind of books do you both enjoy reading?

We’re working on a third novel in the Crouch End Confidential series which started with Looking For La La and followed on with To Catch A Creeper. The books could best be described as chicklit mysteries with Cathy, our crazy housewife and wanna-be sleuth, getting herself into all kinds of tangled situations, both domestic and more dangerous as well.   We keep writing about her because she’s so much fun.

A huge thank you to Pam and Lorraine for taking part in this interview. ♥