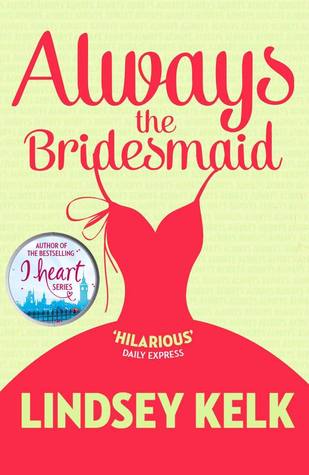 Maddie Fraser has never been anything other than the girl in the background: golden boy Dan’s little sister, crazy Shona’s minion, workaholic Sebastian’s ex and now she’s also the girl in the middle of her warring best friends.

Lauren has announced she’s getting married – just as Sarah’s husband asks her for a divorce. Nothing in Maddie’s career in event organising has prepared her for this particular combo of planning and real pain. The news that her ex is also tying the knot is the final straw. While the magazines say she should be leaning in, all she wants to do is sleep in. But whether she likes it or not, everything is about to change for Maddie. For better or worse, this grown-up bridesmaid is taking centre stage…

When you’re about to dive into a Lindsey Kelk novel, two things are guaranteed. 1) You’re going to be laughing-out-loud/sniggering/attractively snorting/hiccuping with laughter and 2) You are going to absolutely love every minute of it.
As a mahhhooosive fan of Lindsey’s I was like a kid at Christmas when I got my bookish mitts on Always the Bridesmaid which charts lead character Maddie’s disastrous run up to being a bridesmaid at her best friend Lauren’s wedding. What’s so bad about that? I hear you ask. WELL. Maddie’s other best friend Sarah is about to become a DIVORCEE, Maddie is currently grappling with the news that her ex is now a dad and there is now a mini-Seb inhabiting the world, she is treated appallingly by her boss in her events planning job and is desperately seeking a promotion. Oh, and Lauren thinks she can treat Maddie as an unpaid wedding planner  because it’s what she does in her day job.What could possibly go wrong!? Only everything…

Firstly I need to get my adoration of Maddie out of the way. I don’t know how Lindsey Kelk does it but she always, always creates such loveable, strong, realistic heroines that you desperately want to be friends with. I’ve often come across novels where I feel as though I can really relate to the lead character but this was amplified by hundreds of thousands with Maddie. You can’t not like her. She loves pizza, wears inappropriate clothing and is rather clumsy. She is also one of the most caring, kind and generous characters I’ve ever come across. It really made me mad when people took advantage of her. Do they not realise how lucky they are to have such a lovely friend/partner/employee/sister/daughter? Jeez. She is the kind of character that will remind you of yourself in so many ways too (maybe even a little too much at points…)
I also loved the dynamics of the friendship group between Maddie, Sarah and Lauren. When these three get together it literally feels as though it’s you settling down with an alcoholic beverage and a slice of pizza or two whilst having a good old gossip with your friends. Like any group of friends they are constantly analysing their relationships, careers and fashion sense and it makes for such fun, carefree, enjoyable reading. I loved all three of the girls (even Lauren when she had her ‘Bridezilla’ moments…of which there are many…)
I felt that the plot was especially strong in Always the Bridesmaid, not least because you have quite a few stories running nicely alongside each other. You can see how things are possibly going to play out but you can’t quite get to grips with the way in which they happen. When you’ve finished and you look back it’s one of those stories that’ll make you go ‘Ahhhh, I should have known that all along…’ with a big cheesy grin on your face.
I love how the story is told in the format of Maddie’s Bridesmaid Diary. (She has to write how she feels and what she is thankful for on each day….)I love the entries at the start of each chapter and I felt they helped to put forward Maddie’s sparkling personality a lot quicker than if we had just got to know her purely through the happenings of the story. This was such a nice touch and I feel it worked really well.

Now comes the point in my review where I endlessly gush about Lindsey’s fabulous style of writing. I just love, love, LOVE everything about it. Her writing has such a witty turn of phrase and she can make the most mundane of things funny (which I believe is no easy skill) Her observations of everyday life, relationships and being a woman are spot on. Lindsey basically writes how most women think…Aside from creating the most believeable and realistic characters, Lindsey also doesn’t scrimp on the drama, the luurrrving, the catastrophes and the heart wrenching moments in her books and Always the Bridesmaid follows in the footsteps of her previous novels perfectly.

A huge thank you to Amy, Deborah and Rosie and HarperCollins for sending me a review copy of Always the Bridesmaid.♥

Lindsey Kelk is a writer, beauty blogger, karaoke fan and not-so-secret pro-wrestling fan. She currently lives in New York, trying to get around in shoes she can’t really walk in.

7 thoughts on “Book Review: Always the Bridesmaid by Lindsey Kelk”