‘Those Terrible Teens’ by Ravinder Randhawa

‘When I was a teenager  …’ carries a multitude of meanings from one family to another,  from one culture to another, from one generation to another. It appears to mean the same thing and yet, examined more closely, it’s often a revelation of difficulty, misunderstanding, incomprehension, demands and rebellion against demands. In some cultures it’s the imposition of restrictions and duties, particularly on girls; in other cultures it’s the requirement to have ‘fun’ – an idea which doesn’t always deliver what it’s supposed to and can often cause more unhappiness than happiness. In most cultures, the world is a difficult place: at its worst it’s a ‘jungle’, where survival is hard and has to be fought for, at its best it’s the ‘oyster’ where dreams can come true. Whichever it is, the teenage years are the years when reality begins to bite and the future begins to make demands.

If childhood years are the wonder years, a time of learning about the world, being amazed and astonished by it; a time of growing and mastering the demands of early education, the rules and regulations of everyday living, family relationships and the wider social world – then the teenage years, think teenagers from many different backgrounds, must be the flying years. When wings are unfolded and stretched, when apron strings are untied and left behind, when the world is experienced without the protective buffer of parents and family. When learning is ‘immersive’, when risks are taken and new horizons explored. When life, finally begins. As if the teenage life is a package, which can be unwrapped and stepped into. This romanticised idea of teenage life is beloved of teenagers across the world, but it’s certainly not true for the majority, if anyone at all, and if it were, what purpose would it serve?

Being a teenager, in any culture can be difficult, confusing and often frightening. A sentence that’s full of all the clichés. But clichés often carry a lot of truth. Just as childhood is the time of questions, so are the teenage years. The difference is that childhood questions are often about ‘what?’ and ‘why?’ the naming and explaining of things. The questions in teenage years may also be ‘what?’ and ‘why?’ but are of an entirely different nature, their thrust is  individual, social or existential. When ‘I want…’ seems to be a definition of self; when society’s contradictions, injustices or problems are experienced; when  the ‘Who am I?’ ‘What am I?’ become questions that are important and may have consequences.

These teenage questions, difficulties and confusions are the pathways to becoming an adult, and an adult human being is a very complex creature.

An adult human is required to be knowledgeable, skilled, socially adept, emotionally mature, responsible and trustworthy; a law-abiding citizen, an individual and a parent, a transmitter of culture and religion; a perceptive decision maker and a wise elder; strong enough to endure hardship and misfortune, grief and tragedy; selfless enough to put aside personal needs when necessary and look after others; to provide for the present and to plan for the future – to name but a few of the qualities needed to be a fully functioning adult in a world that’s  unpredictable, arbitrary and dangerous, but also carrying opportunity and promise. A world where accidents happen in a split-second, where death can swoop at any time and where other human beings can often take advantage, deceive or betray. Where hearts can be broken and lives damaged. But also a world where ambitions can be pursued, where there is love, decency and idealism, help and comfort; where circumstances can be changed and dreams can be pursued.

The teenage years are difficult, confusing and overwhelming precisely because the world is difficult, confusing and overwhelming. If the teenager can begin to navigate the choppy waters of the world, ask questions about society, culture, responsibility, morality, God and existence, and accept that most of the time, the answers have to be worked out, often the answers come as a compromise, and sometimes there are no answers – except to do the best, respect others, have self-respect and be happy, then the agonies of the teenage years will have achieved the complex human being who can navigate the world and contribute to it.

Ravinder Randhawa is the acclaimed author of the novels Beauty and the Beast (YA), A Wicked Old Woman, The Tiger’s Smile and the short story collection Dynamite. She’s currently working on a trilogy: The Fire-Magician. Ravinder was a Royal Literary Fund Fellow at Toynbee Hall, Queen Mary’s University, the University of London, and founded the Asian Women Writer’s Collective.

Ravinder was born in India, grew up in leafy Warwickshire, now lives in London and agrees with Samuel Johnson’s saying (though of course, in a gender non-specific way) ‘…if a man is tired of London, he is tired of life.’  Loves good coffee and really good thrillers.

To be in with a chance of winning 1 of 3 paperback copies of Ravinder’s novel, Dynamite, click the link to be taken to the Rafflecopter draw. Good Luck! 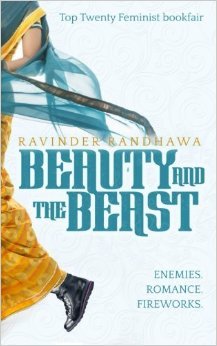 Beauty and the Beast

‘Problems? Confusions? Contradictions? I got them all and if you’ve got them, then FLAUNT them is my motto.’ Meet Harjinder (aka Hari-jan): ‘A’ level student, supermarket worker and desperate journalist. Feisty and impulsive, Hari-jan can’t refuse a dare and to make matters worse has fallen in love with the wrong boy.
Her best friend Ghazala has taken to wearing the hijab and mentoring racists.
Can Hari-jan battle through the hurdles and win her man?
Can Ghazala work out how to do Good in her own way?
A sparkling, coming-of-age novel about life, love and friendship.

Title: Beauty and the Beast 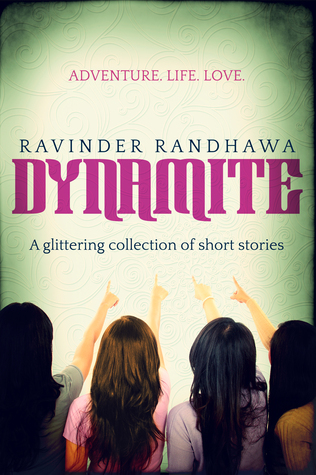 Collection of short stories: Fun, feisty, tender and wry. Full of imagination and originality, stories of innocence and experience, British-Asianess and life’s haunting complexity. From kick-ass heroines to mysterious spacecraft; the heartache of first love to the inheritance of history; the echo of distant war zones to treacherous boyfriends; riots and violent murder.

4 thoughts on “Guest Post: Those Terrible Teens by Ravinder Randhawa”