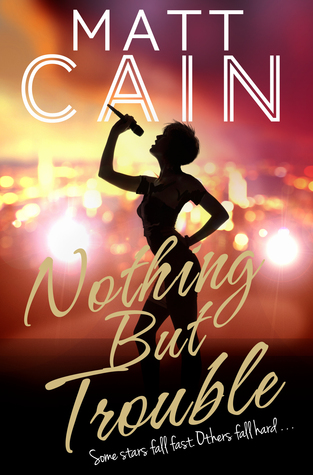 Lola Grant is the hottest pop star in Britain and she’s about to go global. But behind the music, her addiction to bad boys is taking her personal life in a dangerous direction. When it comes to men, Lola just can’t stay away from trouble – and her self-control is pushed to the limit when she meets her handsome new drummer Jake Hunter.
Looking out for Lola is her best friend and manager Harvey Sparks. But Harvey’s fighting his own demons and can only watch from the sidelines as the star he helped create begins to fall. When Lola seeks comfort in a life of wild partying, she meets good-hearted showbiz reporter Freddy Jones, a man who may just be able to offer her a way out.
But as she starts rehearsals for her Trouble tour, Lola finds herself faced with an even bigger threat. And unless someone can get through to her before opening night, she’s in danger of losing everything she fought so hard for – in full view of the whole world.

In Matt Cain’s sparkling page-turner of a novel we are given a gloriously juicy insight into the behind-the-scenes workings of the music business.
We meet hugely successful pop star Lola Grant who is preparing to embark on a massive tour. Lola is working hard trying to promote her latest album and things seem to be going well…however like many famous music stars she has an addiction. However, it’s not drugs, alcohol or spending money that is Lola’s downfall…its bad boys.
As if by perfect coincidence Lola then meets Jake, her new drummer and the stereotypical bad boy. Can Lola resist or will she end up risking more than just her career?
We also get to meet Lola’s manager/best friend Harvey and showbiz reporter Freddy along the way who both have stories of their own to tell.
The phrase Sex, Drugs and Rock and Roll has never been more apt..

Nothing But Trouble is the ULTIMATE rollercoaster of a novel, with twists, turns, secrets and juicy revelations a-plenty and I simply could not get enough of this story.

Things start off gently and ease you into proceedings nicely, but it’s not long before you’ll completely lose yourself in this novel. It’s no exaggeration to say that there literally is NEVER a dull moment. The thing that I loved most is how you’ve got so many things going on within the storyline. As well as Lola’s pop star fame and fortune and all the fun that comes with that, you have the aherm, shall we say ‘escapades’ of Jake’s, there’s Harvey and his desperate attempt to keep Lola out of trouble, there’s Freddy who is meant to ‘dish the dirt’ on Lola being a showbiz reporter – the only trouble is he actually likes her. A lot. Then you factor in Lola’s past – she has not always led the glittering life that she leads today and has had a difficult upbringing. I found her to be such a complex character and she was fascinating to read about. It’s clear that the events of her past have shaped her into the person she is now and I completely loved her. In fact, I loved all the characters in their own way (maybe apart from Jake…) Matt managed to make them both completely outrageous, flawed and still quite believable at the same time.
The plot line was strong, unpredictable and full of excitement. It made me laugh, cringe, and gasp in horror – in other words it was perfect. Any novel that can evoke such strong reactions from a reader is a winner in my eyes and I loved every scandalous page.

Matt’s writing is just fabulous. The way in which he weaves everyone’s stories together is done with ease and he has such a fun style of writing. It’ll make you giggle and possibly snort at the same time. I love how he portrays the life of a star – simply putting across the message that it’s all well and good being famous but it usually comes at a price.

Nothing But Trouble is scandalous, glamorous and an absolute must-read for summer 2015.

A huge thank you to Lucie at Pan Macmillan for sending me a review copy of Nothing But Trouble. ♥

Matt Cain was born in Bury and brought up in Bolton.

He spent ten years making arts and entertainment programmes for ITV, including documentaries about Ian McKellen, Sam Taylor-Johnson, Will Young and Carol Ann Duffy for The South Bank Show.

In July 2010, Matt stepped in front of the camera to become Channel 4 News’ first ever Culture Editor, a role in which he attracted acclaim for his coverage of the Women’s Prize for Fiction, the Mercury Music Prize and the Turner Prize, as well as interviews with Grayson Perry, the Spice Girls, Pedro Almodóvar and Emeli Sandé, and an exclusive look inside Lucian Freud’s studio following the artist’s death.

In July 2013, Matt left Channel 4 News to become a full-time writer. His first novel, Shot Through the Heart, was published by Pan Macmillan in April 2014. The second, Nothing but Trouble, is due in July 2015. He’s currently working on the third, for publication in 2016.

Matt has been nominated for Stonewall’s Writer of the Year award, presented the series What Makes a Masterpiece? for More4, written articles for The Times, The Independent, The Daily Mail and The Daily Express, and continues to contribute a monthly column on gay cultural history to Attitude magazine. He was a judge for the 2013 Costa Book Awards and the Polari First Novel Prize 2014 and continues to judge the South Bank Show Awards.

He lives in London.