I am super excited to welcome the fabulous Josephine Moon to Bookaholic Confessions today. Josephine’s second novel, The Chocolate Apothecary has just been released in paperback (click here to get your copy) and it sounds amazing. Josephine’s debut novel, The Tea Chest was (in my humble opinion) even BETTER than chocolate cake, so of course I had lots of questions which mostly revolved around writing and eating…

Hi Josephine, welcome to Bookaholic Confessions! I’m thrilled to have you on the site, thank you so much for participating in this interview. Would you like to start by introducing yourself…?

Thank you so much for having me along; it’s a great pleasure 🙂

I live with my husband and young son on acreage on the Sunshine Coast in Queensland, Australia, and write contemporary women’s fiction with stories based around food. I LOVE FOOD! And I love to write about food too; it’s a perfect combination for me.

We have seven horses (most of whom are rescues… I can’t say no), two goats (goats are hilarious, by the way… they’ll drive you crazy and melt your heart at the same time), three cats and two dogs. I’m half an hour from the beach as well, so I think I have the best of all worlds.

It was my dream for so long to be a career writer and I feel immeasurably lucky and grateful that I’m finally here.

Can you tell us a bit about your new latest novel, The Chocolate Apothecary (paperback released 2nd July 2015 by Allen and Unwin)?

The Chocolate Apothecary is a love story with chocolate! Here’s the official blurb:

Christmas Livingstone has 10 rules for happiness, the most important of which is ‘absolutely no romantic relationships’.

In The Chocolate Apothecary, her enchanting artisan store in Tasmania, she tempers chocolate and creates handmade delicacies. Surrounded by gifts for the senses, in this shop chocolate isn’t just good for you, it’s medicine.

Set across Tasmania, Paris and Provence, this is a glorious novel of a creative woman about to find out how far in life a list of rules will take her, with an enticing tangle of freshly picked herbs, pots of flowers and lashings of chocolate scenting the air.

I am extremely excited about reading The Chocolate Apothecary; I just love the idea of a shop that helps to promote the potential medicinal uses of chocolate! What inspired you to come up with the idea behind the storyline?

At first it started with a love of chocolate, and I came up with the idea of a ‘professional fairy godmother’ quite early on, who went around making people’s lives better. So it was that, combined with my studies into herbs and aromatherapy, that naturally lead to the concept of medicinal chocolate–chocolate that could heal people and taste wonderful at the same time. And, honestly, who wouldn’t want to eat chocolate as medicine? 😉

Is lead character Christmas Livingstone (who incidentally has the coolest name ever!) completely fictional or is she based on anyone in real life?

She is 100% fictional! In fact, she is the third version of the main character for this book and definitely the best one 🙂

How long did The Chocolate Apothecary take you to write?

It took about two years and came together quite messily over a long period of time (and partly that was because I was writing it with a newborn and the sleep deprivation was killing me). I was 75,000 words into the book (about 3/4 of the way) and still didn’t really know what it was about. At the end of that first draft, I realised it was a love story and that made it much clearer how to rewrite and redraft from there. It kept developing and maturing and I’m really thrilled with how it all came together. It’s one of the most amazing things about writing a book: it becomes this living thing and has an energy all of its own.

Your debut novel, The Tea Chest, has been a huge success and received some amazing 5* reviews. How does it feel to hear that readers have enjoyed your book so much?

It is truly amazing. I’ve had people tell me that they hadn’t read a book since leaving high school and The Tea Chest was the first one they picked up and now they are thrilled to keep reading again. I’ve had lots of people tell me how grateful they were to have a positive, joyful novel to read to counteract all the bleakness in the world (yay!). And most recently, I had a message from the sister of a young woman who passed away contact me to say they’d found notes in her sister’s journal about how she wanted to open a store just like The Tea Chest. There really aren’t enough words to describe my feelings about that. As an artist, you just hope someone will actually like your book, but to have people describe how deeply it’s touched them is an utter gift. I’m very grateful and I hope I get to keep doing it forever and ever. 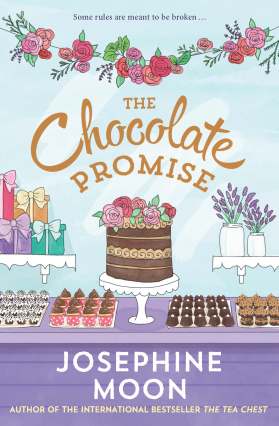 Can you tell us a bit about your publication journey?

In summary: twelve years, ten manuscripts, countless rejections, a lot of tears, some good friends, many workshops and courses, some notable shortlistings and competition wins, and adventures into self-publishing.

Then, a very lucky break—Monica McInerney passed my manuscript for the The Tea Chest to her agent, Fiona Inglis of Curtis Brown Australia, who then became my agent and it was a pretty swift move to a contract from there.

You describe your wonderful novels as ‘books like brownies’ but what would you say is your favourite indulgent treat?

Hmm… tough one! I’m going to go old school here and say trifle! I’m gluten free, so I need to make them myself from scratch, and I tend to only make one about once a year. It takes ages, contains way too much sugar, but definitely has a huge emotional connection to Christmas and family.

Other than that, I’d have to say lemon meringue pie (made myself, of course). It also takes a long time to make from scratch. (I’m starting to think there might be something in the amount of time it takes to make equalling the reward at the end.)

I should stop now…

I read a lot of contemporary women’s fiction, which is why I write it. (That sounds obvious but it took me twelve years to realise that if I was reading women’s fic then maybe I should be writing it!) I tend to read books set from 1900 onwards and I am well and truly over reading anything ‘gritty’ or ‘worthy’ or that distresses me in any way. I avoid violence or trauma. That’s not to say I don’t like complex, thought-provoking situations. I do. And I think I write the same way. My books are often described as light reads and they can definitely be read that way, but I think there’s a real emotional depth to my characters’ stories and I do get a lot of feedback from people who say the stories challenged them in unexpected ways and really made them evaluate things in their life. It’s always nice to know that the books are being read on lots of different levels.

I tend to read a lot of Australian, UK and Irish writers of women’s contemporary fiction. Too many to name!

Currently, it’s winter in Australia so I am spending a lot of time experimenting with hot chocolate recipes and tasting them in my kitchen. (I actually made a wee video about that if you’d like to see it.) Other than that, I’m working on my third novel, which will be out this time next year, researching my fourth novel, and loving my little three-year-old boy.

A huge thank you to Josephine for taking the time to answer my questions. ♥

Don’t forget to get hold of your copy of The Chocolate Apothecary NOW.