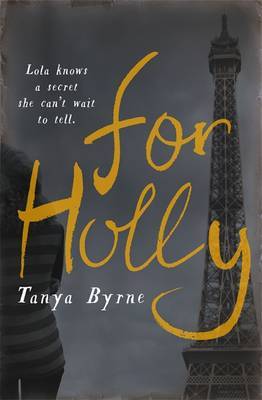 Lola Durand can’t get through to her father. He never wants to talk about the things that matter: why they had to move to Paris, why he had to marry evil Agatha, and how they can get through the heartache of her mother’s death together.

If he won’t listen, she’ll show him. She’ll show him the truth about his new wife and then her life can go back to normal, just the way she likes it.

Lola Durand knows a secret about her stepmother. She’s going to share it.

Teenager Lola Durand is going through a really tough time. Still struggling to come to terms with the death of her mother and the inexplicable way that her father has moved on so quickly, Lola is forced to spend the summer in Paris with her father and her awful new stepmother, Agatha.
Lola is quickly going off the rails – stealing, drinking and struggling at school. So much so that Lola’s father thinks she would be better off staying with him and the evil Agatha in Paris. This is the last thing that Lola wants, especially as it would mean leaving her boyfriend, Pan, back in England.
However, a shocking series of events are about the occur, all sparked off by Lola’s hatred of Agatha and her determination to reveal a secret that’s set to blow everyone’s worlds apart…

Lola is our narrator throughout the story but she’s not just telling any old story. She’s addressing the story to ‘Holly’ in the form of writing everything down in a notebook. It’s unclear as to why exactly, or who Holly even is, but it is clear that something shocking has happened as Lola attempts to justify why she did what she did.

I was hugely excited about this novel and not just because of the extremely fantastic title (!) Tanya Byrne is an author who is new to me but she is someone who I have heard many great things about. I also loved the premise of the story – Just who is Holly? What has Lola done that is so terrible? What is Agatha’s secret?
It took me a while to get into this novel and I’ll admit to feeling a bit lost to start off with. It takes a while for things to slot into place and to get your head around the way in which Lola is telling the story as she’s not actually addressing you, the reader, but the elusive character of Holly.
The other thing I struggled with as a total French-novice was the language. The novel is set in Paris so naturally people are going to be speaking French, but sometimes I found the dialogue confusing as it wasn’t always translated. However this was only something minor, especially once the story really kicked off and I became transfixed (and let’s face it – there’s always Google Translate!)
I loved the setting of Paris – Tanya really brought the city to life for me and I loved how we were shown the contrast between the boiling, bustling streets of Paris in summertime, compared to Lola’s life in London.
As soon as things started to click into place I was engrossed in For Holly. Tanya Byrne builds the tension so well and is brilliant at not giving anything away. Once I had caught up with what was going on I absolutely loved this story.
Lola is an extremely well drawn character and her grief and anger radiates off the page. You can completely feel her frustrations and understand her dislike towards Agatha. However, you know there has to be more than first meets the eye with ice-queen Agatha. But what?
I absolutely LOVED the ending and feel the whole story was executed perfectly. It is packed full of shocking revelations, emotion, drama and intrigue.
Surprising and extremely engaging – For Holly is definitely a must-read for YA fans. I’m also really pleased it’s opened my eyes to Tanya Byrne’s writing – I will definitely be reading her other books.

A huge thank you to Frances at Headline for sending me a copy of For Holly to read and review. ♥

Tanya was born in London where she still lives with her cat who goes by several names, none of which he actually answers to. After eight years working for BBC Radio, she left to write her debut novel, Heart-Shaped Bruise, which is out in May. She has a weakness for boys with guitars, drinks far too much tea and even though her mother tells her not to, she always talks to strangers.