Hello Colette, welcome to Bookaholic Confessions! I’m thrilled to have you on the site, thank you so much for participating in this interview. Would you like to start by introducing yourself…?

Hello Holly, firstly I would like to thank you for inviting me to this interview on your blog.  I’m a married dog lover who, some years ago was a legal secretary (much like GiGi, though I was made redundant), but have turned away from the rat race and become an author instead, which I have to say I love, as I set my own pace, though there is far more involved than just the writing as there is also an awful lot of marketing involved, being self-published.  Oh, and just like you Holly, I have a particular love of that all important shopping element, to the point of being somewhat of a hoarder, as my husband would say.  I’m also a bit quirky, much like my books, at least in the way I dress on occasion.  As someone who left school with just one “O” Level and three rather low grade CSEs I consider myself lucky to be able to write.  I did, however, attend college following that and undertook a secretarial course, which I passed quite well.   Considering I hate exams (don’t most people) and became a bag of nerves during those times….I didn’t do too badly.

Can you tell us a bit about your new novella, The Retail Therapist? (Released 23rd June 2015)?

After writing Blue and Green Should Never Be Seen! (Or so Mother Says) I wanted to allow my readers a little more insight into both Gigi and Ritchie as characters, as well as having more of a story to tell.  The Retail Therapist is the prequel to my first novel and although it is a novella, it does stand on it’s own two feet, so to speak.  The story unfolds of the birthing of GiGi’s personal shopping business and brings humour, friendship and love too.   It may be set in a region that is more affluent than some, but that should not detract from the story itself. 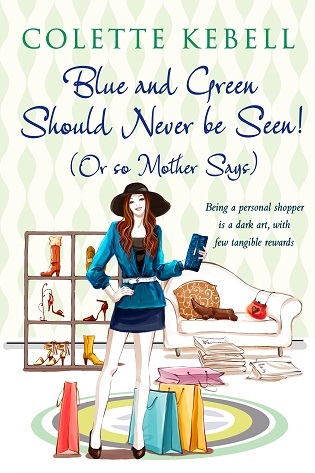 As you know I loved both Blue and Green Should Never Be Seen (Or So Mother Says) and The Retail Therapist. What inspired you to tell GiGi’s story?

Inspiration comes from many places, Holly.  I wrote my first book (which I may revisit some time) about 13 years or so ago.  That was closely followed by the beginnings of another, which I also haven’t done anything with as of yet.  I then had a long period where I was just part of that rat race called work and just didn’t have the time or the inclination to write during that period.  I met and married my husband and I had all but forgotten writing, then by chance, I came across a fellow author, Donna McDonald and started reading her books.  After that we became friends and I discovered the route to market of self-publishing.  I was then off and running and buzzing with ideas, though had a gentle push in that direction from my husband as well who was there with plenty of support and encouragement.  A love of shopping, as mentioned above, was something I was keen to tell a story about and so the character of GiGi came about.  Other than that, I guess I was frustrated by wanting to do something new myself but lacking in the funds to do so.

Is GiGi completely fictional or is she based on anyone in real life? Are there any similarities between yourself and GiGi?

GiGi is a fictional character, though she may slightly be based on elements of myself or indeed my husband for that matter.

Did you prefer writing a full length novel or trying your hand at a novella?

I enjoyed writing both, though what I found quite hard was knowing when to stop writing as far as the novella was concerned.  I could have added a whole lot more to that story, but, enough is enough some times….  That doesn’t mean to say that I may not revisit that part of GiGi’s life though in subsequent books.  That you are just going to have to wait to discover. 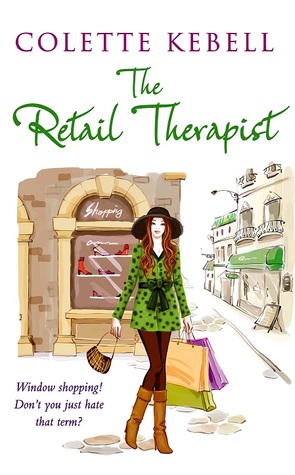 Your first novel has had some fantastic 5 star reviews. How does it feel when you hear how much readers have enjoyed your book?

Funnily enough, and I doubt that I am the only author who has had this reaction to reading the reviews of their books, but most if not all brought me to tears.  After all the effort of the writing process to then see how well received my book was/is by readers gives such a sense of achievement and also some pride.

As you probably know I am a sucker of a nice pair of shoes. What is your shopping vice?

Oh Holly, I probably have too many shopping vices to mention.  I have a vast amount of pairs of shoes and four double wardrobes full of clothes……but then, when I’m in cooking mode, I turn to food and like to try new recipes, or if I’m decorating I like to shop housewares !!  Do you recognise any more GiGi traits yet?….

Do you have any tips for aspiring authors out there?

Read. Reading is the most fundamental element for a writer. The second is reading a lot. There is so much that can be learned by seeing how a character is developed, how it might interact with others, what is the right amount of description to use and so on.

If you have a story to tell, write it down and do not give up. I personally have a general idea of where I’m going, but sometimes characters take on a life of their own and the story might change. That happened in Blue and Green.  Don’t force your characters down a particular path, they might not like it. Very few people have the talent to write an excellent story the first time. Writing needs exercise, like sport. Dedicate a certain amount of time to this passion, even a few hours a week, and do not get tangled in the day to day routine. If you go to the gym, you plan to stay there for an hour at least, do the same is with your passion, writing.  The more you write, the more you find out what works and what doesn’t.

Read some books on how to write. You don’t have to accept all of what they are saying, but you can avoid basic mistakes. There is a chance people might not like what you have written or not buy your book altogether. Don’t give up and instead get some feedback that might help you. Writing is difficult, it takes time. You have to have the motivation to spend a lot of time thinking about fictional characters rather than real ones.  And when you have finished your book, get some beta readers for feedback, and a decent copy editor. You will not believe how helpful they can be.  Then of course there is the cover.  I was fortunate that I was introduced to Lizzie Gardiner, the sister-in-law of a friend of mine.  Her cover designs are quirky and adorable and I love them to bits.
Who are your favourite authors and which genres of books do you like reading?
Like you I enjoy reading Sophie Kinsella’s books, though those are not the only ones that I enjoy.  I also enjoy reading books of a more adult nature, such as Donna McDonald’s books as mentioned above.  I have read almost all of Donna’s books and I’m not just being biased as she has become an author friend.  I do, at least these days, prefer Chicklit/Romcom or contemporary female literature.  Having said that I also thoroughly enjoyed reading the likes of the Harry Potter and Percy Jackson stories, so I’m not tied to any particular genre, though I am no longer a fan of horror, which I was in my younger years….More recently I came across Emma Davies who wrote “Letting in Light” and Pippa Franks who wrote “The OMG Test”, both of which I enjoyed and were, at least at the time I came across them, debut self-published authors as well.

Currently Holly, as you already know, I am in the process of launching the paperback of “The Retail Therapist”.  Which you have had some involvement in due to your lovely review and have now seen a photograph of the back cover of the proof copy of that.   That launch is probably still a couple of weeks away and then the marketing element kicks in.  I have started a sequel but that is a bit of a ways off.  On another front, I shall be talking about my books at the Folkestone Book Festival on 22nd November 2015 and so have that to prepare for.  Busy times I guess, but enjoyable ones.  Other than that, our house is currently on the market and so preparing for viewings takes up quite a bit of time on occasions.

A huge thank you to Colette. ♥

Don’t forget to get hold of your copy of the fabulous Blue and Green Should Never Be Seen (Or So Mother Says) and The Retail Therapist.