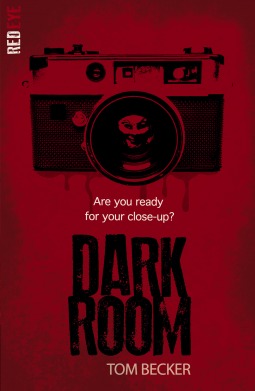 When Darla and her feckless dad, Hopper, move to Saffron Hills, Darla hopes it’ll be a new start for the both of them. But she stands no chance of fitting in with the image-obsessed in-crowd at her new school. Then one of her classmates is brutally killed when taking a photo of herself. A murder Darla herself predicted in a bloody vision. When more teens die in a similar fashion it appears that a serial killer is on the loose – the ‘Selfie Slayer’. Darla alone is convinced that the murderer might not be flesh and blood…

When Darla O’Neill and her father Hopper are forced to flee from the trailer park they currently call home, they find themselves in the picturesque town of Saffron Hills. Darla’s mother, Sidney, committed suicide when Darla was younger and her upbringing with her unreliable alcoholic father hasn’t been easy.
Hopper is intent on their move to Saffron Hills being a fresh start for the pair, but Darla isn’t so sure – especially when she starts her new school. Filled with rich, perfect-looking teenagers who are obsessed with looks, money, status and selfies. Darla flounders. But then she meets Sasha and Frank who take Darla under their wings and protect her from the ‘Picture Perfects’.
However, it’s not long before some horrific things start happening when the rich and beautiful teenagers start being brutally murdered one by one.
As if this isn’t scary enough, Darla well and truly freaks herself out when she starts getting premonitions of the deaths and who is about to fall victim to the ‘Angel Taker’ next.
When she confides in her friends about her terrifying visions they know that they have to do all that they can to discover who is behind these gruesome deaths. Click.

Dark Room is one of those stories that I just knew was going to be amazing. Sometimes you can just tell by the synopsis alone when a story is going to completely consume you and be impossible to put down and that was Dark Room through and through. Creepy, tense and down-right gruesome. Needless to say – I loved it.
The plot is such a fantastic idea, especially in the selfie-obsessed world that we are living in at the moment. The way that photography was linked in to this story was done brilliantly and it added to the spookiness no end, especially where Darla’s visions were concerned. The image of a photograph being developed in a creepy dark room somewhere to reveal – gasp- a dead body! ARGH. The frustrating thing was that Darla could only see through the murderers eyes, meaning it was never clear who exactly the elusive person was.
The whole set-up and range of characters was also done brilliantly. I loved to hate the ‘Picture Perfects’ (think The Plastics from Mean Girls) They are the kind of characters who you just KNOW something is going to happen to…But what!? And when!? THE TENSION!
The way in which the story is written is fantastic. Our main narrator is Darla; a really strong character who you’ll quickly warm to. She’s sensible and ultimately very real. I liked how she was far from perfect and she stood up herself and fought for what she thought was right. However, the narration changes every now and then so that we get to hear the viewpoint from the character who is about to be murdered. This was hugely effective and I liked how we got that slight insight into their thoughts, rather than just conjuring up an image of them from what we hear through Darla.
I absolutely loved Sasha. Strong willed and outspoken I wasn’t sure as to whether I was going to like her at first, but her snarky attitude and outrageousness quickly won me round. She will definitely make you smile (and gasp…) if nothing else.
Dark Room isn’t just a blood-fest – far from it. You’ve got other important themes running throughout the book that are just as important as all the spooky stuff. There’s friendship, family, relationships and the danger of keeping secrets…
Dark Room is extremely scary. It’s also gory and immensely chilling. I don’t recommend reading this book late at night in a house on your own because it most probably will either a) keep you awake out of fear or b) keep you awake because you can’t stop reading. Either way sleep will not be an option.
Seriously spooky and full of twists, Tom Becker has created a brilliantly plotted, stomach-churningly good horror story in Dark Room.  You will be shocked, scared and seriously freaked out whilst reading this book. The murders are well spaced out, allowing plenty of time of the tension to increase. You’ll also be scrabbling at the pages to get to the bottom of these murders, I can guarantee. I also found myself on the very, VERY edge of my seat at various points throughout the story.

I’m not a big reader of horror but the YA Red Eye series from Stripes Publishing has really opened my eyes to the genre because I have loved every single book in the series. I really hope that more are released because who doesn’t love a good old spook-fest?

A huge thank you to Stripes Publishing. ♥

Since Tom Becker learned to hold a pen, he wanted to become a writer. In fact, when he was 5 years old, he wrote in a notebook that it was his dream was to be an author. Aged 25, Tom has realised that dream with publication of his first novel, Darkside in January 2007.

Tom’s early enthusiasm for books and reading was encouraged by his parents who were voracious readers. Their family home was cluttered with bookcases and piles of novels. Tom spent most of his childhood curled up in an armchair reading fantasy novels by Brian Jacques, and later graduated to grown-up novels by David Eddings and Guy Gavriel Kay.

Tom studied History at Oxford University and was struck by the otherworld-ly atmosphere of this academic institution. He used to spend long days studying and reading in the University library and always felt intrigued by the atmosphere there – perhaps that is why a library is such an important setting in Darkside.

Tom started writing Darkside in 2005, it took him three months to complete and he is now working on more books in the series. He drew inspiration from film noirs such as The Asphalt Jungle and The Big Sleep (hence the glasshouse scene in Darkside), and comicbook writers such as Alan Moore.

Aside from reading, Tom’s big love in life is music. He is still reeling from the break-up of his two favourite bands, Rocket From the Crypt and Sleater-Kinney. Tom’s other passions include supporting Everton Football Club and consisting on a diet of fry-ups and fish fingers!