I am thrilled to welcome the fantastic singer/songwriter (and now author!) Tallia Storm to my blog today. Tallia has just released her debut novel, Pop Girl with Scholastic and it’s one I am hugely looking forward to reading. Click here to get hold of your copy. It was fantastic to be given the opportunity to chat with Tallia and find out a bit more about why she has decided to turn her hand to writing…

Hi Tallia, welcome to Bookaholic Confessions! I’m thrilled to have you on the site, thank you so much for participating in this interview. Would you like to start by introducing yourself…?

“Hey, thanks so much for having me – I’m Tallia Storm, I’m a singer with a passion for writing, fashion and doughnuts!

Can you tell us a bit about your debut novel, Pop Girl (released 1st October 2015 with Scholastic)?

If I had to think of one line to describe it, I would say it has one simple message; ‘Don’t dream it, storm it, giving up is NOT an option!’

I think Pop Girl is kinda like a teen flick – think Gossip Girl meets High School Musical and you’re in the story!

Storm Hall, the main character in the book,  is obsessed with singing (yes see the parallels here…Storm Hall – Tallia Storm lol) First off she misses a national singing competition to go on a family holiday, then her best pal nicks her spot in the competition – can you imagine the cheek of it? So off she goes to Hawaii – the island  paradise and meets this cool teen band – they lost their lead singer and Storm steps up to the challenge – course there are the classic wee teenage love drama’s in there too. Anyway, next day she hear’s the song on the radio and guess what – its her voice but another girl gets the credit – arghhh can you imagine? But she doesn’t give up and you’ll have to buy the book to find out what happens next.

I love Storm because like all of us, she has flaws. I think the writing is frank and honest, Storm Hall learns a lot in story, she messes up and she deals with it –  like all us teenagers. Life is rollercoaster – you just have to jump on it and see where it takes you.

As a hugely successful singer, songwriter and model, what made you decide to try your hand at writing fiction?

Gosh what an intro – well first off I’m definitely not a model – apart from anything else I’m not tall enough but my love of fashion might imply that I am I guess. I just love to dress up. But when it comes to writing it’s just something I have always done. I wrote poetry when I was growing up which eventually turned into lyrics for my songs. Then I picked up a blog with Huffington Post Teen in NYC which was great as it’s just like writing a diary. So when I was approached by David Maybury from Scholastic after the TEDXTEEN event I was like – woah – me? You want me to write a book? It was like insane and how could a budding writer not grasp the opportunity with fingers and pens poised. I loved writing it and I had great help from my editor Lucy Courtney – it was a learning curve for me – how to make my ideas punchier and more dramatic. I feel that I have really grown with her direction and advice. I’m already working on the second book. I must admit I’m really nervous as you just don’t know what people will think or love it as much as I do but hey ho, I’ve done and it’s up to all those teenagers out there to decide.

Are any parts of the novel autobiographical or any of the characters based on anyone in real life?

Sure – it’s fair to say that the inspiration of the story came about after my encounter with Sir Elton John in Hawaii. I gave his partner David Furnish my demo when I was 13 years old – in a hotel restaurant and then next thing you know Sir Elton calls my mobile and invites me to open his football stadium concert in Scotland. It was like your biggest and best fantasy coming true. So yes POP GIRL is set in Hawaii and she meets this superstar pop star (not Sir Elton) and the drama follows. You will have to read it to find out. If I’m honest, I think the Storm’s family – especially her sister, mum and dad definitely have traits like my own family – I think we write as we know and I know how these guys react and as a writer you take from that and inject fun traits into your fictional characters. But it is a fiction book based on my real life experiences. 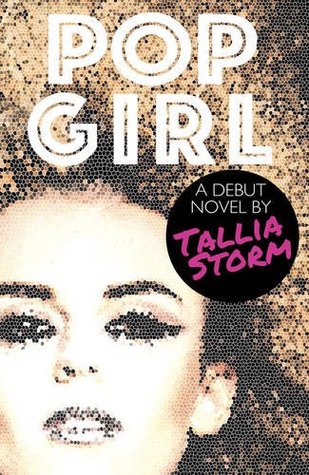 get to meet any celebrities in Pop Girl?

After being discovered at the age of 13 your must have had some amazing experiences! What would you say has been the proudest moment of your career so far?

I’m still at the start of my career – sure I’ve had a load of incredible breaks and good fortune but I’m well aware that I have a seriously long way to go. I never take anything for granted and I rehearse every day in life. I think all of it has been incredible really – opening Sir Elton’s concert to 17,000 people at aged 13 was a dream come true, then I spoke at TEDXTeen in NYC for Nile Rodgers – that was crazy as he is one of my musical hero’s. I grew up singing all his music from Sister Sledge to Chic. Eva Longoria flew me out to Dubai to perform at her charity gala which was also insane – the venue was an rooftop club and stage at the top of a sky scrapper. I felt like I was in a scene from Star Wars or something! I’m also proud of the work I do with charities – I’m a big supporter of Jeans for Genes and do a lot of work with children with genetic disorders. So you should check them out if you have time.

What do you think you’d be doing if you weren’t a recording artist?

Not being a singer is just not an option for me so I would never accept or consider it.

After successfully nailing careers as a singer, songwriter and author what are you planning on doing next?

I would say I have far from nailed it – to me I will feel accomplished when I can fill stadiums and people are singing my songs – that’s what makes me tick – just singing live to an audience. You can take away all the rest – there is nothing quite like it. So I simply plan to keep doing what I’m doing till I can fill out stadiums which in reality may take a while…In between that I’ll be working on POP GIRL 2 of course!

Are you a big reader yourself? Who are some of your own favourite authors?

Gosh yes, part of my school existence was the school book fairs – in fact I vividly remember the big Scholastic signs and book shelves on wheels coming into our local school – it was beyond exciting and my mum would give me £5 to spend on books – which clearly never enough for me. I loved Jacqueline Wilson when I was growing up – I have every copy still in my book shelves now. My father is a bookaholic and books are his life – aside from him library wall, he literally has piles of books even next to his bedside, which is source of huge annoyance to my mum. Aside from my teenage reading I have old faithful loves like To Kill A Mockingbird and my father introduced me to some really heavy philosophers like Nietzche and Kierkegaard – but hey, those guys are for a whole other conversation lol!

A huge thank you to Tallia and Antonia Wilkinson.