This is an ex 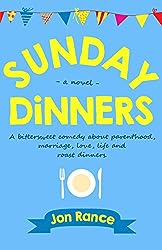 tract from my new novel, Sunday Dinners, which is released on October 26th. This is the prologue and is set thirteen years before the rest of the book. I think it gives you a good introduction to the Wilde family and sets up the rest of the book nicely. You’ll notice that this chapter is narrated by Greg, who is the father of the Wilde family. The book is told from each of the family’s perspectives at their monthly Sunday roast dinners, so you’re really get six stories in one. Lucky you! I hope you enjoy the extract and if so, you can pre-order your copy of the book now for just 99p!

My son, Matt, has unfeasibly pointy elbows. You wouldn’t know it to look at him, but put him at the table next to his sister Lucy and he’s like a James Bond car. His elbows suddenly extend, sharpen, and become weapons of mass annoyance to anyone within a one foot radius.

It’s Sunday and we’re all around the table for our weekly roast dinner. From Monday to Friday, life’s a bit like the London Tube map, and I feel like the bemused foreign tourist staring at it with a pained expression on my face, trying desperately to work out what all the coloured lines mean. The Sunday roast gives us the chance to come together, to reconnect, and, of course, for the kids to fight about their personal elbow space.

‘Matt, stop doing the thing with your elbow,’ I say, for the fourth time.

‘I didn’t do anything,’ protests a disgruntled Matt.

Matt is ten and Lucy is fourteen. It’s hard to believe I have two children in double figures. Matt is the spitting image of me with his pale blue eyes, mop of unruly brown hair, and lanky frame, while Lucy is just like her mother with her wavy auburn hair, soft round face, and obsidian eyes. It doesn’t feel like five minutes since they were crawling around the house, leaving foul smelling presents in their nappies, or eagerly rushing downstairs at the crack of dawn to watch cartoons in their pyjamas. I remember the day we brought Lucy home from the hospital, terrified we were going to somehow break her. I’ll never forget Matt’s first tentative steps in the living room. Even Lucy cheered her little brother on, prouder of him than anyone, before she decided she’d had enough and slyly pushed him over. Now we’re more afraid that Matt’s going to break Lucy than us and Matt’s tentative steps are earth shattering leaps from his bed as he prepares for life as a Teenage Mutant Ninja Turtle.

‘He did it again,’ says Lucy, and I catch a glimpse of his elbow inching away from her.

‘But I didn’t do anything,’ mumbles Matt.

‘You’re not being victimised, Matt, you just have very annoying elbows.’

‘I demand a recount.’

‘This isn’t an election.’

‘I learnt about this at school. It happened in that war.’

‘With that man with the funny moustache.’

‘And the man with the large hat.’

‘And it happened to Jesus. Don’t forget Jesus.’

‘Sorry, Matt, but I don’t think we can compare the plight of your elbows to the son of God.’

‘Matt, please just stop,’ says my wife Lizzy, as always firm but kind and getting Matt to do exactly what she wants. He adores Lizzy and she dotes on him.

Lizzy and I met at university in the eighties. Lizzy with her dark permed hair, the palest of faces, which to some people might have been the epitome of bland, but to me has always been the most beautiful face in the world. We left like a lot of people at that time, eager to change the world. Lizzy wanted to be a playwright and me a novelist. We fell in love over Shakespeare, Oscar Wilde, and Virginia Woolf, but while I ended up wandering into the world of academia and landing a lecturing position at a university in north London, she gave it all up to stay at home and be a mother. Although she’s always quick to remind me that she got a First at university while I only got a 2:1. Housewife or not, she’ll always be cleverer than me and she has the certificate to prove it.

‘What’s that?’ says Holly, pointing at the meat in the middle of the table.

Our youngest, Holly, is only five and unlike Lucy and Matt, she wasn’t planned. We were done having kids after Matt, but then, and despite Lizzy being on the pill, along came Holly. It’s just one of those things, but now she’s here I wouldn’t have it any other way. Although, I did get a pretty swift vasectomy to be on the safe side. Holly is the mirror image of my mother as young woman. She has the same almost white blonde hair, piercing blue eyes, is stick thin, and is terrifyingly independent and strong willed.

‘Like the lambs I see when we drive to the country?’

‘Not those actual lambs.’

‘But it’s one of those lambs? The ever so cute fluffy lambs?’

‘Yes it is,’ says Holly defiantly.

‘But that’s different,’ says Holly, very matter-of-fact. ‘Cows are black and white and boring, not cute like lambs. Cows just moo and do big poo pats.’

Only five and already the moral centre of our family. Unlike Matt, who doesn’t care enough about anything, or Lucy who picks her battles with surgical precision, Holly throws herself into every cause, every last mangy pony that needs saving or tree that needs protecting. She’s always asking questions and demanding we answer them. It’s exhausting.

‘I talked about this with Charlotte’s mummy,’ says Holly.

‘About what, love?’ says Lizzy.

‘And that people who do are murderers,’ says Holly obstinately.

‘But Daddy isn’t a murderer,’ says Lizzy. ‘He bought you that nice red bicycle for your birthday. A murderer wouldn’t do that, would they?’

We all look at Holly, who seems to be giving this a great deal of thought.

‘But someone killed that faceless baby sheep and I’m not eating it,’ says Holly, and she stubbornly folds her arms across her tiny, five year old chest in defiance. ‘I mean, you wouldn’t eat a puppy, would you?’

‘Well, yes they are, sweetheart.’

‘Dad’s what you call a hypocrite,’ says Lucy.

‘Happycrit!’ shouts Holly, standing up and pointing at me. ‘Daddy’s a happycrit!’

‘Right, that’s it!’ says Lucy, picking up a gravy sodden roast potato and throwing it at Matt. The roast potato hits Matt directly in the face, droplets of dark brown gravy dripping down his nose.

‘Food fight!’ yells Matt, springing up, and holding his fork aloft like a young Spartacus.

‘No!’ Lizzy and I shout in unison, but it’s too late. A Brussels sprout hits Lucy in the head. Holly launches a carrot at Matt, which doesn’t make it and ends up on the floor, and then before I know what’s going on it’s all-out war. Lucy gets up and runs away, Matt hot on her heels, then the next moment I hear screams and feet stomping up the stairs. And in the middle of the table there’s a melange of half-eaten Sunday roast.

Admittedly, our family roasts aren’t like the commercials they have on television (the Oxo family we are not) but like I said, I wouldn’t change a thing. This is my family. I love them all to bits and a part of me wants to keep this, just as it is now, like one of those tiny ships in a bottle, but I know I can’t. Right now life is good, but one day all this is going to change and so I intend to enjoy it while I can; warts, elbows, food fights and all. Because that’s the thing about life, it doesn’t matter how happy you are or how happy you think you’re going to be in the future – without warning it can all change in a second.

Sunday Dinners is released on the 26th October 2015. Click here to pre-order your copy for 99p!