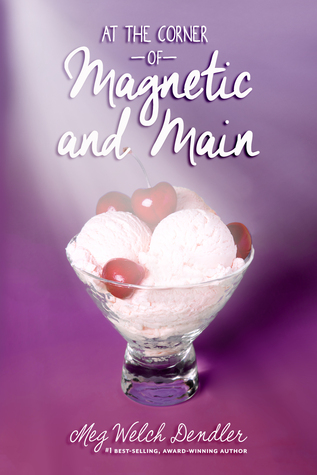 It’s hard to get on with your life when you’re already dead.

Penny had been stuck in the same diner for decades—ever since she died in 1952. Her diner was comfortable and safe. Serving ice cream to those who dropped in on their way to the next level of existence, she helped to ease their transition into The Light, the one place she can’t go. Her afterlife was perfect.
But when the ridiculously handsome, bad-boy biker Jake Thatcher shows up and becomes stuck as well, Penny rediscovers feelings that she thought had been buried with her body.
Life is still life, and love is still love. But was her existence really perfect, or was it something else entirely?

When handsome biker Jake is tragically killed in a motor bike accident he finds himself at quirky diner Magnetic and Main. At first he refuses to believe he is dead, until he meets the beautiful Penny. Penny is a ghost who has been stuck at the diner since her death as a teenager in 1952. Whilst most deceased souls drop in on the diner immediately after their death, they are soon transported onto the next stage of the afterlife as they make their way into The Light. However, this hasn’t happened for Penny and she has been stuck serving up ice cream and watching over the owners of the diner, Molly and Hank. Not that she’s unhappy with this – after all the diner at Magnetic and Main is a wonderful place to spend your days, with it’s Coca-Cola memorabilia and shiny red counter – plus the amazing selection of delicious ice-creams on offer that she can sample at any time – what’s not to love?
But it seems the arrival of bad-boy Jake turns Penny’s existence upside down. Jake is determined that he’s not heading off into The Light any time soon and intends to cause as much mischief and havoc in this small town as possible. Penny is in awe of Jake and the attention he lavishes upon her so when he asks her to leave the diner and cause mayhem with him all over America she is tempted but she can’t possibly leave Molly and Hank behind. And what about all of the poor lost souls that she helps them to make their transition into The Light? It’s going to take a lot of convincing for Penny to contemplate leaving her beloved Magnetic and Main behind – but is that really the right thing to do?

I was intrigued by the synopsis for At the Corner of Magnetic and Main. I’m not usually a big reader of ghost stories but I liked the spin on this one with the added elements of romance, friendship and having the courage to do what’s right in life.
I really enjoyed this sweet ghostly tale. It’s not in the least bit frightening and offers up much more than you might expect from a charming romance. I especially loved the relationship between Jake and Penny. There is so much more to their friendship than being attracted to one another – it goes way beyond that and I really liked how Meg was brave enough with her storytelling to take the novel in a direction that you maybe wouldn’t expect. This kept the story fresh and (maybe surprisingly for a ghost story) – believable.
I loved how we receive snippets from the character backgrounds but are never overloaded with their pasts. This way you get to feel as though you know the characters but it doesn’t delay the actual progression of the story.
The whole message behind the story of being brave enough to move on in life – even when you think you are perfectly happy how things have turned out but are given the chance of a more promising future really resonated with me.

Meg’s writing is really special. She has made this gorgeous tale believable and brought her ghostly characters to life in a way that will capture readers attention and melt your heart at the same time.

Halloween might be over but this beautiful story about the after-life is the perfect read for any time of year.

A huge thank you to Meg for having on board the official blog tour for At The Corner of Magnetic and Main.♥

Meg Dendler has considered herself a writer since she won a picture book contest in 5th grade and entertained her classmates with ongoing sequels for the rest of the year. Beginning serious work as a freelancer in the ’90s while teaching elementary and middle school, Meg has over one hundred articles in print, including interviews with Kirk Douglas, Sylvester Stallone, and Dwayne “The Rock” Johnson. She has won contests with her short stories and poetry, along with multiple international awards for her best-selling “Cats in the Mirror” alien rescue cat children’s book series.

Meg and her family (including four cats and her dog, Max) live at 1,400 feet in the Ozark Mountains on what they call Serenity Mountain, just outside of Eureka Springs, Arkansas. Visit her at www.megdendler.com for more information about upcoming books and events and all of Meg’s social media links.

One thought on “Book Review: At the Corner of Magnetic and Main by Meg Welch Dendler”