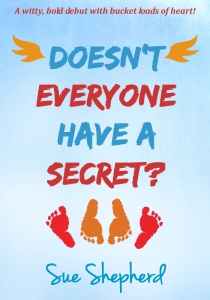 Doesn’t Everyone Have a Secret? is a romantic comedy about three very different people, each with a secret, whose lives collide in unexpected ways.

Steph is a harassed mum who’s considering an affair with her children’s sexy headmaster. Penny is trying to deal with a crush on her boss, OCD and a sad secret from her childhood. And Mike is a vicar who is being blackmailed for his secret, although it’s not all that it seems!

Meanwhile, all three are being watched over by their own guardian angels, who try to push them in the right direction and help move their lives along – but not always successfully …

Doesn’t Everyone Have a Secret? is genuinely laugh out loud funny, but also deals in a sensitive way with serious problems that any of us could face in life. Sue Shepherd’s debut novel is bold, it doesn’t pull any punches, and it has bucket loads of heart.

Meet Steph Stubbs. Steph is a frazzled mother of two children who is well and truly fed up with her life. Daydreaming of dark, handsome strangers (or Johnny Depp) is starting to lose its appeal when Steph meets her children’s headmaster,Mr Churchill a.k.a Gareth. Steph fancies Gareth like mad, but it’s not like she’d ever do anything about it. Is it?
Then there’s Mike, a well-respected and extremely popular vicar who is happily married to his wife Jane. So who is the young woman whose house he keeps visiting?  Who has he started sharing Ovaltine with? When a stranger spots Mike visiting a woman who’s not his wife things look set to take an unexpected turn…
And finally we have Penny. Penny is hopelessly in love with her boss, Mr Clarke, and is suffering from OCD. She has developed the ritual of touching everything three times (including Mr Clarke’s bald head.) However it soon becomes apparent that Penny is hiding a painful secret. Will she ever overcome her OCD and win Mr Clarke’s affections?

What Steph, Mike and Penny don’t know is that their lives are being watched over by a group of guardian angels. You know how we all sometimes have a little nagging voice at the back of our minds telling us that we should do something? Well, in this case it’s the guardian angels are who behind those voices. Whilst they can’t control the decisions that Steph, Mike and Penny make, they can certainly try to guide them in the right direction. But with these three characters it doesn’t look like the angels have got an easy job on their hands…

I really enjoyed the whole concept of Doesn’t Everyone Have a Secret? The three lead characters are wonderful to read about in themselves, but once you add the guardian angels into the mix you’ve got a unique, funny and hugely compelling story on your hands.
Steph, Mike and Penny were all such wonderful lead characters. I was fascinated by them all and felt they were easy to relate to. The problems that they faced were believable and I couldn’t wait to find out how things were going to pan out for them. Would Steph give in to Mr Churchill’s charms? What WAS Mike up to? What was Penny hiding from her past? I felt as though I quickly bonded with these three and genuinely cared about them. They made me laugh, made me cry and held my attention perfectly.
Character-wise the guardian angels were perfectly formed and also a joy to read about, with each having their own unique personality (I was a big fan of Aldo, personally…)

There were so many times throughout the story where I chortled with laughter and I completely loved Sue Shepherd’s style of writing. I like how Sue has the ability to switch subjects from a light hearted moment to a much more serious matter, all within the turning of a page. Sue handles these difficult topics with sensitivity and care and I really felt as though she was writing from the heart.

If you like your romantic comedies but are on the lookout for something with a twist then I think you may have found what you’re looking for with Doesn’t Everyone Have a Secret? It’s warm, bold and a all-round fantastic debut which I highly recommend!

I am currently offering the chance for one lucky reader to win a paperback copy of Doesn’t Everyone a Secret? Click here to enter.

A huge thank you to Book Blogger Central and Ian at Corazon Books. ♥ 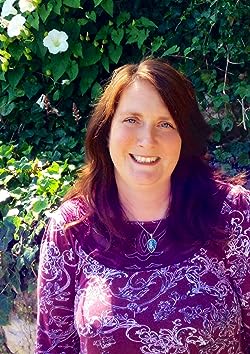 Sue Shepherd is the author of ‘Doesn’t Everyone Have A Secret?’

Born in Harrow, forty-something years ago, Sue went on to spend several years living in Hertfordshire before selling up and taking a leap of faith across The Solent. She now resides on the picturesque Isle of Wight with her husband, two sons and a standard poodle. Her passions in life are: her family, writing, the sea-side and all the beautiful purple things her sons have bought her over the years. Happiest when hunched over her laptop with a cup of tea on the go, Sue loves to create stories with plenty of heart and laughs, but, she makes sure to include a bit of grit and sex too.

Ask Sue to plan too far in advance and you’ll give her the heebie-jeebies and she’d prefer you not to mention Christmas until at least November!

Describing herself as having Champagne tastes and a Cava bank account, Sue hopes you enjoy her debut novel.

2 thoughts on “Book Review: Doesn’t Everyone Have a Secret? by Sue Shepherd”