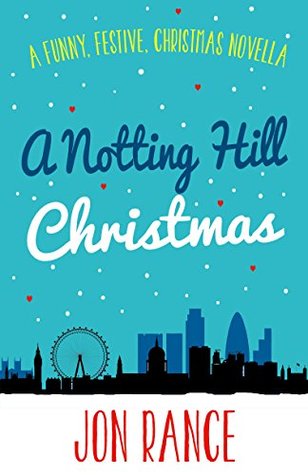 Ben’s flat isn’t big enough for everyone (including one very angry dog), the Christmas tree’s from the £1 shop, the decorations are hung with Blu-Tack, and the turkey might not fit in the oven. Ben’s definitely not feeling the Christmas spirit. But when beautiful new neighbour, Mhairi McGregor, appears at his door, Ben’s Christmas worries go out of the window and he begins to wonder if it might not be the worst Christmas in history after all.

Amid all the drama, drinking and carnage of Christmas Day, will Ben find true love or will it be another disappointment to add to the list? A Notting Hill Christmas is a brilliantly funny, feel-good, festive novella perfect for fans of romantic comedies like Love Actually and Notting Hill.

Ben Canterbury is determined that things are going to be very different this Christmas. Instead of everyone descending on his smug brother Jamie’s house over Christmas and listening to his endless boasting about his perfect car, perfect family and perfect high-powered job, Ben has decided that he’s doing Christmas this year. In his tiny flat in Notting Hill. Whilst Notting Hill might be perfect in the movies, in Ben’s flat it isn’t. (Especially as the kitchen stinks of an egg sandwich from the eighties. Nice)
As Ben prepares for the arrival of his Mum, Dad, Brother, Sister-in-Law Holly, nephew Henry, and his Mum’s dog Mr Waggles, things don’t look as if they’re going to go to plan when Ben panics that the turkey won’t fit in the oven and he realises he doesn’t have enough chairs. ARGH.
However, Ben is saved from full-on panic mode when his new neighbour knocks on the door in search of teabags. Mhairi McGregor is just back from travelling the world and it soon transpires that both she and Ben get on like a house on fire. So much so that he decides to invite her to stay for Christmas lunch (plus she can supply chairs! Winner!) Mhairi is wonderful – gorgeous, funny, and all-round lovely. Ben really likes her but starts to panic that maybe she’d be out of his league. Then when his woman-crazy flatmate, Rufus, ends up joining them for Christmas, Ben is worried that he’ll steal Mhairi from under his nose.
A smug brother, a large supply of nuts and one very moody dog dressed in a reindeer costume. What could possibly go wrong? Um…Only everything.

If you regularly read my blog then you will know that I am a mahoosive fan of Jon Rance. I am also a mahoosive fan of Christmas. Put the two together & you have one hilarious, touching, warm and super festive novel that I absolutely adored.
One of the reasons as to why I love Jon’s writing so much is because, put quite simply, it’s just very, very funny. His sense of humour is spot on and the way he manages to translate that into his writing is brilliant. He manages to make real-life situations that everyone can relate to completely chortle-worthy and that is why he is so darn good. I’m sure that everyone will be able to relate to the family tiffs and rivalries that Jon focuses on in this story. Things always seem to come to a head when everyone is gathered around the Christmas table and Jon has managed to make the whole scenario both scarily realistic and side splittingly funny at the same time.
Rufus (Ben’s Welsh flatmate. Loves women and Christmas pants) is utterly HILARIOUS. I mean, seriously – this guy is a one off. Despite him being totally outrageous I have no trouble envisaging him in my mind (sadly I have no trouble envisaging those Christmas pants either…)
Jon Rance has a talent for creating lovable lead characters (Take Harry Spencer from This ThirtySomething Life…) Ben is no different. He is such a sweet-natured character who often gets completely over looked. He doesn’t have a high opinion of himself and you’ll immediately fall for him in the way you find yourself developing a soft spot for Harry in Jon’s previous books. He wanted Christmas to be a success and you’ll be crossing everything that he gets the Christmas he hopes for (and maybe the woman…?)

Jon Rance also has this massive talent for combining the hilarious and the down-right heartbreaking. I’m not sure how he manages to fit so many sides to a story into one short novella but he does. Yes, this is definitely a giggle-fest of a story but there’s also a much more serious side to proceedings which you’ll discover when you read for yourself. You MIGHT even shed a tear. Don’t say I didn’t warn you…

A Notting Hill Christmas has combined all of my favourite things about Christmas and wrapped them in a perfect parcel, complete with a festive bow. There’s family, friendships, humour, animals, romance, Quality Street and also an important message nestled amongst the wrapping.

One of my all-time favourite Christmas novellas…

A huge thank you to Jon Rance for sending me a copy of A Notting Hill Christmas to read and review. ♥

Jon Rance is the author of the novels, This Thirtysomething Life, which became a top ten Kindle bestseller, Happy Endings, and This Family Life. His latest novel, Sunday Dinners, will be out soon.

One thought on “Book Review: A Notting Hill Christmas by Jon Rance”