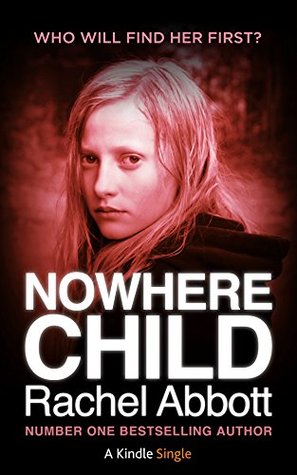 Someone is looking for Tasha. But does she want to be found? Eight months ago Tasha Joseph ran away, and her stepmother, Emma, has been searching for her ever since. She is desperate to give Tasha the home and security she deserves. The problem is, Emma isn’t the only one looking for Tasha. The police are keen to find her too. She could be a vital witness in a criminal trial, and DCI Tom Douglas has a team constantly on the lookout for her. But Tasha remains hidden, and nobody appears to have seen her. Suddenly, the stakes are raised. Somebody is offering money – a lot of money – for information about Tasha’s whereabouts. Tom and Emma know they have never been closer to finding the young girl. But they also recognise that she has never been closer to danger. Can they find her first?

We first met Natasha Joseph in Rachel Abbott’s utterly fantastic novel, Stranger Child, which was released in February of this year. In the novel Natasha has suddenly turned up on her father’s doorstep after being missing for six years. Her father was living with his new wife, Emma and they had a baby son together. Where had Natasha been? Why wouldn’t she speak? Why had she come back?
The novel was action packed and a complete page-turner, however it did leave us with one or two loose threads and the question on almost every reader’s lips would have been – what happened to Natasha?
When we left her at the end of Stranger Child she has pulled one almighty disappearing act, in fear that she would be in trouble for her actions earlier in the novel. However, Emma is far from angry with Tasha, despite all that went on and she is determined to find her step daughter. She desperately wants to give Tasha the secure and loving home that she deserves.
Tasha is now living rough on the streets on Manchester and doing her very best to avoid ever being detected. Her life is bleak but she is adamant that she won’t return home. With nothing but the clothes on her back and the friendship of a young boy called Andy, Tasha spends her time living in squalor and hunger.
However, when someone comes looking for Tasha and mentions that a reward is up for grabs, Tasha senses that something isn’t right. Has Emma put up the reward for Tasha’s return? Or could it be the Police? But there are hundreds of missing children- why would they offer up a reward for her? It soon becomes apparent that Tasha might never be able to escape the demons from her past…

Stranger Child was the first novel of Rachel Abbott’s that I had read and I completely loved it. I was taken in by her writing and became fully submerged in the story. After becoming so invested in the characters I was thrilled when I discovered that Rachel had written a sequel and I couldn’t wait to find out more about Natasha’s fate. Would she return home? Where had she gone? Would Emma get her wish and be re-united with her step-daughter?
I had so many questions and Rachel Abbott certainly didn’t disappoint. Nowhere Child was a cracking follow-on and was just as tense, heart breaking and enthralling as its predecessor.
It was great to be reunited with the familiar characters, particularly Emma and DCI Tom Douglas. My heart went out to Emma and the warmth and kindness she showed towards Tasha. I desperately wanted Tasha to realise what was waiting for her at home, give up life on the streets and live happily after with Emma and Ollie (preferably with the wonderful Andy coming to stay, too) but this is no fairy-tale. This is real life and in Stranger Child absolutely nothing is guaranteed.
I was scared for Tasha. The life that she lives on the streets will undoubtedly make you grateful for all of the things you have. It’s scary and rather sobering.
I was also scared that this innocent young child would never be allowed to live a normal life. All she has known is heartbreak and terror and she firmly believes that everyone who gets close to her ends up hurt in some way. Tasha is a truly fascinating character to read about who you cannot help but empathise with. Her role in Stranger Child was hugely compelling and she is exactly as complex in the follow-up. It is so easy to forget that she is just a child herself as she has been through such a lot and her attitude towards life is understandably dark.
Be warned – Nowhere Child is one of those novellas that you’ll pick up and won’t be able to concentrate on anything else until you have read every single page. I couldn’t rest until I knew of Natasha’s fate and the way that Rachel Abbott draws you in to the story really must be applauded.
This is one author I am hugely glad that I have discovered and I can’t wait to make my way through the rest of her novels. Give Nowhere Child a read regardless of whether you have read Stranger Child or not…either way you will become consumed by Rachel’s words and you’ll be one-clicking your way through her entire back catalogue in no time…

A huge thank you to Rachel Abbott for offering the me chance to review Stranger Child. ♥

Rachel Abbott was born and raised in Manchester. She trained as a systems analyst before launching her own interactive media company in the early 1980s. After selling her company in 2000, she moved to the Le Marche region of Italy. When six-foot snowdrifts prevented her from leaving the house for a couple of weeks, she started writing and found she couldn’t stop. Since then her debut thriller Only the Innocent has become an international bestseller, reaching the number one position in the Amazon charts both in the UK and US. This was followed by the number one bestselling novels The Back Road and Sleep Tight. Rachel Abbott now lives in Alderney and writes full-time. Stranger Child is her fourth novel.

ow long can she hide?

can run – but for how long can she hide?

e can run – but for how long can she hide?