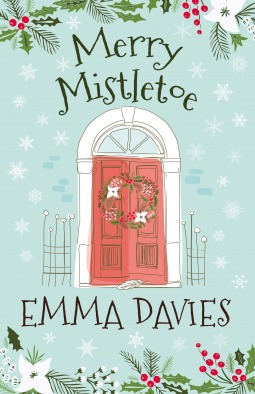 Sherbourne Mistletoe has been prized and sold at the annual Mistletoe Fair for over a hundred years; but could this year possibly be the last? With her father’s sudden death and debts mounting up it looks as though Freya’s only hope for the future is to sell her beloved family home. And to make matters worse, the only contenders to buy Appleyard Farm, are the people she’d least like to sell it to – the dreaded Henderson brothers who seem always to make life so difficult.

It’s magical stuff though, mistletoe, and the arrival of the mysterious Amos Fry brings a glimmer of hope that just maybe Freya can fall in love with Christmas all over again.

As the snow begins to fall, cosy up and find your sparkle this Christmas with another big-hearted, and wonderfully warm read from the author of Letting in Light.

Poor old Freya Sherbourne is having a rough time of things at the moment. The first Christmas without her father is fast approaching and she is struggling to keep her head above water with regards to running the beloved Appleyard Farm, which Freya inherited from him. She is doing her best to sell the famous ‘Sherbourne Mistletoe’ at local fairs but money is still ridiculously tight.  Her boyfriend Gareth couldn’t be less supportive and when Freya reluctantly considers selling the farm it becomes apparent that the dreaded Henderson brothers are keen to buy. But why is Freya so reluctant to hand the farm over to them?
Then when a mysterious stranger called Amos appears, this Christmas looks set to be one to remember after all…

Emma Davies blew me away with her debut, Letting in Light, so naturally I was super excited about reading Merry Mistletoe. Not only is it more of Emma’s fantastic writing but it’s also based around Christmas! Hurray! What more could you possibly want!?
Merry Mistletoe certainly didn’t disappoint and lived up to all of my expectations from its predecessor. Emma has just got such a warm and cosy way with words. She crafts both her storyline and characters so well and has created a beautifully sweet, memorable, festive romance.

Written in the format of a countdown to Mistletoe Day and Christmas, I loved how the story unfolded. I really liked Freya and badly wanted things to turn out right for her. It seemed to unfair that she had so much to deal with and you could see how much she was struggling. Her boyfriend Gareth was as much use as a chocolate teapot and I couldn’t wait for Freya to give him his marching orders. All he cared about was getting his hands on the money from the sale of Appleyard farm. What a creep…

Whilst there are only a small selection of characters in the story they are each well-formed and memorable in their own way. Firstly you have Amos – no one quite knows who exactly Amos is and you never really fully find out. He likes sleeping on the floor, doesn’t have a permanent address and has an uncanny ability to predict when there’s snow on the way…. But not knowing exactly what or who Amos is is undoubtedly a good thing. I have it in my head that Amos is some kind of Guardian Angel, sent to look out for Freya and guide her on the right path, but by not knowing for sure I feel as though Emma has left it down to the reader to make their own decision about this wonderful character. Amos can be whoever you want him to be…It may not be that Emma intended for the reader to come to that conclusion, but that was what I took from it and it not knowing made the story all the more special and magical for me.
When Freya comes to terms with the fact that she will have to sell the farm I was desperate to find out why she was so reluctant to sell to the Henderson brothers. Don’t get me wrong, Stephen Henderson was awful – smug, selfish and a total bully and whilst that is reason enough to dislike him, it soon became apparent that there was more than meets the eye where Freya and the Henderson’s were concerned. As you make your way through the story all will be revealed and you’ll be able to discover if your inklings were correct…
The strongest theme that shone through this story for me was that of friendship. It demonstrates just how much you can achieve if you have the support of others and proves that a little help can go a long way.
There’s also the romance side to things which, as with Letting in Light, Emma does so, so well. When reviewing Emma’s debut novel I remember being struck by how much her writing reminded me of Katie Fforde’s (which is the HUGEST of compliments – I love Katie!) and Merry Mistletoe definitely has something ‘Katie Fforde-ish’ about it too.

Gentle, sweet and hugely re-freshing, Merry Mistletoe is a sparkly gem of a novella that’s not to be missed this festive season…

A huge thank you to Lawsome books for approving me on NetGalley to read Merry Mistletoe. ♥

After a varied career Emma Davies once worked for a design studio where she was asked to provide a fun and humorous anecdote for their website. She wrote the following: ‘I am a bestselling novelist currently masquerading as a thirty something mother of three.’ Well the job in the design studio didn’t work out but she’s now a forty something mother of three, and is working on the rest.

Today she’s a finance manager and looks at numbers a lot of the time, so at night she likes to throw them away and play with words, practicing putting them together into sentences. Pop over to her website http://www.emmadaviesauthor.com where, amongst other things, you can read about her passion for Pringles and singing loudly in the car.