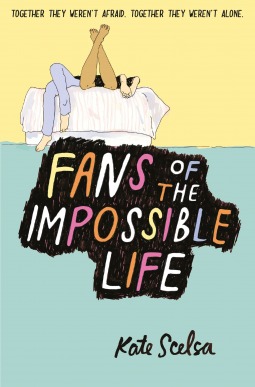 Ten months after her recurring depression landed her in the hospital, Mira is starting over at Saint Francis Prep. She promised her parents she would at least try to pretend that she could act like a functioning human this time, not a girl who can’t get out of bed for days on end, who only feels awake when she’s with Sebby.

Jeremy is the painfully shy art nerd at Saint Francis who’s been in self-imposed isolation after an incident that ruined his last year of school. When he sees Sebby for the first time across the school lawn, it’s as if he’s been expecting him.

Sebby, Mira’s gay best friend, is a boy who seems to carry sunlight around with him like a backlit halo. Even as life in his foster home starts to take its toll, Sebby and Mira together craft a world of magic rituals and impromptu road trips, designed to fix the broken parts of their lives.

As Jeremy finds himself drawn into Sebby and Mira’s world, he begins to understand the secrets that they hide in order to protect themselves, to keep each other safe from those who don’t understand their quest to live for the impossible.

A captivating and profound debut novel, Fans of the Impossible Life is a story about complicated love and the friendships that change you forever.

When I saw the tagline for this novel (“The story of a girl, her gay best friend and the boy who falls in love with both of them.“) There was no way I wasn’t reading it.

Fans of the Impossible Life tells the story of Mira, Jeremy and Sebby. First up we meet Mira when she is starting a new school, Saint Francis Prep. Mira is struggling after suffering from crippling depression and chronic fatigue syndrome but she’s trying her best to just be normal. The only thing that gets her through each day is her best friend, Sebby. Sebby is living in a foster home and doesn’t attend St Francis. In fact he doesn’t really attend any school unless he can help it… Wild, carefree and full of life, Sebby is Mira’s lifeline and she doesn’t know what she would do without him, or him without her…
Then you have Jeremy. After an incident at school the year before, Jeremy is doing his best to appear invisible and spending all his time in isolation with teacher, Peter. However, circumstances end up introducing him to Mira…Which in turn lead him to meeting Sebby. (There’s no Mira without Sebby, after all…)
Before long Jeremy is let in to the magical and extremely intimate friendship that Mira and Sebby share. The more he starts to uncover about the pair the more drawn he becomes towards them. It soon becomes clear that Mira and Sebby are fragile and broken human beings who use each other as protection from the difficulties they face in every day life. Jeremy is captivated and it’s not long before he begins to fall for Sebby as he discovers the importance of facing up to who you really are and learns that there is no stronger bond then friendship…
I consider myself to be an extremely emotional reader and this book really hit me where it hurt. I got completely caught up in the story line and it kind of took over my life whilst I was reading it. It really spoke to me on so many different levels and made me want to laugh/cry/scream/smile/throw a tantrum. I was SUCH a mess when I was reading this and my emotions were all over the place. It was really that good.
The style that the book is presented in is really unusual. We get to hear from Mira, Jeremy and Sebby in alternating chapters, but their style of narration is really intriguing. We mostly hear from Jeremy and Mira who narrate in the first person and third person. We get the odd chapter from Sebby which is written in the second person. This added a really unique dimension to the story as we were able to understand Mira and Jeremy’s thoughts and feelings first hand but perhaps less so with Sebby’s. This style was really effective and I liked how it mixed things up a bit and helped you to see certain characters from a different perspective.
These three characters that Kate Scelsa has created really are something special. I fell in love with Sebby right from the start. He was just so vibrant, outgoing, brave and funny. I wanted him in my life immediately. In fact I wanted to hug him and look after him. Scrap that – I wanted to hug them all. I loved them. I badly wanted to put glitter on my face and wear wings with Sebby and Mira. These characters were really special to me and I think they are ones who will stick with me. Mira because she was so easy to relate to. Her issues regarding mental health will speak to so many readers who will be able to empathise with her. Jeremy because he was just too darn cute. He’s described as being an ‘art nerd’…You’ve got to love a nerd. He was also likeable, sweet and I genuinely cared about him. Then there’s Sebby – well you already know I love Sebby. I got cross with him towards the end because I wanted things to be different but that’s just how it goes…
So many themes are up for discussion in Fans of the Impossible Life; mental health, sexuality, romance and friendship are just a few. Kate Scelsa tackles everything she writes about bravely and realistically and I simply loved her style of writing.
Seeing as I loved this story so much you might be wondering why I didn’t whack on a 5 star rating. The only reason is because I wanted MORE. There were just too many lose ends and I can’t settle until I know more of what happened. I cared about these characters and invested my time and feelings into their lives…Now I just want to make sure that they are all ok. (Please write a sequel, Kate!!)
All in all a brilliant YA novel that is definitely worth a read, whether you’re into Young Adult titles or not. Captivating, emotional, magical and heart breaking this is a powerful tale that emphasizes the importance of accepting who you are.
A huge thank you to LoveReading.co.uk for sending me a copy of Fans of the Impossible Life for review. ♥