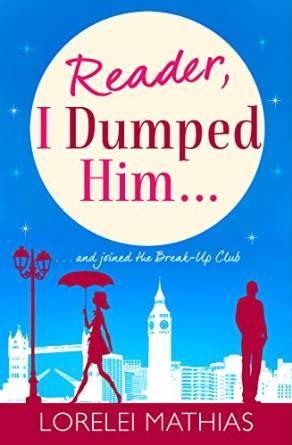 This story is a celebration of the people that bring you back to life when your world closes in: your mates.

Holly Braithwaite and loveable loser Lawrence have been together for five years. But the obvious cracks in their relationship can no longer be ignored and Holly soon finds herself saying ‘it’s not you, it’s me.’

In the shock aftermath of their break up, Holly finds unlikely companions in Olivia, Harry and Bella. Together, they form the Break-up Club, as they support each other through their mutual melancholy and find ways to love, laugh and function as human beings again.

Break-up Club meets every Sunday. Each week, as the comedy and drama unfolds, they discover a new BUC ‘rule’. And, one by one, the rules become vital markers on their journey to recovery . . .

Holly and Lawrence have been in a relationship for five years when she does the unthinkable – she dumps him. Only it’s not long before you discover why…And let me tell you Holly has one or two (or ten) valid reasons for calling time on her relationship with ‘Lawry’.
However, just because Holly is the ‘dumper’ doesn’t make the fact that the relationship with the man she thought she would spend the rest of her life with is over any easier. It just so happens that her flatmate, Bella and close friends Olivia and Harry are also going through break-ups of their own. Commiserating with each others misery and newly single status the friends hit upon a genius idea which leads them to start their own club – The Break-Up Club. A club quite unlike any other, the purpose of the BUC is to allow its members to fully recover from their past relationships and learn to be ‘normal’ once again. There are a few rules that members must abide by and these include no Facebook stalking, no hooking up with other members and being prepared to drop everything when a fellow member is in crisis.

But can the Break-Up Club really be the cure for a broken heart? Holly, Olivia, Bella and Harry are determined to find out and have a lot of fun (and mishaps) along the way…

When Reader, I Dumped Him first came onto my bookish radar I was VERY excited. It sounded fantastic – and what a genius idea! I loved the premise of the story, I loved the title and I loved the cover. As a mega fan of romance I was also massively intrigued to see how ‘a love story about break-ups’ would play out.

My favourite thing about Reader, I Dumped Him just has to be the characters. Lorelei has created four loveable, honest and relatable characters in Holly, Bella, Olivia and Harry. Sometimes outrageous, sometimes infuriating but always extremely fun, I firmly believe that if you were going through a break-up there would be no better foursome to help mend your broken heart. I just loved reading about this group of characters so much. I miss them now I’ve finished the book… Holly was probably my favourite character, not only did she have an awesome name (!) but she was absolutely hilarious and great fun to read about. (Although I do think she should have ditched ‘Lawry’ much sooner than she did…)

I also loved the side of the story that focussed on Holly’s job. Working for an evil boss as a TV editor, Holly is constantly trying to come up with new show ideas to save her editing career at the (frankly awful) reality TV station that she works for. Her boss, Jez, is pretty loathsome but will certainly generate a giggle or two as he rants about the ‘Asda Mum’s’ that are the channel’s target audience.

The Break-Up Club is a club that everyone will want to join – regardless of your current relationship status. This novel really is a laugh-a-page and Lorelei’s writing is sharp, witty and above all, realistic. The storyline keeps you guessing and is full of twists and turns right up until the end.

As we escape from the fluffiness of Valentine’s day, this book is the perfect anti-dote to all of the OTT smoochiness we are subjected to every February 14th. If you are experiencing heartbreak of your own then Reader, I Dumped Him is just the medicine you need. It’s the equivalent of a big, snuggly hug in book form (with a side order  of Ben and Jerry’s.) It’s fun, light and will help you to escape real life as you join this group of memorable characters on their quests to heal their hearts.

I love how, ultimately, Lorelei proves that whilst relationships may come and go, friendship is what really matters in life.

A huge thank you to publishers, Avon, for approving me to review Reader, I Dumped Him on NetGalley. ♥

Lorelei Mathias was born in ‘Metroland’ to English and Romanian parents. She studied English & Philosophy at Birmingham University. She has worked in London as a Copywriter in Publishing and Advertising, and also writes the occasional magazine article, having been a regular blogger for both Campaign Magazine and Caitlin Moran’s website.

Her first novel Step on it, Cupid, was published when she was 25, followed by Lost for Words. As a member of the writers collective ’26’, she has had a poem exhibited at the Museum of Childhood, and a non-fiction chapter published in Common Ground: Around Britain in 30 Writers. Credited as having one of the ‘best youtube trailers for a book, ever’ (well, this was back in 2006 and they didn’t really exist back then), she has also contributed to a number of books and articles about online marketing for authors.

Her latest book explores the importance of friendship, and was inspired by her experiences in an accidental break-up club of her own… which taught her that a break up shared, is a break up halved. One day she’d like to set up an official refuge for the broken-hearted, so that no one should ever have to go through one alone.

When she’s not writing, she enjoys making comedy sketches and short films, running a fictional bakery called Niche Quiche, and asking people where the nearest lido is. She is also named after a mythical German mermaid, which might explain the obsession with outdoor swimming.

3 thoughts on “Book Review: Reader, I Dumped Him by Lorelei Mathias”