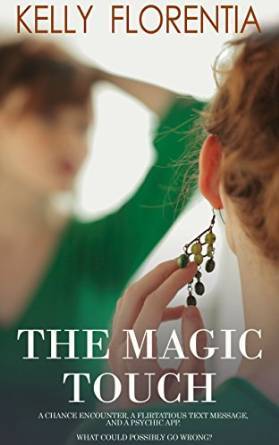 Marriage isn’t high on 39-year-old Emma King’s list of priorities; after all, she’s been there and done it once. So there are no big surprises when, yet again, she turns down her long-term partner Harry’s marriage proposal. They’re a solid, secure couple – a piece of paper won’t make any difference. That is until she accidentally stumbles across a flirtatious text message from one of his female colleagues on his phone. Overcome with suspicion and an impending fear of losing Harry, Emma goes on a quest to get to the bottom of his secret affair with the help of her ninety-three-year-old neighbour, Alistair, her best friend Ola, and Harry’s sister-in-law’s psychic app, The Magic Touch

I read Kelly’s excellent collection of short stories, To Tell A Tale or Two, two years ago and ever since I have been desperate to read more of her writing.
When I learnt of her first full length novel, The Magic Touch, I was rather like a over-excited child on e-numbers at Disneyland. I couldn’t WAIT to read it and I loved the sound of the story.
Usually when an author I love releases a new book I’m always a tad apprehensive; what if it doesn’t live up to my expectations? For some reason I didn’t get that feeling at all with The Magic Touch. It was just one of those books I knew was going to be right up my street and whilst I might not be as mystic as the wonderful Caroline, on this occasion I was right (who needs a magic app!?)

The Magic Touch tells the story of Emma King and her relationship with Harry. Part of a huge Greek clan, Harry is keen for Emma to tie the knot and become his wife, however Emma is somewhat more reluctant. Her first marriage ended in heartbreak and has left Emma scarred (physically and mentally), and her relationship with Harry is solid, they don’t need to get married to prove that they love one another.
However, Emma starts to question Harry’s commitment when she finds a text from one of his (female) colleagues on his phone. Then when Harry puts a *whispers* pass code on his phone, it’s clear there is something on there he doesn’t want Emma to see. But what? Emma starts to panic and turns to her best friend Ola and sister-in-law Caroline for advice. Caroline is about to launch her own physic app called The Magic Touch and she urges Emma to use it. Who knows, maybe it holds the answer to Emma’s relationship woes? And with Emma being such a smart-phone addict it will surely be perfect for her? Despite the cynicism from Emma’s good friend and elderly next door neighbour, Alistair, Emma gives the app a go. But when it starts to predict some very odd things Emma feels a tad uncomfortable, particularly when it warns her to beware gifts from strangers…Should Emma heed the advice of The Magic Touch and is she really ever going to get the bottom of what Harry is up to?

I’ll be the first to admit that I’m not the quickest of readers (hello towering TBR pile. Gulp.) but when I get into a book and I mean REALLY get into a book, I skim through it with ease and The Magic Touch was definitely one of those books. I flew through this book; not only because I was hooked by the hugely intriguing storyline, but also because Kelly’s style of writing is just so easy to read. It’s light, realistic and extremely funny. She has created her characters with assurance and style…particularly Harry’s Greek family who I LOVED (His mother has the best accent ever!) I love the way that they are loyal to one another to the extreme and I also love how they are always making the most delicious sounding of foods. *drool* Emma had a really strong relationship with the whole family but I particularly liked the friendship between her and Caroline. (I wasn’t as keen on Mas though…) You also really get the sense of the difficulty Emma faces with refusing to marry Harry with him having such a large and close knit family. As soon as you discover a little more about her past you come to understand why she feels the way she does.
Emma made for a great lead character. Her obsession with her phone and social media will resonate with many readers and I thought it was really clever the way in which her addiction to Twitter and Facebook was used to form a vital part of the story. I’m trying not to give too much away here, but you’ll see what I mean when you read the story for yourself.

Kelly has packed so much into this story. There’s love, betrayal (although perhaps not in the way you might think) the complexity of relationships, friendship, humour and there’s a few sobering tear-jerker-type moments as well. It truly is a modern, funny and heartwarming read.
As for the ending – don’t even get me started. We all know that endings can make of break an otherwise excellent read, but the ending to The Magic Touch was perfect and everything I could have hoped for. All the loose ends were tied up and I was left with the soppiest grin on my face.

In case you couldn’t already tell, I massively enjoyed this book and I desperately hope that this is the first of many novels by Kelly Florentia. If she’s not on your bookish radar yet then she is definitely one to watch…

A huge thank you to Kelly for inviting me to review The Magic Touch. ♥

Kelly Florentia was born and bred in north London, where she continues to live with her husband Joe, and where her novels are set. The Magic Touch is her debut.

Before writing her first novel, Kelly wrote short stories, many of which have been published globally in women’s magazines and featured in charity anthologies. To Tell A Tale Or Two… is a collection of 12 of her short tales.

When she isn’t tapping away on her keyboard, Kelly enjoys jogging, reading, and long walks. Hobbies include eating cakes, scoffing crisps, Tweeting, Facebooking, and the odd game of Candy Crush Saga! She is currently working on her third novel.