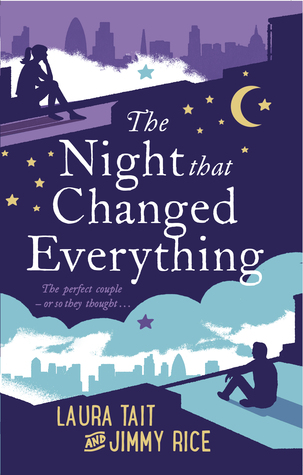 Rebecca is the only girl she knows who didn’t cry at the end of Titanic. Ben is the only man he knows who did. Rebecca’s untidy but Ben doesn’t mind picking up her pieces. Ben is laid back by Rebecca keeps him on his toes. They’re a perfect match.

Nothing can come between them. Or so they think.

When a throwaway comment reveals a secret from the past, their love story is rewritten.

Can they recover from the night that changed everything? And how do you forgive when you can’t forget?

Things are going well for Rebecca and Ben. They might be complete opposites personality-wise, but don’t they always say opposites attract? They’re living together, Ben has met Rebecca’s Dad (AND gained his all important approval) and they’re both looking forward to spending their future together.
However, when a secret is revealed during Ben’s birthday get-together, it looks as though something that happened over a year ago is about to completely blow Rebecca and Ben’s relationship apart…

I had been seeing so much praise for The Night That Changed Everything flying all over the internet, so naturally I was stupidly excited about delving in to Laura & Jimmy’s second novel for myself.
I adored their 2014 debut, The Best Thing That Never Happened to Me, so I’ll admit to having hugeeee expectations…But WOWZER. This novel surpassed them all, it completely consumed me & is probably one of my favourite romantic comedies…EVER.

As a romance fan, I’ll be the first to admit that I don’t easily tire of the fail-safe ‘boy-meets-girl, they get together after a few misunderstandings and live happily ever after’ formula. It’s a classic and you can’t really go wrong with that. However, The Night That Changed Everything completely blew this format on it’s head, as rather than telling the story of a couple falling in love, it illustrates a break-up as we see the couple in question desperately trying to move on with their lives – but have they really fallen OUT of love with one another? I genuinely had no idea and never once felt certain about which direction the story was going to take. This makes it a guaranteed winner in my eyes. Going back to the ‘boy-meets-girl’ formula I mentioned a second ago, unlike so many other novels in this genre, The Night That Changed Everything kept me well and truly on my toes and it was never obvious how things were going to play out. I love a novel that can keep me guessing and sends me into a reading frenzy in an attempt to discover what happens.

Whilst this novel may be centred around a break-up it is in no way depressing. In fact, it’s quite the opposite. Not only is it extremely funny in parts (I’m talking proper laugh-your-socks-off funny) but it is actually quite a beautiful story, too. It shows the importance of friendship, of following your heart and what it really means to have found The One in a relationship.

The characters that Laura and Jimmy have created are absolutely fantastic. Rebecca and Ben make for wonderful leads, but the supporting characters play an all-important role too. I loved visiting Arch 13 and spending time with the gorgeous-sounding Jamie. I also really liked Danielle and Jemma was pretty legendary. (I love how she is always playing ‘Would You Rather’…) Her friendship with Rebecca was a vital part of the story and one that often made me chuckle. I can’t leave out Ben’s work colleagues Russ and Tom, either. Every character, no matter how big or small, played such an important part in forming this story and they’ve all left their mark on me in some shape or form.
The story is told in alternating chapters as we get to hear from Rebecca and Ben with Laura and Jimmy voicing the two characters separately. I feel as though this format worked incredibly well as it gave both lead characters their own unique voice and added to the authenticity of the story. I felt that they were both extremely fascinating characters, but that’s not to say that I always agreed with their decisions. Rebecca was a bit of a tricky one at times and I found her to be quite stubborn. Whilst I completely sympathise with the situation she found herself in, part of me did feel that she was overreacting. I guess this just goes to show that everyone reacts differently to a given situation and it also will get you thinking about how you would react if you were in Rebecca’s shoes. Whilst she was sometimes labelled a bit of an ice queen, I genuinely liked her and she was fascinating to read about. Can her persona be broken down?
As for Ben, well, I found him to be utterly charming and incredibly sweet (he adopts penguins. Enough said.) However he does have the tendency to be overly sensitive, but once again this demonstrates that the characters in The Night that Changed Everything may be flawed, but they are ultimately very real and easy to relate to.

Laura and Jimmy make for a excellent writing duo. I would love to learn more about their writing process and exactly how they go about writing a novel as a twosome. Whatever their secret is they have a winning formula and I am incredibly excited about reading more from them in the future. Their writing really is perfect, the dry humour, the drama, the way they demonstrate the complexity of relationships and the bittersweet storyline. It’s no surprise that Laura and Jimmy have been friends for so long, it’s clear that they know each other inside out and they obviously work incredibly well together.

I just loved EVERTHING about this novel. The characterisation, the humour and (importantly!) the ending. Everything about The Night That Changed Everything was just so RIGHT and it will easily go down as one of my all-time favourite rom-coms.

A huge thank you to Rebecca at Transworld for having me on board the blog tour for The Night That Changed Everything and for the opportunity to review. ♥

Jimmy and Laura became mates while studying journalism at Sheffield University, so sitting in pubs talking about life and love is something they’ve been doing for the last ten years. Now they’re writing books together they just take their laptops and write it all down, but little else has changed. Jimmy still tells Laura off for always being late, and Laura can still drink Jimmy under the table.

Their friendship survives because Laura makes tea exactly how Jimmy likes it (he once took a picture of his perfect brew on Laura’s phone so she can colour match it for strength) and because Jimmy noted Laura’s weakness for custard creams and stocks up accordingly.

One thought on “Book Review: The Night That Changed Everything by Laura Tait and Jimmy Rice”