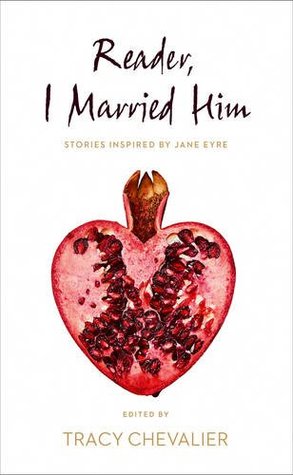 This collection of 20 original stories by today’s finest women writers—including Tracy Chevalier, Francine Prose, Elizabeth McCracken, Tessa Hadley, Audrey Niffenegger, and more—takes inspiration from the opening line in Charlotte Brontë’s most beloved novel, Jane Eyre.
A fixture in the literary canon, Charlotte Brontë is revered by readers all over the world. Her novels featuring unforgettable, strong heroines still resonate with millions today. And who could forget one of literature’s best-known lines: “Reader, I married him” from her classic novel Jane Eyre?

Part of a remarkable family that produced three acclaimed female writers at a time in 19th-century Britain when few women wrote, and fewer were published, Brontë has become a great source of inspiration to writers, especially women, ever since. Now in Reader, I Married Him, twenty of today’s most celebrated women authors have spun original stories, using the opening line from Jane Eyre as a springboard for their own flights of imagination.

I was absolutely thrilled to have been given the opportunity to review Reader, I Married Him. I’ll be the first to admit that I’m by no means a  Charlotte Brontë expert but to enjoy this delightful set of short stories I don’t think you have to be. (Of course it goes without saying that if you are a hardcore Brontë fan then this a a MUST read.)
Even if you haven’t read Jane Eyre, you will surely be familiar with the classic line “Reader, I married him.” and this collection of short stories are all based and inspired (some more loosely than others) on this well-known quote from Brontë. There are some top-notch female authors contributing to this anthology including Audrey Niffenegger, Emma Donoghue, Susan Hill and Lionel Shriver.

On a superficial level this book looks amazing. It’s beautifully designed and I think it would pique the interest of many readers (again, whether you’ve read Jane Eyre or not.)
As for the stories; some I enjoyed more than others. There were a few that I couldn’t quite get into and others that I completely loved. I think this is pretty standard for a collection of short stories though, especially when you have different authors contributing. Some styles are going to appeal to you more than others, but on the whole this is a classic collection of inspiring, unique and fascinating tales. They explore so many themes all based around that one quote; be it unrequited love, unhappy marriages, same sex relationships whilst (mostly) still managing to engage with the original plot of Jane Eyre.

I liked the variation amongst the stories. Set during different time periods, some made me smile, some made me sad, some outraged me and some fascinated me. My personal favourite was probably Dangerous Dog by Kirsty Gunn (in which Mr Rochester is a pit bull terrier. If that’s not a unique twist on the classic tale then I don’t know what it…) Since I First Saw Your Face by Emma Donoghue was also a brilliant executed story which will stick with me, as will To Hold by Joanna Briscoe.
There were some authors contributing to this collection who I was previously unfamiliar with, but I can safely say I will be tracking down more of their books immediately, particularly Lionel Shriver, Salley Vickers and Francine Prose.

I also found the foreword which is written by Tracy Chevalier to be insightful and fascinating as she explains how during the Victorian age you’d perhaps expect the classic line to be ‘Reader, he married me’ as appose to ‘Reader, I married him’, This cements Jane’s defiance and influence as she states that it is SHE who chooses to be with Mr Rochester, not (as expected during this era) the other way round.

All in all a really inspiring and interesting collection. Depending on your preferred style of reading, I would recommend reading one of two stories from this collection a day in order to really appreciate each one. A great collection for fans of Jane Eyre and fans of strong, insightful fiction alike.

A huge thank you to Hayley from HarperCollins for the opportunity to read & review Reader, I Married Him. ♥

2 thoughts on “Book Review: Reader, I Married Him. Edited by Tracy Chevalier”