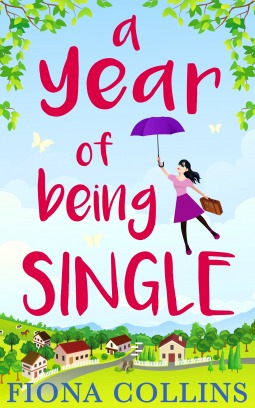 BEST FRIENDS IMOGEN, FRANKIE AND GRACE DECIDE TO TEST WHETHER THE GRASS REALLY IS GREENER ON THE SINGLE SIDE OF THE FENCE…

IMOGEN is supposed to be on the most romantic weekend of her life and instead she’s quickly realised that her current boyfriend definitely isn’t ‘The One’ and actually One Big Mistake.

FRANKIE is fed up. Fed up of her good-for-nothing husband and her four, unappreciative children. Well, they hardly notice her anyway, maybe it’s time to shake it up a little…

GRACE thought she had the perfect life. Gorgeous little boy and perfect, hardworking husband. Or rather, she did, until she realised her husband was shagging his ‘work’.

It’s time for a change – and to ditch the men who are dragging them down! It’s time for A Year of Being Single. Swearing off men, these single ladies don’t need to put a ring on it…right?

When we first meet friends Imogen, Frankie and Grace, they are each experiencing their very own ‘silent scream’ moment. Imogen has jetted off to Paris, the most romantic city in the world, for a loved-up weekend; however the man that she’s with couldn’t be less romantic. In fact it’s not long before Imogen is longing for the weekend to be over so she can give Dave the boot.
Frankie’s ‘silent scream’ moment involves feeling massively unappreciated by her lazy husband and four (rather manic) children. Whilst Rob goes out to work, he believes that because Frankie is a ‘housewife’ she should therefore do all of the household chores (including picking up his dirty pants from the floor. Eurgh.) as well as looking after all the children. Frankie has had enough, she feels as though she has given up her identity to be a wife and mother and longs for five minutes peace. She soon realises that things have to change…
Then there’s Grace. Happy, content Grace with her perfect little family. A lovely little boy and a husband who adores her. In fact he adores her so much that he decides to cheat on her with a work colleague, completely breaking Grace’s heart as her whole world comes crashing down.
These three friends are completely through with men. So much so in fact that they concoct a plan to stay single for a whole year. Who needs men? They are independent, strong willed woman and quite frankly, men aren’t worth the hassle. Swearing off men for a whole year will be a piece of cake…

I absolutely LOVED the premise for this story; three empowered ladies who finally decide to ditch the men who were dragging them down and attempt to live their lives men-free for a whole twelve months. That shouldn’t be too difficult, right? Well, not exactly…
As soon as I met the three lead characters I knew that the next twelve months were not necessarily going to be easy for these ladies. I didn’t foresee that Imogen would have any problems. Ballsy, outgoing and not afraid to speak her mind, Imogen is really the driving force behind the idea. However, things really get interesting when she meets Richard. A hunky American, I don’t think I would have blamed Imogen for giving in…The relationship dynamics between the two were brilliant and I couldn’t wait to find out what was going to happen. Imogen was probably one of my favourite characters (although I loved them all!) She always made me laugh & follows the mantra that ‘Shoes maketh the man’. I agree.
I really liked Frankie and felt for the situation that she’d found herself in. No one likes to feel unappreciated, but her situation was magnified by about a million, especially with her husband, Rob’s, attitude (who thought that if his wife wasn’t at work she should basically do EVERYTHING at home). I felt proud of her when she kicked Rob to the kerb and stood up for herself.
Then there’s Grace. Sweet, quiet, lovely Grace. She was the least keen on doing the whole single-for-a-year thing and I wondered if she was going to struggle. She is heartbroken over her husband cheating and breaking up her perfect family, but I was intrigued to see as to whether she’d stick by her guns or not…
The three leads are wonderful characters who were great fun to read about. You’ll warm to them whether you’ve found yourself to be in a similar situation or not. I really liked the fact that these characters were older than the usual twenty-somethings that can usually be found in this genre. I think this will enable a lot more readers to identify with them and provides something just that little bit different.
Fiona’s writing style is wonderful and packed with warmth and humour. (Believe me there are PLENTY of laugh-out-loud moments to be found within these pages!) The story is based on a fantastic idea and is a light, sweet, endearing and fun-filled read. The perfect companion to a sunny afternoon, I’m already looking forward to more from Fiona…

A huge thank you to publishers, Carina, for approving me to read A Year of Being Single on NetGalley & to Jennifer from Harper Collins. ♥

Fiona Collins lives in the Essex countryside with her husband, three children and the noisiest cat in England, but also finds time for a loving relationship with a Kindle.

She likes to write feisty, funny novels about slightly (ahem) more mature heroines. She writes furiously at her kitchen table whilst the children are at school. She often startles the postman by coming to the door wearing a hideous cardigan and shortbread crumbs.

Fiona studied Film & Literature at Warwick University and has had many former careers including TV presenting in Hong Kong; talking about roadworks on the M25 on the radio; and being a film and television extra. She has kissed Gerard Butler and once had her hand delightfully close to George Clooney’s bum.

When not writing, Fiona enjoys watching old movies and embarrassing her children, especially when they have friends over. She dreams of hiring a cleaner and someone to pick pants off the floor.

4 thoughts on “Book Review: A Year of Being Single by Fiona Collins”