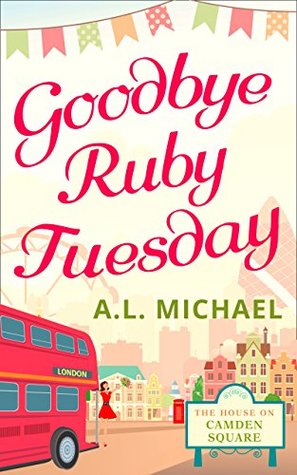 Four friends have become three. But that’s only the beginning.

Ruby, Evie, Mollie and Chelsea were the bad girls at school. But Ruby was the baddest. Evie fought her anger, Mollie fought her mother and Chelsea…well, Chelsea just fought. But Ruby set her sights on a bigger stage. And together, they dreamed of a future where Ruby could sing, Evie could make art, Mollie could bake, Chelsea could dance – and all of them could finally feel at home.

A decade later, the girls are reunited for the funeral of Ruby, who took the world – and the charts – by storm, before fading too soon. And Evie doesn’t know whether to laugh or cry when she learns that Ruby has left them a house on Camden Square – the perfect place for them to fulfil their dreams. But does she dare take the plunge, and risk it all for one last shot at the stars?

Growing up together, Ruby, Evie, Mollie and Chelsea were the best of friends. Whilst causing havoc at school, the four girls naturally dreamt about their futures and how they envisaged spending the rest of their lives. As is so often the case, the girls found themselves drifting apart as they grew up, with Ruby going on to make it big and the other three following paths that they didn’t necessarily envisage.
However, ten years later the girls are reunited after Ruby’s untimely death. Returning to the little town of Badgeley for her funeral, Evie, Mollie and Chelsea end up getting a lot more than they bargained for when they discover that Ruby has left them a house in Camden Square. This isn’t just any old house though, ohhh no. This is the house for the three girls to use to follow their dreams. Intrigued? You certainly will be…

I couldn’t wait to dig in to this book. I love A.L. Michael’s books anyway so I knew I was in for a treat. Another thing I love is stories that centre around reunions; especially when it’s friends who went to school together. I’m not entirely sure why I love this topic so much, but it has always been one that has fascinated me. I love reading about the dynamics between the friends, how they’ve evolved, who they’ve become etc. Whilst this topic has been covered many times before within this genre, A.L. Michael has provided a completely new take on the story with the friends inheriting the house from Ruby. I was massively intrigued to see how things would play out. How would the girls react when they learnt of the news? Did their lives turn out the way in which they had imagined? Would they take Ruby up on her offer and decide to follow their child-hood dreams? I couldn’t wait to find out…

Ruby, Evie, Mollie and Chelsea made for great lead characters. You might wonder how Ruby can be a lead character when she’s technically dead (the book starts at her funeral) but through flashbacks, discussion and memories from the other girls, you will have no trouble forming a picture-perfect image of Ruby in your mind. I loved learning about her; she was such a fun, interesting and dynamic character.
All of the girls were a fascinating to read about but I think that I warmed to Evie the most as she is really the central character in the story. I loved reading about the girls’ friendship and was especially interested to see how they would re-connect.  I think one of the reasons I developed such a soft spot for these characters was because they all seemed very ‘real’ to me. They were flawed and experienced the same difficulties in life that we all do, which made them both likeable and easy to relate to. I have also found these four to be characters who have stuck in my mind after finishing the book and I find myself randomly thinking about them (usually when I should be doing something else…e.g working/sleeping/concentrating…) That shows that they made an impact on me and I always think that’s the sign of a good writer if their characters can do that.

Now, this is an A.L.Michael book, so OF COURSE there is a sprinkling of romance within these pages. As always it’s done in such a way that it complements everything else that is going on in the story wonderfully and is always exciting and never predictable.
I am also thrilled that this book is going to be the first in a series, as I must admit that this is probably my favourite A.L. Michael book so far (but I love them all!) It was just such a refreshing, uplifting read and a real page-turner at the same time. I love books that can transport you into someone else’s lives for a few hours and completely take your mind off all of your worries and Goodbye Ruby Tuesday did that for me in abundance.

Not only was it brilliantly written, but it had a hugely entertaining story at its heart with great characterisation. Plus it has a BEAUTIFUL cover… What more could you want?

A huge thank you to Sara at Carina for sending me a copy of Goodbye Ruby Tuesday for review. ♥

She’s a fan of cheap wine, expensive chocolate and still wants to be a secret agent when she grows up, but she’ll settle for lying on the page.