I am thrilled to be joined by the wonderful Elaine Everest on Bookaholic Confessions today. Elaine’s latest novel, The Woolworths Girls, was released on the 5th May with Pan Macmillan and it’s one that I am very much looking forward to reading. I am fascinated by books set during the war years, so naturally I had lots of questions for Elaine about the research she did for her novel and where she finds her writing inspiration… 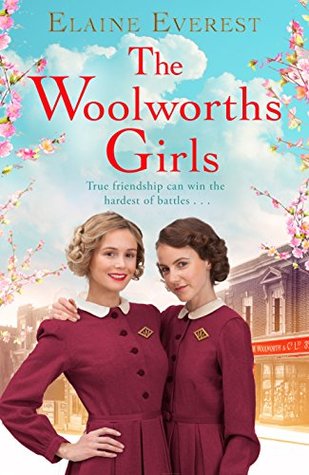 I live in Swanley NW Kent with my husband, Michael, and Polish lowland Sheepdog, Henry, not far from Erith where I lived for many years and where The Woolworths Girls is set. I’ve been a freelance writer for many years producing over sixty short stories, many features for magazines and newspaper worldwide and non-fiction books for dog owners. The Woolworths Girls is my second novel and first for Pan Macmillan.

Can you tell us a bit about your debut new novel, The Woolworths Girls (released in paperback on the 5th May 2016 with Pan Macmillan)?
The Woolworths Girls starts at the end of 1938 as England faces the threat of war. Sarah has moved to the town of Erith, on the south bank of the River Thames, to live with her Nan, Ruby. Seeking work she attends an interview at Woolworths and meets Maisie and Freda. The three soon become good friends as they face what life throws their way as war starts. Sarah also meets assistant manager Alan Gilbert and romance blossoms.

I am really looking forward to reading The Woolworths Girls. Its set in such a fascinating period of history and Woolworths is such an iconic store. What was your inspiration behind the story?

I love to set my sagas in NW Kent and Erith is a favourite town as I was not only born there but also purchased my first home in Alexandra Road when first married. The street will be familiar to readers as it is where Ruby and Sarah live. As the idea for my story grew I knew that Sarah would need to find work and that is where the major parts of the book would be set. Looking back to the Erith of 1938 one of the major stores in the town was FW Woolworths. Having been a Saturday girl at a nearby Woolworths in Dartford whilst still at school I had a fondness for the company. Also, the Erith Woolies would have been the same store I visited to shop when a child until it burnt down in the early seventies. So, the girls’ fate was set – they were to work at Woolworths and become The Woolworths Girls.

Are your three female lead characters, Sarah, Maisie and Freda, entirely fictional or are they based on anyone in real life?

The girls are entirely fictional but I like to think they are based on women of the thirties and forties who had to face years alone whilst their menfolk fought on foreign shores whilst holding down vital jobs and caring for their families.

How did you go about doing any relevant research when writing The Woolworths Girls?

I know the area well and grew up listening to stories about the lives of locals from family and friends so already had a taste of the area. The London Borough of Bexley has a very good archive that contains images and news of the time I write about. Although Erith is now part of the greater London area it is still part of Kent. A godsend was The Woolworths online museum where I spent many hours reliving the Woolworths years.

Novels set during the wartime make the most fascinating yet frightening of stories. What is it you enjoy most about writing novels that are set during this period of time?

I love that my female characters have much to face and even tough times are hard and they may have slept in an Anderson shelter every night they can still bring up their children and put food on the table as well as hold down a job. They didn’t worry about their ‘rights’ and equality but got on with life the best they could. Most were strong women and they are always a joy to write about. Also, even though the nation was ‘pulling together’ there were still bad people that add depth to my stories. I love a baddie!

As well as writing full-length novels you have also written short stories. Do you prefer writing one over the other? How does your writing process differ for short stories compared to novels?

Apart from being able to write a short story in a day and selling it quickly I find that short fiction feeds different markets. I love writing for the Women’s’ magazines as there is a community of womag writers that I’ve known for years. When writing a novel without a contract writers are investing a lot of time in a project that may never see the light of day. When writing a novel I have to plan timelines, create characters and plot as well as research the setting before I fire up my computer. With a short story I can run with an idea in my head and just write. As a writer I need to be able to write short fiction and novels as well as features to be able to pay my mortgage!

I love to read crime and psychological dramas and enjoy books by CL Taylor and Val McDermid. However I enjoy revisiting books by Dick Francis and Dennis Wheatley. I like to keep up to date with fellow saga writers and amongst them I’m a fan of Kate Thompson and Lilian Harry.

I’m deep in edits for my next book The Butlins Girls (Pan Macmillan) that will be published in early 2017. My story starts in Erith in 1946 and then moves to Butlins at Skegness as Billy Butlin begins to open his holiday camps after WW2. Readers can expect a wonderful love interest for my main character, Molly, as well as one of my characters from The Woolworths Girls making an appearance. I loved writing this book as much as I did The Woolworths Girls and I hope my readers enjoy it too.

A huge thank you to Elaine for answering my questions and to Sophie at ed pr. ♥