BREAK-UPS, THE CUTTING-ROOM FLOOR, AND THE WONDERS OF SELF-EDITING
By Lorelei Mathias

Hello. Thanks for having me, Holly! Today I’m going to be introducing you all to two of the most essential rules of Break-Up Club, and then I’ll walk you through why they are so important…

#6 No Face-Stalking. Exes should be un-friended no later than 48 hours after a break-up. Phone numbers should be deleted or re-saved under the name ‘Don’t Answer’.

#10 – For their own protection, members must respect the N.G.Z. (No-Go Zones) imposed by a break-up. N.G.Z.s fall into three categories – Locational, Musical and Gifting.

Now, both of these rules exist to encourage the importance of filtering your own thoughts, which is a practice most essential to any break-up. I promise you – it really helps!

Because editing is a big part of how you get over someone, I made my main character Holly an editor by profession. Holly doesn’t see much daylight. Her office probably looks much like this:

We might not all sit in a windowless broom-cupboard like Holly does all day, but we are all editors in another way – of our own thoughts. And we have the choice to be ruthless editors, or shitty ones. Generally our happiness depends greatly upon us being the former. But never more so than during a break-up when, let’s face it, your mind is actually not your friend!

As it turns out, Holly’s a ropey editor. She is forever replaying ‘old footage’ of her memories with her ex, Lawrence. If she’s not doing that, she’s projecting imaginary future scenes of them, just to taunt herself, like she does when she pictures them both going to Cuba:

Closing her eyes, she could see them now, rising to thirty-five thousand feet

while laughing at his lame jokes and tucking into trays of dubious food. And even

though she knew she should turn off The Holly and Lawrence Show, stop indulging in

it and get on with her life in this dimension, she couldn’t; it made such compulsive

The patch of sand on the beach that would no longer be sat on. The waterfall

that would not be snogged under, á la Tom Cruise and what’s-her-name in Cocktail.

go searing high over the rooftops. The Mojitos that would remain un-drunk. The floor-boards that wouldn’t witness their awkward attempts at Salsa. The photographs

that wouldn’t collect up on her memory disc, some well composed, some with

Lawrence’s finger in the top right corner. One by one, she pictured all the scenes that

would now never be.

Aw…what a muppet she is! Seriously, one of my personal break-through moments in getting over a break-up was realising that this behaviour – ruminating in old memories like that – is all just self-harm. And once you realise you’re doing it, it’s easier to snap out of. It took a best friend to tell me that though – and it really helped – that’s why I’m sharing it!

What takes Holly the whole book to realise, is that she’s a rubbish editor, both in life and in art. In the end, the only way she can really move on is by pressing pause on the old scenes, ‘deleting the tape’ and filling it with new material that doesn’t involve him, and instead involves her own creative passions.

Now, not to go all Science on your ass, the more you continue to watch those old re-runs of memories with you and your ex, the more you’re just re-inforcing those neural pathways and strengthening them so you’ll NEVER forget that great love, and NEVER move on emotionally!

The marvellous news is: there’s something in SCIENCE called Neuroplasticity (Hurrah!). It basically means that these old break-up pathways you’ve been rolling around in like a pig in shit – they aren’t set in stone. Stop feeding them, and then they can actually be destroyed and then completely rebuilt! And the more you take control of your neural pathways, the more quickly you get to your happy, pain-free Mind Palace. Boom.

Put simply – stop delving in the mental archives and regurgitating old memories. Throw them to the cutting-room floor, and rejoice in how much lighter you feel! Fill your brain with new, shiny stuff,.. which in turn helps your heart to heal. Easier said than done, I know, but maybe when you see there’s a bit of ‘Science’ there, it’ll help you refrain from indulging!

And, until the Eternal Sunshine brain-wipe machine exists, this is all we’ve got. Apart from building a bonfire. That’s good too.

Because editing is such an important theme in the book, my brilliant editor Natasha and I thought it would be fun to share some of the ‘Deleted Scenes’ that I had to cut from the novel itself. You can find them at the end of the book, in the manner of a DVD Special Features section!

A huge thank you and Happy Publication Day to Lorelei Mathias! ♥ 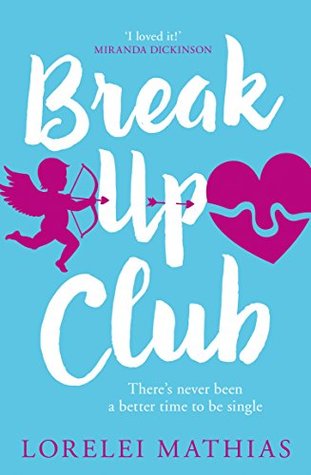 THERE’S NEVER BEEN A BETTER TIME TO BE SINGLE . . .

Holly Braithwaite and loveable loser Lawrence have been together for five years. But the obvious cracks in their relationship can no longer be ignored and Holly soon finds herself saying ‘it’s not me, it’s you’.

In the shock aftermath of their break up, Holly finds unlikely companions in Olivia, Harry and Bella. Together, they form the Break-Up Club, as they support each other through their mutual melancholy and find ways to love, laugh and function as human beings again.

Break-Up Club meets every Sunday. Each week, as the comedy and drama unfolds, they discover a new BUC ‘rule’. And, one by one, the rules become vital markers on their journey to recovery . . .

‘BREAK-UP CLUB’
To our members, we’re the first emergency service

Click to get hold of your copy of The Break-Up Club in paperback or ebook.