Jenna always woke from her morning nap at about twelve thirty, so Penny had some fruit cake with a milky cup of coffee and flicked through a magazine, all the while feeling a creeping anxiety about how Mavis would react to the email. Mavis was no pushover and would recognize Penny’s bluffing for what it was. She was beginning to regret sending it. But what was the worst that could happen? Mavis refusing point-blank to write anything? So what. Penny would do as she threatened, find a new writer, pay them a quarter of Mavis’s fee, and stuff her.

She heard Jenna’s little voice calling from her cot upstairs.

‘Coming, darling!’ responded Penny, and she put all thought of Mavis out of her head.

Penny loved Jenna with a fierceness that was almost as big as the fear she had that she was not good enough to be her mother. She would gladly die for her, but the endless hours of playing peekaboo and looking repetitively at the same old picture books, pointing out the spider or the mouse or the fairy, was killing her. There were days when she couldn’t wait to put Jenna to bed and then, while she was sleeping, would be riven with the horror of not being good enough.

She watched in envy as the young mums in Pendruggan appeared to revel in picnics on the village green, swimming lessons, tumble tots, musical games and the endless coffee mornings with other women trading their inane chatter.

Penny had been invited to one once. As vicar’s wife she tried to do the right thing, but the amount of snot and sick and stinking nappies – not to mention stories of leaking breastpads and painful episiotomies – really wasn’t her thing.

The truth was she missed work when she was with Jenna, and she missed Jenna when she was at work. Her love for Jenna was overwhelming, so big that it was impossible to connect with it, but . . .

She missed an organized diary, a clear office with regular coffee, and power lunches.

She missed flying to LA. She missed being in control of her life.

And she missed her London flat.

She had kept it on when she married Simon, telling him that it would always be useful, a bolthole for both of them, although neither of them had been there since Jenna was born.

But Jenna was here now. Here to stay. How could Penny be lonely with this beautiful, perfect, loving little girl who depended on her for everything? Penny looked at her daughter, sitting in her pram, ready for a trip to Queenie’s village shop, just for something to do. She bent down and tucked the chubby little legs under the blanket. ‘It’s cold outside.’ Jenna lay back and smiled. ‘I love you, Jenna,’ said Penny. Tears pricked her eyes. She angrily wiped one away as it escaped down her cheek.

‘Mumma,’ said Jenna. She held her hands out to Penny. ‘Mumma?’

‘I’m fine. I’m fine, darling,’ Penny said with a tight throat. She found a tissue in her coat pocket and wiped her face. ‘Now then!’ She stretched her mouth into its trademark grin. ‘Let’s go and see Queenie, shall we? She might have some Christmas cards for us to buy.’

‘’Ello, me duck.’ The indomitable Queenie was sitting behind her ancient counter opening a box of springy, multicoloured tinsel. ‘’Ere, ’ave you ’eard the latest?’

‘Nope,’ said Penny. ‘It’d better be good because I’m starved of news. Jenna’s not too good a raconteur yet.’

‘Ah, she’s beautiful. Wait till she does start talkin’ – then you’ll want ’er to shut up. Give ’er ’ere. And pull up a chair. You look wiped out.’

Penny sank gratefully into one of the three tatty armchairs that had appeared recently in the shop. Queenie liked a chat and most of her customers enjoyed a sit down.

‘Ain’t it? Simple Tony got them for me over St Eval. Someone was chucking them out.’ Queenie sat down with Jenna on her lap and Jenna reached up to pull at the rope of pink tinsel Queenie had thrown round her shoulders. ‘Real pretty that is, darling, ain’t it? When you’re a big girl you can come in ’ere and ’elp me get all this stuff out.’

Jenna crammed a thumb in her mouth and sucked it ruminatively.

Penny shut her eyes and enjoyed the peace. ‘Tell me the gossip then, Queenie.’

‘Well, you know Marguerite Cottage what’s just behind the vicarage?’

‘Oh God, yes. The builders have been making a racket for months.’

‘Well, I had the estate agent in here the other day. Come in for her fags. Silk Cut. Not proper fags at all but that’s what she wanted. Anyway, I asks her, “Oh, who’s buyin’ Marguerite, then?” and she says, “It’s been let for a year by two fellas from up country.” I says, “Well, good luck to ’em if they’re ’appy together.” And she says, “One of them is a doctor and the other an artist.” So I says, “Stands to reason. These gay boys are very arty and nice-natured.” And she says, “They’ve got dogs, too.” And I turn round and say, “Well, they always ’ave dogs.” And she turns round and says—’

Released 2nd June with HarperCollins. Click to pre-order your copy in hardback or ebook. 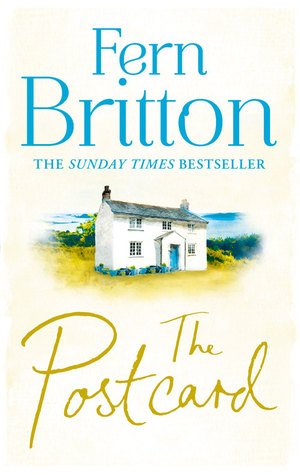 Secrets. Sisters. The summer that changed everything . . .

Life in the Cornish village of Pendruggan isn’t always picture perfect. Penny Leighton has never told anyone why she’s estranged from her mother and sister. For years she’s kept her family secrets locked away in her heart, but they’ve been quietly eating away at her. When an unwelcome visitor blows in, Penny is brought face to face with the past. And a postcard, tucked away in a long-hidden case, holds the truth that could change everything.

Young Ella has come back to the place where she spent a happy childhood with her grandmother. Now she’s here to search for everything missing in her life. Taken under Penny’s broken wing for the summer, the safe haven of Pendruggan feels like the place for a fresh start. Soon, however, Ella starts to wonder if perhaps her real legacy doesn’t lie in the past at all.

Fern Britton, an English television presenter, was born on 17 July 1957 in Ealing, London. She was educated at Dr Challoner’s High School in Little Chalfont and underwent training in stage management at the Central School of Speech and Drama. She is the daughter of the English actor, Tony Britton and Ruth Britton. Fern Britton spent the early days of her life at Buckinghamshire. Her older sister, Cherry Britton, is a script writer and her younger half brother, Jasper Britton, is an actor. She is married to the celebrity chef, Phil Vickery and lives with her family at Holmer Green in Buckinghamshire.