When asked about my typical writing day, I feel a little flash of envy for people who have a typical day! I’d like to say that I wake up early with the sun and the birds, put on a pot of coffee, and sit in my cozy little study typing away for hours without any distractions. And some days, that’s true. It’s also true that some of my writing is done during my three hour long commute on the M25 to my job where I work as a lawyer (don’t worry – I pull over to the side of the road if inspiration strikes). In fact, I dictated an entire novel in the car a few years back. Back in the good ol’ days before I had three children, I used to require silence and a long stretch of time to get any work done at all. Now, I’m often lucky to get a 15 minute uninterrupted stretch – normally to the backdrop of cbeebies, the ipad, or squabbling children.

I guess it all goes to show that where there’s a will, there’s a way. When I’ve got a story to tell, I’ll do anything to try and tell it. And in a way, I think my writing is better for a healthy dose of chaos. I’ve learned to let my thoughts flow more freely – tinker less with the words, and strive to get the ideas down on paper. I’ve also begun doing much more plotting and outlining than I used to do. I’m not too restrictive in this process – I just try to make sure I have a beginning, a middle, and an end, and a few milestones along the way. The rest is just editing! And finally, having had my debut novel Finding Home published, I’m starting to believe that I can do this writing thing. I’m one of the many writers out there who in the past has suffered a little too easily from crisis’ of confidence – and I’ve got a shelf of novels that I’ve never even tried to get published to prove it!

While I’ve always been good at taking on board feedback and constructive criticism, I’m learning to have more belief in my own choices and decisions as an author. During the almost six years it took me to finish Finding Home, I received a lot of conflicting feedback – mostly about what ‘box’ it would fit into in the publishing world. Is it a romance? A mystery? A comedy? I wanted it to be all three. In the end, I went with that vision, and was lucky to find a publisher – Aria (Head of Zeus) – that was willing to take a risk on something a little different.

Overall, I’m very grateful that Finding Home is finally out there, and I’m enjoying working on a new novel that I’m hoping will be out next spring. And while I don’t think my life is going to get any less chaotic in the near future – in a way, it makes me appreciate all the more how much I love being a writer and what an important part of my life it is.

So next time you’re on the train and see someone with a notebook, or driving on the M25 and see a strange woman with a headset – give a wide berth. Because if I see you – you never know . . . as they say: ‘careful, or you may end up in my novel’!

Click to get hold of your copy of Finding Home in eBook or paperback published by Aria, Head of Zeus on 1st April 2016.

A huge thank you to Lauren Westwood and to Blake at Aria. 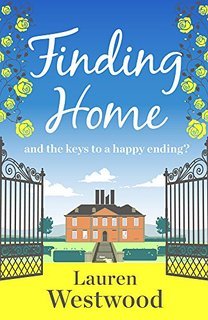 If you save a crumbling mansion, will it mend a broken heart? Feel-good, warm and romantic, FINDING HOME is perfect for fans of Carole Matthews and Milly Johnson.

A month ago, Amy Wood had her perfect home, her perfect boyfriend and her perfect job. Now she is broken-hearted, living in her parents’ tiny bungalow, and working in local estate agents in Bath.

At least her new job keeps her busy. Rosemont Hall is a crumbling mansion riddled with woodworm, dry rot – and secrets. As Amy searches for the perfect owner to restore the house to its former glory, she begins to uncover pieces of the past that some people would rather remain hidden.

In her battle to save Rosemont Hall, Amy will encounter scary housekeepers, evil property developers and handsome American heirs – and will discover whether the secrets of the past can bring her closer to the future of her dreams…

One thought on “Guest Post: Finding… Time To Write by Lauren Westwood”