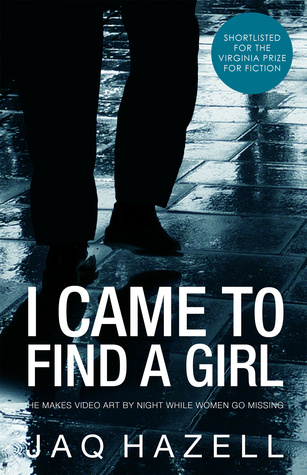 “I was happy to hear Flood was dead. I wasn’t as happy as I thought I’d be, but I was happy all the same.”

A complex game of cat and mouse in the seedy streets of Nottingham ends in death. Young artist Mia Jackson is compelled to watch the posthumous video diaries of Jack Flood – controversial bad boy of the London art world and convicted serial killer. Can Mia allow Drake Gallery to show Aftermath, in their retrospective of his work? Muse or victim, why was she allowed to survive?

When fine-art student Mia meets famous and controversial artist Jack Flood she is immediately enthralled. She agrees to accompany him for a drink, unaware that the actions of that night will change the course of her life forever.
Meanwhile a spate of young girls being murdered in the rough area of Nottingham where Mia is living catches her attention and starts to unnerve her. Things come to a head when one of her close friends and co-workers, Jenny, goes missing. Mia becomes obsessed with Jenny’s disappearance and becomes increasingly frightened for her own welfare, especially when Jack Flood keeps reappearing in her life at the most unexpected of moments and reminding her of something she’d rather forget…

Seeing as I have developed quite a thirst for psychological thrillers of late, I have been really excited about delving into I Came to Find a Girl. It’s been sat on my TBR for ages and after absolutely devouring this dark, twisted and hugely exciting novel, I am only sorry that it’s taken me so long to discover Jaq Hazell. Wow. What a writer. Cleverly crafted, I Came to Find a Girl is ultimate edge-of-your-seat stuff. The format in which the story unfolds contributes to its unnerving nature. Partly told through Mia’s memories and partly told via a video diary that Jack Flood kept (He had a habit of filming everything. No matter where he went or who he met, he would record it on camera.) This also helps to build up Jack’s rather creepy persona. You can dress it up as much as you like, some would argue that it is all part of Flood’s artistry, but the truth of the matter is he is odd. Not only did he freak me out but I also grew to hate him. When a character can evoke such strong emotion in me I know that the writer has something special. This man made my skin crawl. The way he behaved, his treatment of Mia, his treatment of women in general. He made me shudder and at the same time I was spookily fascinated by him. I was also convinced he was hiding something. I thought I knew exactly what he was hiding but I turned out to be mistaken…
I also really liked Mia. There were times when she frustrated me but I felt her anguish, I felt her frustration and, most strongly of all, I felt her fear. I really enjoyed seeing how her character developed over the story and I liked the way that this change was mirrored in her artwork. This was a really clever and perceptive touch which tells you so much more about her character than words alone could.
Which brings me on to Jaq Hazell’s writing. She plotted and weaved this story in such an intricate way. You cannot help but make assumptions throughout the story, but Jaq is careful to never give too much away with her writing, which will keep you guessing right up until the very last page. The way that the story jumps back and forth in time enables you to watch the events unfolding before your very eyes which will ensure that you are thoroughly gripped and will leave your desperate to find out what’s going to happen.
Jaq’s storytelling is fantastic. She is such a clever writer and one who will challenge your perceptions. The premise of the story is also one that will get you thinking; the impact that meeting one person can have on your life and how the decisions we make can play such a vital part not only in our own lives, but also in other peoples.

Dark, compelling and hugely engaging, if you are a fan of psychological thrillers but looking for something just that little bit different, then I highly recommend giving I Came to Find a Girl a read. It’s gripping, full of atmosphere and will leave you feeling pretty spooked…

A huge thank you to Jaq for very kindly sending me a copy of I Came to Find a Girl for review.

Born near Portsmouth, on the south coast of England, Jaq studied Textile Design at college, and her first full-time job was at Buckingham Palace. She has also worked as a humorous greetings cards designer and a journalist.

Shortlisted for The Virginia Prize for Fiction and The Jane Austen Short Story Award, Jaq has had work published in various anthologies.

She has an MA in creative writing from Royal Holloway, University of London, and writes fiction for adults, children and YA. She lives in London.

One thought on “Book Review: I Came to Find a Girl by Jaq Hazell”